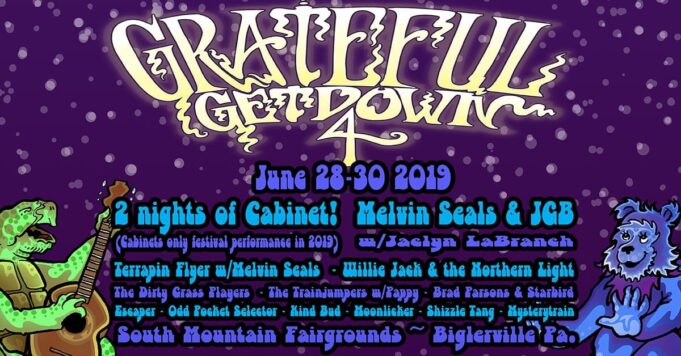 A Bear’s Picnic is excited to announce the 4th Grateful Get Down, taking place at South Mountain Fairgrounds in Biglerville, PA on June 28-30th, 2019. This year’s event will feature the return of Melvin Seals & JGB along with 2 nights and 4 sets of Cabinet in their only festival performance in 2019. The rest of the lineup includes Willie Jack & the Northern Light, The Dirty Grass Players, The Trainjumpers w/ Pappy (of Cabinet), Brad Parsons & Starbird Escaper, Odd Pocket Selecto, Kind Bud, and more.

The South Mountain Fairgrounds and the Grateful Get Down boast plenty of room to spread out and camp on flat ground, two stages with music running until 4:30 AM, flush toilets, shaded areas, electric & water sites, a family camping area, craft & food vendors, and much more. This is a BYOB event. RSVP to the Facebook event at this link and buy tickets here. Tickets are on sale now!

Ticket tiers are listed below:

This is an all ages event, but all kids ages 17 and under MUST be accompanied by a parent or legal guardian. Children ages 12 and under are FREE with ticket-holding parent.

Melvin Seals has been a powerful presence in the music industry for over 30 years with a long-established reputation as a performer, recording artist and producer. Melvin is most revered for his powerful, high-spirited, Hammond B3 organ, and keyboards in the Jerry Garcia Band. Melvin spun his B3 magic with the Jerry Garcia Band for 18 years and in doing so helped pioneer and define what has now become “jamband music.” From blues to funk to rock to jazz, Melvin Seals serves up a tasty mix with a little R&B and gospel thrown in to spice things up. The group is gearing up for a busy festival season, with appearances at Grateful Get Down 4, Jerry Jam in NH, the Werk Out in OH, and more.

Cabinet’s last live show together was headlining a New Year’s Eve Extravaganza in New Cumberland PA, which is also organized by A Bear’s Picnic. Garnering a huge local following and touring the country since forming in 2006, the band declared an “indefinite hiatus” in late 2017, playing a farewell concert later that year on New Year’s Eve. They have since split into various other projects, including solo efforts by Pappy and JP Biondo, Pappy’s Kick & Banjo duo, and an experimental Americana/funk/blues band called Gatos Blancos. Drummer Jami Novak continues to play in the Village Idiots as well as local bands like The Dishonest Fiddlers. Cabinet released their last studio album, Cool River around the time of their indefinite hiatus announcement. With all this in mind, fans would do well to snag their tickets to the Grateful Get Down to catch their band before they go back into hibernation!

Have questions? Contact the organizers at [email protected] or call their hotline at 570-898-5525 between the hours of noon to midnight.