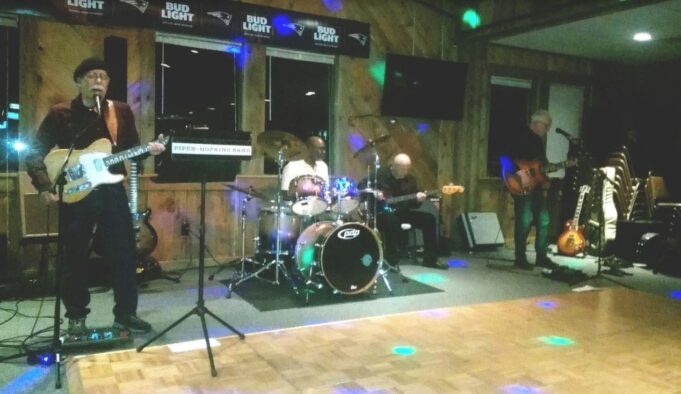 That’s how Piper-Hopkins do their thang: “swampy.”  I can’t imagine why that particular, perfect word hasn’t come to mind before now. I’ve been listening to these guys since back before they even thought of changing their name from Roadhouse Band.  But come to mind it did, and right quick tonight, seconds after I walked in the door.  “Swampy.”  Yep, that’s it.

We might think up a name for their slice of Americana as maybe something like, say, “Blue-Eyed Blues.”  They are certainly smack-dab in the Blues genre; wouldn’t nobody try to say otherwise, but they spin so soooul-ful that ya gotta factor that in.  And we wouldn’t want to edge them out of an assignation of Americana; this is Green River and noon-to-dawn porch party stuff.  They bring da funk, too, in their white-ish kinda way, but it’s a slinky thing- not so much the POW-pow punch as a groove thang.

Piper-Hopkins ‘owns’ JJ Cafe’s “Cajun Moon” for example, and it is exactly that kind of swing -or schwang- feel that they carry like a principle put to practice in their whole sound.  So: slinky, swanky, and just this side of skunky, what we got here is a Swampy mix.  A little taste of New Orleans in New England comes with the package that is Piper-Hopkins.

Spicy Jason Arnold and Paulski the Rock make for a dream team rhythm section; they are both comprehensively versatile and solid in the pocket.  They can handle pretty much everything, and handle it well and make it look easy, too.  Steve Piper’s  voice is exactly right for this swampy sound- gritty with a road-worn quality, we can hear that whistle blow as the train rolls down the tracks of time and tradition.  Carl Hopkins’ guitar is just as rooted in respect for the forefathers as is Steve’s singing, and then some.  He is one of the very top-most players in this part of the country- using the phrase ‘this part’ just to be generous to all the others, from The City to the West Coast- and ya gotta wonder how’s come we so lucky around these parts that he settled his soul here in the hills of the ‘hood known as New England.

Funny thing, though- I slipped their just-procured CD-EP (but a year old, whaaat- how’d that slip by me?) into the player on the way home… imagine my surprise when I heard half-a-dozen decidedly country songs.  No complaints here; just not what I expected.  Otherwise, the recording exceeded my quite-high expectations.  It’s a great listen.  But that’s another story.