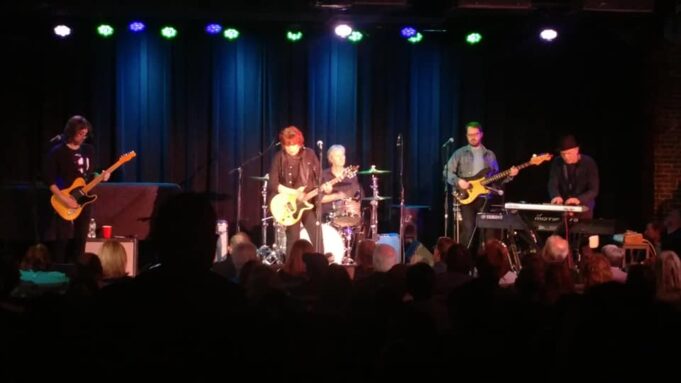 Performing live at the Natick Center for the Arts April 13, 2019

I had the pleasure of watching Martha Davis and The Motels at the Natick Center for the Arts Saturday night, April 13, 2019. TCAN is a great place to see a show with the intimate feel of a near private concert and a sold out house of around 275 that helped make the night feel like a party. Davis opened with Tipping Point from their most recent album, 2018’s The Last Few Beautiful Days. She demonstrated right away that she still has her New Wave street cred along with a haunting voice that’s somewhere shy of Cindy Lauper, but definitely not Joan Jett.

The Motels line up has been at it for nearly 16 years including: Marty Jourard on keys and sax – the longest running band member covering four decades, Clint Walsh on guitar, Nicholas Johns on bass (and producer of their last album), and newest band member, Adam Wade, on drums.

With Mission of Mercy from their 1982 album, All For One, Davis established that with her driving guitar she can rock it out. The show was a tight 90 minutes with 22 songs ranging from the 40 year old, short but sweet Atomic Cafe from their self titled album, to selections from 2018’s The Last Few Beautiful Days. About a third of the way through, we hit their big hit from 1983’s Little Robbers, a song that Davis admitted she still doesn’t really know what it is about: Suddenly Last Summer.

The Motels got their first of several standing ovations after reaching back to 1979 with Davis singing of how “I would sell me soul for – Total Control.” She talked of being glad to have gotten a chance to record the new-ish If Not Now Then When, a song she had hanging around in the closet that she finally got a chance to bring out and let breath. The shows final song was the 1982 classic, Only The Lonely, from All For One. For an encore, we got an almost Pet Sounds like rendition of the title track from last year’s Last Few Beautiful Day. Thank you, Martha Davis and the Motels, for a great night.

From earlier this year:

If Not Now, Then When