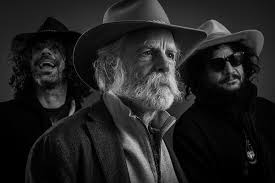 Taped by Scott Medeiros and Toni Fishman. This is a whole show recording, use the arrows to toggle from one song to the next.

The second night of the 2019 Wolf Brothers tour came to the not oft visited Northampton (for Dead related acts anyway) at a venue that in the decades that I have lived in western MA has never hosted a show that crossed my radar. The trio features Grateful Dead rhythm guitarist Bob Weir backed up by legendary producer Don Was on upright bass, and drummer Jay Lane from Ratdog, Furthur, Primus, and many other great bands.

The two set show opened with the Dead classic opener Hell in a Bucket. It is clear from the get go that this band is a solo vehicle for Weir, a la Weir and Wasserman from thirty years ago. Less than a creative collective, Was and Lane are there to support the legendary guitarist and songwriter, which they do with aplomb.

The Merle Haggard classic Mama Tried came next and the show was off and running. This selection was a natural as it reflected the Cowboy material of the Grateful Dead while also foreshadowing the Americana material off of Weir’s latest solo effort, the 2016 release Blue Mountain. But it was the Bob Dylan classic Queen Jane Approximately that came before Blue Mountain’s first selection, Only a River. Was and Lane did a perfect job of supporting Weir, supplying tasteful rhythm section work allowing the audience to bask in the song writing, vocals and unique rhythm guitar work on display. One of the most surprising elements was Lane’s clear and harmonious vocal work- I’ve seen Lane play dozens of times now with the John Kadlecik Band and Golden Gate Wingmen and his turns on the vocal mic have been more on the wacky side- but on this night his vocal harmonies were sweet and dynamic.

Garcia classics Been All Around this World, and Friend of the Devil were enthusiastically received by the incredibly appreciative audience. Weir’s Shade of Grey from Heaven Help the Fool came next but it was the set closing duality of Lost Sailor into Saint of Circumstance that was really something I had hoped to get that night and I was very pleased with the performance.

A short set break was an excellent chance to hang out, and I caught up with friends from lots of scenes: the western MA music scene, the Wormtown crew, the Deadheads, and the Creek freaks were all out in full force. There was tie dye aplenty, and the crowd was appreciative and mellow, suiting the venue and the contemplative nature of the band.

The second set opened with an exploratory Tennessee Jed which I would not have easily predicted in this format but was pleasant. A sandwich of the Ratdog song Ashes and Glass which segued into the Jerry Garcia band classic Don’t Let Go (by Jesse Stone) back into Ashes and Glass was rollicking and the crowd was fully invested by this point. From this point onward the show was a long list of classics ripped one at a time with skill and emotion.

A word about Weir’s playing- his style is unique and the product of a most unusual story within the rock and roll mythology. His fame derived from being in one of the most legendary rock and roll bands of all time, the Grateful Dead- Weir’s history is well known. That band was thick with rhythm from twin drummers, one of the most melodic and boisterous bass players of all time in Phil Lesh, and the soaring melodies of Jerry Garcia’s lead guitar work, not to mention the numerous keyboard and piano players employed by the most famous jam band of all time. This lead to Weir’s rhythm guitar style to develop in a way that was unique to him and this band.

Seeping into empty spaces and occupying rhythmic and tonal territory is the hallmark of playing in a band that was as unpredictable as it was chaotic. The resultant rhythm guitar parts are replete with triads, inversions, unusual scratch lines and off kilter blues licks. When taken out of that context and put on display in a small ensemble that focused full attention on that playing illustrated just how unusual Weir’s guitar style is. There is nothing straight ahead about his guitar playing, countered by a very straight forward vocal delivery. Weir’s prowess in song writing is nothing short of spectacular, and his rich song book is as classic as any multi hit author in classic rock.

Lane and Was allow Weir to explore material in a way that no larger band could- shining a bright light on the particular eccentricities of this American treasure. The audience showered Weir with “We Love You” and “Bobby Ace!!” and all manner of adulation. After fifty years of entertaining this crowd, Weir has earned his place in rock history, in the rock hall of fame, and in the hearts and souls of his fans. On a cool winter’s night in Northampton MA Weir showed why he has earned that faith, and that he is willing to give it back with all his heart.