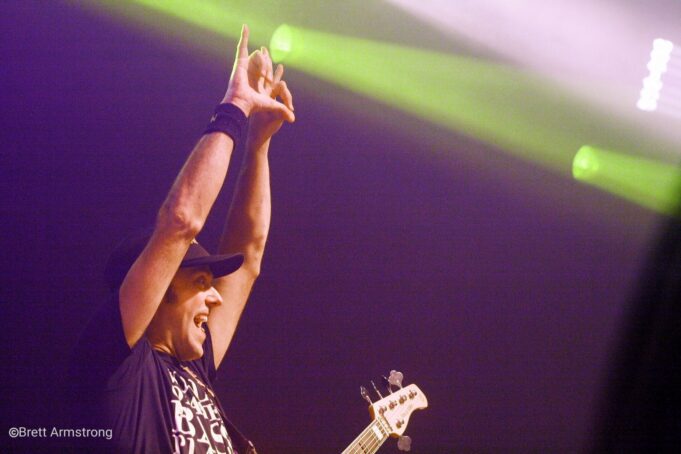 Words and Music by Brett Armstrong This is the first contribution from Brett!!

Making my way through last weeks nor’easter, with windshield wipers keeping time to a Santana CD, one question permeated my mind….. So what is this band UMPHREY’S MCGEE all about? I had come close to seeing the band several times, but the stars never aligned.

Well tonight I would get my chance. I was lucky enough to score a photo pass for the pit at my favorite local barn, the hilltop venue of Penns Peak above the mountain nestled town of Jim Thorpe, PA.

My friends and I arrived quite early and the first thing I noticed when entering the venue was the camaraderie of the early arrivals. They were bustling about, talking about what tunes they had heard on previous occassions, and more importantly, what tonight may have in store!

Some of them were passing around little round stickers with a mountain scene, and the words “Umph Love” printed along the riverside. They all handed the memento over with a huge grin and a gleam in there eye. Hmmm, maybe this band DOES have something special to offer?

The barn quickly filled and after a great set by the North Carolina based band, BIG SOMETHING, and after a brief intermission, the lights dropped, and with a roar from the crowd, the smiling members of UMPHREY’S MCGEE took the stage.

The music itself, was for me, mind bending. I was there to take photographs mostly, and to get a taste of what this band was all about. But at moments, I couldn’t help myself from dropping my camera, and letting the music in. The craftsmanship, precision and and passion these guys put into their music was apparent, taking shape around the band members interactions with themselves and the crowd.

The seamless, what I personally would call “power blues”, went in all directions, timings, structures, and yet returned to a central groove, much to the delight of the well seasoned UM fans. When a new song began, a new roar of recognition would erupt to the wooden beams overhead, with the band members smiling their approval.

I turned around to face the crowd a few times and got a couple shots of the “rail riders”. These are the fans standing closest to the stage against the metal barrier, and are always among the most devout members of any fanbase.

They arrive early, to be first in line, to enter quickly and race to the rail, to secure their unimpeded experience. The bliss on their faces as they sang along with their favorite tunes, told me a little more about the mystique that surrounds this band and the nature of ” Umph Love”.

I would like to send a shout out to my fellow pit photographer Sean, who was gracious and professional as we dodged around each other from side to side in the narrow confines. As the music ended, the pure joy this band provides was palpable, as the exiting fans shrieked and howled their approval of what was experienced.

So did I get my answer? What is UMPHREY’S MCGEE all about? Well, like anything worth discovering, I will have to be satisfied for tonight with getting a glimpse into all they have to offer. One thing is for sure. I certainly did feel the “Umph Love”.

Whole show audio, just use the arrows to toggle between songs.
Taped by opsopcopolis and found on archive.org