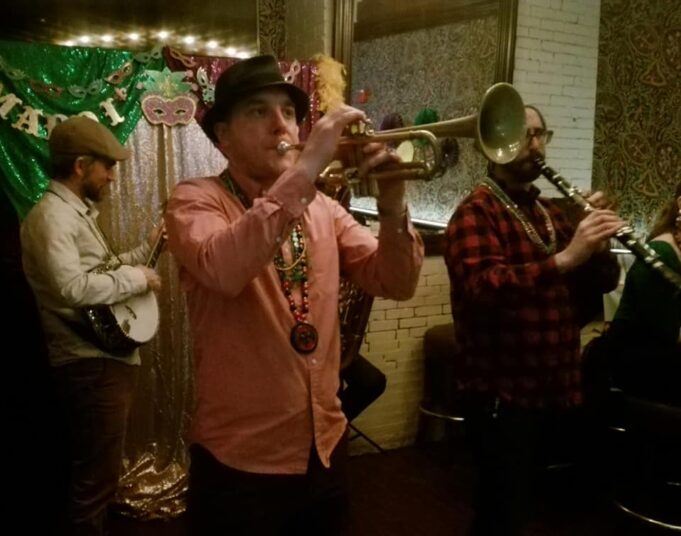 Sam Dechenne has got to be the most hard-workin’-est of all in a hard-working bunch of the many musicians around town. He only admits to having three or so active bands going at a time, but there are always some hot irons in the Boston fire. Sam keeps them all busy. He himself is so much the busier, of course, as he is his own main proponent and promoter and a force of nature acting in the interests of local music. If he doesn’t actually have at least six active irons in the fire, you can bet he is working as hard as the average mortal would with half that many, or three- and harder than most with one.

This particular evening, Fat Tuesday 2019, Dechenne’s Late Risers are doing a couple hours stint at Dillon’s on Boylston Street. He and a few of his countless compatriots have been engaged in an “annual residency” as it were, here at Dillon’s Mardi Gras party. Sam’s amazing abilities with brass music and his brassy personality are just what the Doctor (John) ordered for a full-flavored blast of New Orleans-style music. Whether it’s old-school or his own take on something classic, or a composition of his own, it’s all bayou-able music.

The four Late Risers came along fairly close to start-time, with naught but a few minutes to spare. They kicked around the question of whether to grab some chow right quick, and I heard Sammy say, “yeah, sure- we don’t start till seven.” This was at, like, a quarter ’til. A little bit of bustling and a bunch of quick bites later, we hear some sweet sounds coming from the corner. The big, bold brightness of trumpet and tuba, together with cool clarinet and banjo as background, signals the start of a festivus evening in the Back Bay. Sam puts his horn to his lips and they all jump into playing “When the Saints Come Marching In.” Is that a perfect way to kick off a Mardi-Gras party, or what?

And I am reminded: no circuitry! Even closer than bluegrass to all-organic (as in un-amplified) music, there’s really no set-up, no mics & cords, no plugs & jacks to put in place (or trip over)… even the vocals are wholly human work.

Sam and Tev, his front-line brother-in-arms, sing some verses between all the musical motion and the antic debauchery, but there’s more to it than that. They are cheerleaders, too. They hoot and holler and grin a whole lot, and they lead the audience in a round of refrains. And then another. And that’s just the beginning. This chorus of choruses amid the phenomenon of cheerful camaraderie repeats a good many times during the next couple of hours. They put a lot into their performance, intentionally engaging the audience- as with any of Sam’s endeavors.

This little ‘sub-bar’ a few steps down from Dillon’s dining room is pretty packed. If the capacity is a hundred bodies, then there probably one-oh-one in here. After a while, the foursome goes mobile. The band-leader takes ’em out on one of his trademark Sammy-Struts, parading around the place (quite literally) and carrying the whole shebang up the stairs and around the dining room. This is ‘trademark’ inasmuch as Doctor Dechenne does this dance around the house, in one form or another, pretty much any time he appears with any of his band projects. This shows yet another advantage of tech-free sonics; the guys aren’t anchored down to any single spot.

Another thing one can’t help but notice about the music of Sam Dechenne, with all its many mannerisms, is that it is always a hit. Wherever he does his deed, people dig it- and this isn’t regular radio-rock, mind you; most of the scholarly musicoligist’s output is off the beaten path. Diverse ethnic music, much of it Mediterranean and Middle-Eastern, is offered for public consumption, to the delight of those present. I gar-un-dam-tee-ya most folks in the joint don’t know a Tourssaint from a Rebennack, but they all get wiggy widdit anyway. There is dancing in the aisle- not a whole lot of room for it, but folks are enthusiastic. This is another natural effect of the way Sam Dechenne does what he does, with personality, and lots and LOTS of character and joy.

Again: this is not just a New Orleans -related matter. This is how and who Sam Dechenne is, right down to his Saintly Marching soul. Don’t make no never-mind who his current company might be, Sam pulls it out of ’em- and by “em” we mean ALL of ’em: his play-mates, his audients, and every damn one of the servers, staff, barkeeps, and kitchen crew too. I’m serious. Come to any of his shows, you’ll see.

As soon as I started home I slipped the secondary focus of the event, the new Late Risers release, into the car player. I found myself delighted. This is some mighty fun music. It was no chore at all to let the disc spin repeatedly all the way home. The material will fit right in with a wide variety of jazz programming, but it really called to mind the roaring twenties.

The uncomplicated instrumentation is stimulating without distracting from itself- everything fits and it all flows smoothly, and all this is enhanced by the clean, pure mix. The banjo and/or uke are allowed to come out distinctly and consistently, perhaps more so than in the highly variable live dynamic; this makes for a satisfying listen. A normally non-genre listener can be hard to please. To delight and even satisfy such a one is no small task, and Pocket Jazz Band is not the first product of Sam Dechenne’s efforts to accomplish this.

The bonus treat comes when the vocals come in. This voice has made a few appearances in other recordings, and it has always been adequate to the task and not at all egregious. But this singing is downright… well, delightful.