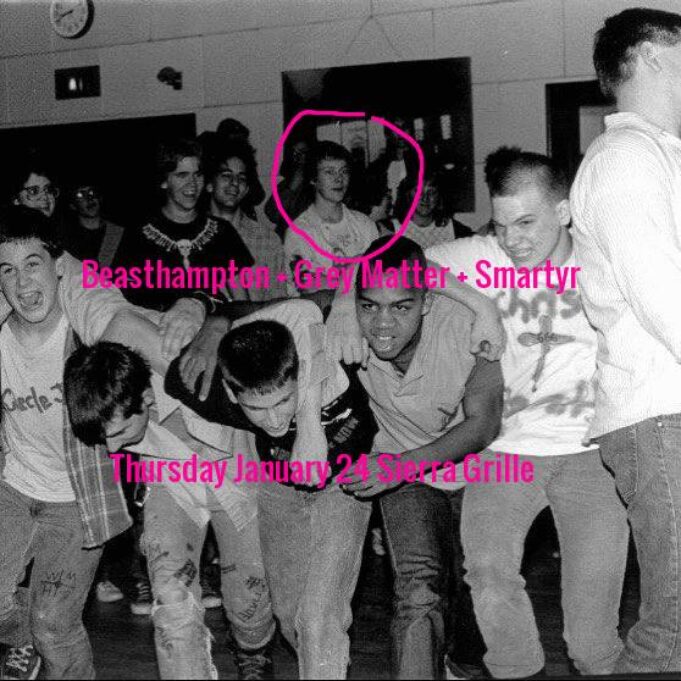 Eric Gaffney is kind of a “legendary” name on the Northampton music scene if you’re given to using such hyperbolic terms! Back in ’93, Billboard Magazine ran a front cover story on the “Northampton Music Scene” touting it as the “next Seattle” or some such prattle! Eric was probably one of the players that brought that attention due to his role in forming Sebadoh with Lou Barlow after the latter departed from his founding role in Dinosaur Jr. Although I worked in the center of this scene at Dynamite Records in Thorne’s Market from ’86 to ’05, I was blissfully unaware of the impact of Dinosaur until around 1990, but soon became a fan of the rock trio who, to this day, can out-metal or out-noise any band on the planet! Lou Barlow [bass] formed Sebadoh as a side, and then main project in the late 80’s, originally as a more mellow accoustic endeavor, and later, with the addition of bassist Jason Lowenstein, a rockier unit. At some point Gaffney split said group and has since worked solo.

So, though I managed to see Dinosaur several times, I never caught Sebadoh, nor had i ever heard Gaffney. But let me digress! My night started with my own gig, playing blues guitar with my friends Steve “Junior” Toutant and Tom Filliault at the blues ‘open mic” down in Southampton at JP’s Steakhouse. Not much of crowd on this wintry freeze night, but with the redoubtable Billy Klock on drums, Dan Margolis on guitar, and a good harmonica cat, we chased away the blues nicely for a few hours! After a quick burger break at Mickey D’s, I headed up to my old stomping grounds to check the Thursday night scene in “the Hamp.”

After parking on Pleasant, I went ’round the corner and ran into Al manning the door at an EDM event in Pearl St. If you’ve been to Pearl St. or any other IHEG venue in the past quarter Century or so, you’ve probably run into Al, who’s been “running things,” as they say in Jamaica, for IHEG [Iron Horse Productions] for a least a quarter Century. Whatever you’ve seen or heard there, he’s probably heard and seen many times and fixed the “this and that” that kept it all running over and over. Always good to see my old friend Al! As we were talking, Eric Suher came to the door with a problem for Al to solve in the back of the club! I’ve known Eric since he was managing the funk band, Who’s Kiddin’ Who!  Eric has been the target of a lot of criticism over the years, but really, if you’ve seen a show you liked at the Iron Horse, the Calvin, or Pearl St. in the last few decades, you can thank him, because all three venues would quite likely have been shuttered long ago without his stewardship!

After a quick hello, I’m off to the Bay State, oops, I mean the Sierra Grille!  I pay my $3 and head into Sierra to catch some “live” tunes.
On my way in, I’m greeted by O’Brian, Sierra’s creator, and chat with him  for a few! He’s generously brought back live music to the building through the “Re-animate the Bay State” Thursday night concert program, where you can catch several bands for usually about $3!

There’s no band on yet, so I head upstairs to Bishop’s Lounge to the best Reggae Jamdown in Western Mass! this would be courtesy of I-Ganic Sound  System, which is solely owned and operated by Camillo. Been friends with Cam since he used to buy vinyl at Dynamite in the 80’s, and at this point, he carries practically the entire history of the music either in his head or in the multiple 45 RPM record cases he lugs from gig to gig! I’ve long since sworn off the Red Stripe, but i always get a rush from a blast of the latest 45’s out of “the rock,” i.e.Jamaica!

Lucky for me, I get an invite to a private party in “the hills” for the next night, so I can hear this music TWO nights in row! Closest I’ll get to Sunsplash this year!  Just in the nick of time I remember the “live” scene downstairs, so I head back to Sierra just in time to catch the featured act of this article. It’s the aforementioned Eric Gaffney, playing a Stratocaster-like electric with a drummer and bass player!
It’s cool that the “Re-Animate” Series really recaptures the old Bay State ambience! It brings back memories of so many shows I saw and played here! The only difference is a new partition which makes it necessary for the band to play at a different angle than before. I saw bands like Morphine here and recorded a live CD with my band, The Equalites!

Anyway, Gaffney is totally rocking it out, which I didn’t expect! The tunes were fast, loud, and short, and the audience, myself included, was digging it! I wouldn’t know what the names of the songs were, but they exuded an authentic wave of punk, post-punk, or whatever the hell you want to call it! Rock n’ Roll…in the moment, on the moment! The last song I did recognize after a few turns. It was “Midnight Rambler,” the famous Stones tune! This version kinda brought back the feeling of dread I felt when I first listened to my new copy of “Let It Bleed” in my dorm room way back when! The Stones still play it, but the modern stadium version, though good, plays a little to close to script. This more chaotic version seemed more suitable to the scary intent of the original! “Smash down all your plate glass windows, put a fist through your steel plate door!” Yeah, “It’s only rock n’ roll, but I like it!”

A great night in “the Hamp,” just like old times! “Meet the new boss, same as the old boss!”