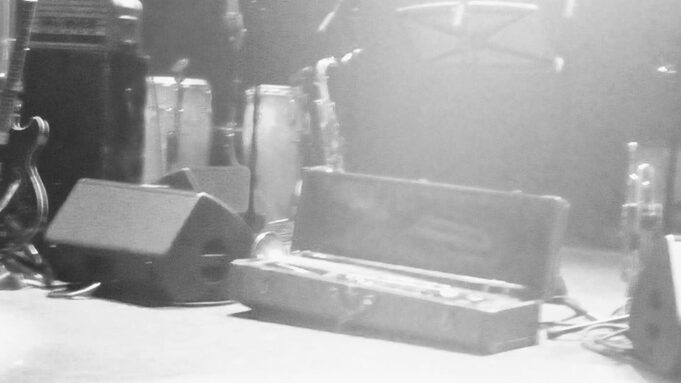 The missing man formation is an aerial salute performed as part of a flypast of aircraft at a funeral or memorial event, typically in memory of a fallen pilot. The formation flies over the ceremony low enough to be clearly seen and the second element leader abruptly pulls up out of the formation while the rest of the formation continues in level flight until all are out of sight.

So it was no surprise to see the first tribute to fallen member of Rustic Overtones, Dave Noyes- in the form of his trombone case open in the center of the stage, in front of the entire horn section. This show at AURA in Portland Maine has already been planned for some time, and it was a Herculean effort to be sure just to have Rustic Overtones keep this gig in light of the untimely passing of their band mate and friend.

For information on the April 3 Good Grief concert benefitting the family of Dave Noyes.

The night was a benefit already, raising money for Maine musician Tim Butterworth who suffered his own accident months ago, and money raised was to contribute to his medical improvement. There were several hundred people in attendance, a mix of his family and their friends and the extended Rustic Overtones family.

The show started with a set by Anna Lombard and a pickup band calling themselves Jef Leppard. Apropos for this night, the band had several horns along with guitars, bass, drums and vocals. They played mostly New Orleans and funk standards from Al Green to the Meters and Lombard came out for the final two songs. It was a fitting start to the night, celebratory and also respectful and focused.

After a short break the main event was to begin. The room grew dark and the screen behind the stage showed a short video with Dave Noyes at the piano, presumably writing horn parts. The video tribute wasn’t flashy or spectacular, just showing Noyes in his element, pulling together music, community and his mates all by himself, through his work with Rustic Overtones. Shy, resolved, focused, successful. After a few minutes they screen went dark, and big letters flashed up on the screen “Dave Noyes hated being on the Jumbotron!!!” And with that ice breaker, people were invited to let go, and to allow the celebration of Noyes’ life work commence- Rustic Overtones took the stage.

Gas on Skin opened the show and illustrated that the set list was going to be a journey reflecting more than two decades of music by Portland Maine’s favorite rock band. Loud, lush, and filled with energy the band began to erupt in music- a full six piece horn section center stage, book ended by two drum sets, bass, guitar, keys, percussion and at times guest vocalists and guest violin players.

The next two hours was a reflection, a celebration, a rock show, looking forward, remembering- crying, laughter, joy, sadness- all orchestrated and executed by one of the best and most underappreciated bands in New England rock history. Original members came and went and current members knit together this band that to my count had sixteen different members over the course of the night. One song after another tripped memories, inspiring a togetherness craved by audience and band members alike.

Contribute to the relief fund for Dave Noyes’ family here.

Throughout the night Noyes was lauded as the reason that they were all together, that he was the one who brought together the elements that created this unique band. Original keys man Spencer Albee returned and split time with Michael Taylor. It was the first time I had seen the band with Albee, who was on board for the first decade of the band’s existence. Taylor would contribute to percussion and backing vocals and even ripped a great guitar solo at one point.

Likewise current drummer Gary Gemmiti shared duties with original drummer Tony McNaboe- at times they’d play together, and other times one or the other. You got the feeling that everyone was coming together without ego whatsoever to celebrate this man, this band, and this amazing songbook. The band was firing on all cylinders, filled with emotion without sacrificing precision. The audience had their part, singing along at the top of their lungs, being pointed out individually by front man Dave Gutter to join the band from where they were standing so that the whole community could sing as one.

The show raced through classics like Rock Like War, Light at the End, Iron Boots, and Common Cold to newer material like Low. All the while, the entire show had video on the screen that showed a notebook filled with the grammer school work of Dave Noyes, slowly turning pages, occasionally interrupted by a cat needing attention. The schoolwork was all reports on the history of Maine and Portland, in Noyes’ neat hand writing- reflecting his love of the area and the special culture that is Maine.

The set ended and the band left the stage briefly but Lombard remained to talk about how important Rustic Overtones was to her and the community. She was soon joined by Dave Gutter who joined in that conversation and reminded everyone to contribute to Noyes’ family relief fund and to announce a show on April 3 at the State Theatre. The three song encore that followed brought us all together again, inspiring sweat and tears, joy and sadness. Feast or Famine, Love Underground and the show’s finale Combustible.

I am so glad that we made the trek up for this show. It’s been a few years since I had seen the band, and my love of the band came back to us in a rush. We were thrilled to be able to share in the community, to express our condolences while renewing our faith- both in the band and for a glimmer, our hope was renenewed in rock music, in community, in humanity. If we can take the feeling that was created that night and live it daily, Dave Noyes will be remembered forever. The night ended with the crowd chanting “Dave Noyes! Dave Noyes!” over and over again. I could not agree more.

Show Must Go On

You Should be Worshipped

Light at the End

For information on the April 3 Good Grief concert benefitting the family of Dave Noyes.

Contribute to the relief fund for Dave Noyes’ family here.