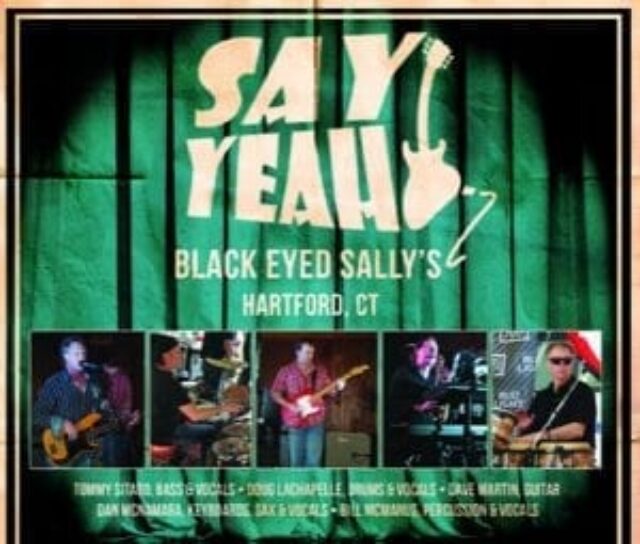 So, yeah… Say Yeah!  We h’ain’t been to Black-Eyed Sally’s since longer than the life-expectancy of an automobile owned by the aforementioned scribe, and back a month or two ago, the promise was made to make up for that night’s virtual gnome-theivery.  So here we are, for Say Yeah! at Black Eyed Sally’s in Hartford.

And yeah, it feels like a happnin’ scene here in Hartford.  I managed to quickly and cleverly plop my coat down at the one-and-only table that wasn’t chock full o’ butts & elbows, and then I went and asked if it was OK to take it.  And I got a menu.  Of course.  They got the ‘Q, and mighty good BBQ ’tis.  No Short Rib on the menu, but they haven’t run out of Burnt Ends on me yet.  Add a coupla sides to the app and call it a perfect dinner.  Adds up to ’bout the same price-wise, too.

Best quick genre-label-tag-name for this music would prolly be Par-tay.  It’s rock for sure, mostly whatcha call ‘classic rock,’ but think of it in terms of an alternate (not “alt” or flip-) side of that wide range.  Like, leaning toward the soulful side.  Average White Band, Dr. John, some Chicago.  Every bit of it is fully and affectingly dance-able, but it ain’t whatcha call “dance music.”  More to the FM side of funk, but full and effective while pulling out deep cuts, to boot.  Their song selection was no less familiar and lovable than the stuff we hear every day anyway, a whole lot more refreshing and interesting. The show was exciting too, judging by the bodies in motion all around the place.

The set included Clapton’s “Bad Love;” Buddy Holly’s “Well Alright” done the Santana (or Blind Faith) way.  And speaking of Carlos, what a great little Santana set they did, culminating in a great “Samba Pa Tee”.  These guys can do pretty much whatever they want- they have the chops.  Seriously, Say Yeah! is a band of professional brothers, and they have a grasp for what repertoire will work for the all-age dancing folks.

Here’s a short set list coming right out of my memory:
Ridin’ Thumb, Do It Again, Love Is Alive, Right Place Wrong Time, and then- dig this- Everyday People- Sly and the Family Stone!  Now, tell me… where have you heard that type of variety lately?  And 25 or 6 to 4, with a singer who actually pulls off a “gotta-look-twice” Peter Cetera…?  Spill the Wine, Livin’ for the City… and so on… some Allman Brothers Band, one song you hear often and one more rare.

Live Music News & Review was born out of a love of live music and the wish to chronicle the amazing shows happening around the country. Stories and reviews are born both from our editorial board and from readers just like you around the country.
Contact us: lmnandr@gmail.com
5,722FansLike
209FollowersFollow
296FollowersFollow
6SubscribersSubscribe

Hobo Flats at the Deck Bar