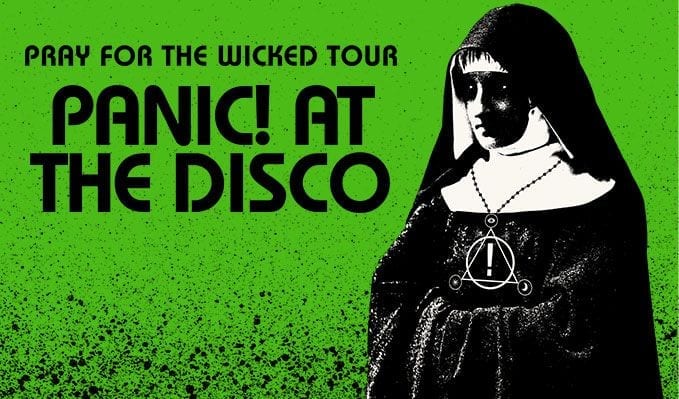 On Sunday the SNHU Arena paid host to one of the biggest pop rock bands to arise out of the last five years, Panic! at the Disco. The band has been at it for some fifteen years but have seen their stock ascend to major status in the last few albums, and a cold Sunday night in January did not deter a huge crowd from converging on the Arena for the show.

Up first was Betty Who – A good performer that falls somewhere on the scale between KllumaCaty Perry and P!nk. She played to backing tracks with two background dancers for six songs. Her style could be described as pop with an edge. She was pretty good and a nice opener to the show.

Two Feet was the next support band, and was comprised of a singer with a guitar and a drum machine / keyboard player. His set was more based around the music and less about the performance and dancers. The music had a bit of a darker feel, with tinges of the Gothic tones of Hozier. His set was around eight songs, and it wasn’t really a style of music that I appreciated as much, but he did well, and people liked the set. The whole arena was doing the flashlight phone maneuver at the end of his set to show their admiration.

And then… Panic! at the Disco took the stage. There was a big buildup including a countdown timer that signified the ten minutes leading up to the commencement of the show. Up from center stage came risers that house drums, the horn section, and the guitar and bass sections.
Then out of a smaller square on the stage, Brendon Urie, front man for Panic at the Disco- came flying out, literally- he leapt off of the escalating riser into the air. They launched into Silver Lining and the crowd went crazy.

Highlights of their roughly two hour set included all the hits like Say Amen, Death of a Bachelor, I Write Sins Not Tragedies, and more.

There was a bit of a fiasco in the middle of the set, during the cover of Bohemian Rhapsody. They were so good that the PA system blew! The band persisted through the technical challenge and the stage crew gave lead singer Brendon Urie a megaphone. He got the entire arena to quiet down so that they could hear as he proclaimed “We Broke the PA, We’ll be right back!!” So the band took a short break of about ten minutes while that was all sorted.

They came back hotter than ever. The show included a flying piano, lots of pyrotechnics and confetti and of course moving stage components. But the real special effect was Urie, whose command of his vocals and charismatic style shouted out to the world exactly why people love this band and his music.

There was no encore but Urie did a speech thanking his audience and expressing his amazement at how it has all built up over the fifteen years he’s been producing this music. His amazement was palpable, as he took in the large crowd out on a cold January night to share in his musical vision.

(Fuck A) Silver Lining
Don’t Threaten Me With a Good Time
Ready to Go (Get Me Out of My Mind)
Hey Look Ma, I Made It
LA Devotee
Hallelujah
Crazy=Genius
The Ballad of Mona Lisa
Nine in the Afternoon
One of the Drunks
Casual Affair
Vegas Lights
Dancing’s Not a Crime
This Is Gospel
Death of a Bachelor
I Can’t Make You Love Me (Bonnie Raitt cover)
Dying in LA
The Greatest Show (Pasek and Paul cover) (from “The Greatest Showman: Reimagined”)
Girls/Girls/Boys
King of the Clouds
High Hopes
Miss Jackson
Roaring 20s
Bohemian Rhapsody (Queen cover) (PA blew out in middle of the… more )
Emperor’s New Clothes
Say Amen (Saturday Night)
I Write Sins Not Tragedies
Victorious