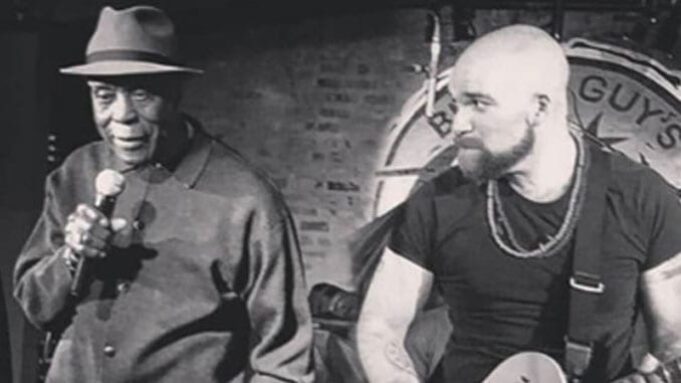 The blues world was shocked by the sudden and untimtely passing of Mike Ledbetter.

The Blues world lost one of its brightest lights today, Mike Ledbetter. Anyone who was witness to his soul-fired talent will agree, I’m sure.

The first time I saw him was at the Rum Boogie on Beale St., at a jam during BMA week, where he stepped up to the microphone and just tore the roof off the sucker! I thought, now who the hell is that guy? He can SING!

That voice of his – the otherworldly falsetto – gave me hope for the Blues. Something exquisitely beautiful to balance out all the guitars and harmonicas that tend to grab the spotlight. Someone who could build on the legacy of past greats like Otis Rush, and take it somewhere new and shining.

The last time I saw him was in Plattsburgh, NY, when he and Mike Welch were gracious enough to let me sit in with them for a couple songs. After the gig, back at Laura Carbone’s house, I remember chatting with Mike Ledbetter in the kitchen – about him being a dad and a touring musician, and trying to balance it all. And I just felt such a ‘realness’ from him. Tired, but present. Kind and thoughtful. A family man. And a man who felt the fire of singing the blues, and needed to share it with the world.

Thank you Mike for all you gave us, most especially hope. Hope does not die with you. It has wings, brother. Sending you love. Rest in peace.

Ledbetter was raised in the Chicago area (Elgin, IL) and was a formally trained operatic singer who found his way to the blues after a decade of singing opera. He became well known as an unusually powerful voice in a genre known for evocative singing and guitar playing. He was only thirty three years old.

Live Music News & Review was born out of a love of live music and the wish to chronicle the amazing shows happening around the country. Stories and reviews are born both from our editorial board and from readers just like you around the country.
Contact us: [email protected]mail.com