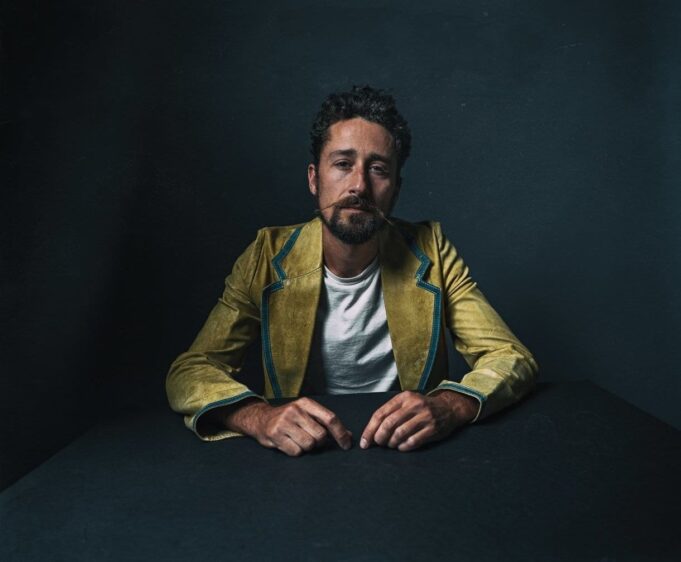 Steve Berlin Produced album is a departure from the solo one person band approach, embracing outside influence to peel his sound apart and reconstruct it into a powerfully direct work.

New York, NY (January 22, 2019) – The latest album from The Suitcase Junket, Mean Dog, Trampoline is populated by characters in various states of reverie: leaning on jukeboxes, loitering on dance floors, lying on the bottoms of empty swimming pools in the sun. Despite being deeply attuned to the chaos of the world, singer/songwriter/ multi-instrumentalist Matt Lorenz imbues those moments with joyful wonder, an endless infatuation with life’s most subtle mysteries. And as its songs alight on everything from Joan Jett to moonshine to runaway kites, Mean Dog, Trampoline makes an undeniable case for infinite curiosity as a potent antidote to jadedness and despair.

The Suitcase Junket will release Mean Dog, Trampoline on April 5 via Signature Sounds and today shares the video for “Dandelion Crown”. The track instils a warm empathy into its loving and nuanced portrait of addiction and the video duplicates Lorenz into his own bandmates; echoing his live performance life in a new light.

“The song came from thinking about how you can lose control of your life by degrees, until you don’t even recognize yourself anymore,” says Lorenz. “But there’s still a little redemption in there—those moments when things become sweet and clear again, despite the fact that you’re permanently changed as a person.”

Throughout Mean Dog, Trampoline, The Suitcase Junket explores everyday dangers of all kinds, infusing each track with his idiosyncratic storytelling and effusive vocal presence. With its restless melodies and tender intensity, the album-opening “High Beams” offers an up-close look at an unsteady romance (She was pacing like a raging bull /With a heart half full of hurt, half full of doubting/And like everything I thought I had/It turned half bad before I got to think about it).

A more playful reflection on romantic confusion, “Everything I Like” conjures a happily punch-drunk mood from its bouncy groove and Billy Joel references. “It’s about a relationship where you can’t quite understand each other but sometimes there’s a little clarity—like when a song you both love comes on the radio and all of a sudden it’s like, ‘Oh, we know what to do now,’” says Lorenz.

With its name nodding to Lorenz’s longtime love of collecting old suitcases (including an antique that he’s refurbished into a bass drum) and to a secondary definition of junket (i.e., “a pleasure excursion”), The Suitcase Junket reveals all the warmth and wildness to be found within such limitation. Not only proof of his ingenuity as a songmaker, that improbable richness is ineffably bound to Lorenz’s purposeful fascination—an element he alludes to in discussing one of his most beloved tracks on Mean Dog, Trampoline, the gloriously clattering “Stay Too Long”.

“I’m the kind of person who wants to stay around till the very end of whatever’s happening,” Lorenz says of the song’s inspiration. “Whether it’s a party or something else, I always want to know how it ends. Even if it’s probably gonna be a total disaster, I want to be there to see it all.”

The Suitcase Junket is currently on tour in the UK, hitting Folk Alliance in Montreal next month, followed by a national tour to support the album. A full list of tour dates can be found below with more to be added.