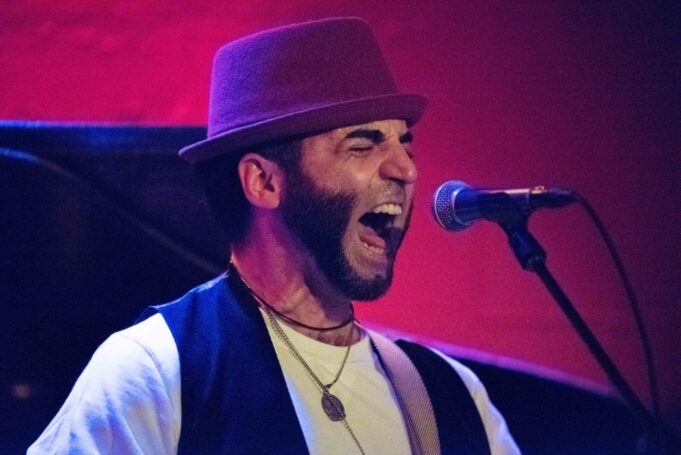 Having released their first full-length album and a follow up EP within one year of each other, self-proclaimed NYC Blues-Punk-Rock outfit, Johnny & the Bootlegs, took the stage of Rockwood Music Hall with an extended lineup this past Thursday night. Having originated as a beer drinking, good time, power trio, the group was formed by NYC singer-songwriter John Santiago, and has since expanded to include Dylan Defeo on keyboards, Seaton Hancock on saxophone (A NY Blues Hall of Famer) and a guitar feature with Cancion Franklin amongst many other NYC guitarists over recent months.

The set included tracks from both their self-titled debut album, as well as the well received follow up EP entitled, NYC Rags, both of which are available to hear on major digital streaming platforms (Spotify, iTunes, Apple Music, Google Play, etc…). In addition, the group covered “Lonely Boy” by the Black Keys as well as an ever so Rockwood appropriate rendition of the classic Ray Charles song, “Hard Times.”  The set began uptempo and strong, calmed down mid-way for their more touching songs, and then elevated to high levels of their punk rock side, ending the night with their well known and anthemic, “NYC Woman.”

With a true gritty, soulful rock ‘n’roll scene in New York being overrun by Indie rock in the recent decades,  Johnny & the Bootlegs were a refreshing change of sound on the Rockwood stage. Santiago mixes up his singing with screams and yells all the while  throwing old school blues licks between riffs held down by Erik Neuberger on  bass (often times with much fuzz involved). The recent addition of Brad Geyer on drums allows for a fresh perspective of punk sensibility in the rhythm  section and Hancock absolutely wailed on the Saxophone at any given moment.

Defeo’s ability to switch between the piano and his organ rig was unparalleled and smooth, creating a diverse sound for songs that generally flow through genres seamlessly. Longtime friend and NYC guitarist, Cancion Franklin came up for two tunes, chugging along with the group and shining on some serious guitar solos for each, one of which is a new and yet to be recorded J&tB song entitled, “Dance For Me”, which Santiagoun ashamedly admitted was “about his love and respect for NYC strippers.”  He oddly spoke similarly at the start of “NYC Woman,” discussing the cities ability to “breed and foster the strongest and most independent women in the world.”

Johnny & the Bootlegs rocked Rockwood Music Hall. They seem like they’re always having a good time while also expressing some serious feelings at certain moments and then being restful at others. It’s a show that requires attention and commands energy from the room, which on this night was packed and pleased.

Check them out online at www.JohnnyandtheBootlegs.comstreaming on Spotify, iTunes, Google, Amazon and/or at their next live show which will be…..

This is our first review with words by Chuck Willis, and we are so happy and proud to host the images created by Mark Ashe Photography.