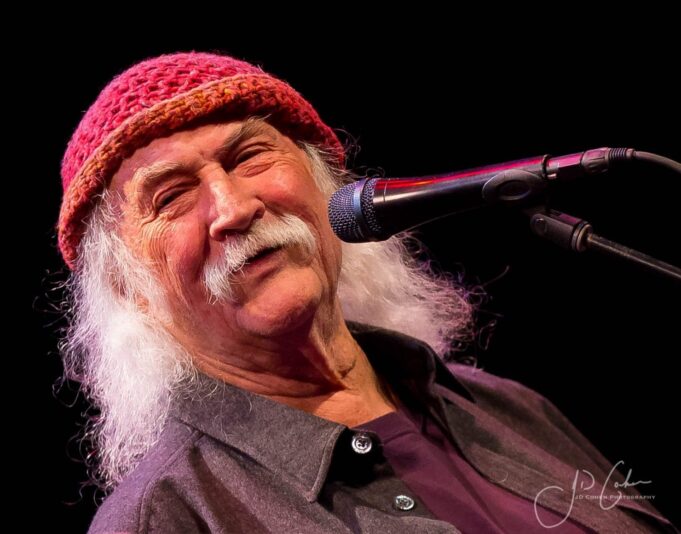 David Crosby: Still Crazy after all these Years

Sometimes it’s better not to know too much about your favorite musicians. David Crosby is one of those difficult personalities that, although tremendously gifted, has a reputation of being kind of a jerk. This might not matter much to anyone going to one of his shows unless you are an autograph seeker or approach him off stage or at a VIP experience. In addition to picking fights with other musicians, most of Crosby’s former band mates don’t want to have anything to do with him, which is unfortunate since he has been part of several Hall of Fame bands and contributed to five albums included in Rolling Stone’s 500 Greatest Albums of All Time.

The last time I saw David Crosby was in 1983 at the Channel Nightclub in Boston. At the time, he was waiting to serve a jail sentence related 1982 gun and drug charges. Crosby took the stage several hours late for a small group of dedicated fans and curiosity seekers. It wasn’t Crosby’s finest hour, and I was certain I would never see him perform live or alive again. But in addition to being a difficult and gifted artist, David Crosby is a survivor. He has survived liver failure, heart attacks, a motorcycle accident, alcoholism, drug addiction, poverty, and more. And when Croz took the stage promptly as scheduled last Friday night at the Zeiterion Theatre in New Bedford, it was clear from the minute he took the stage, this was a renewed and invigorated David Crosby.

The New Bedford date was the second to last stop on his twenty two show, five week tour in support of his recently released, “Here if You Listen” album. The new album released in October is Crosby’s fourth solo album since 2014 and is very much a collaborative effort with Michael League of the band Snarky Puppy and Michelle Willis and Becca Stevens, now known as “Lighthouse.”

A full gallery of photos from this show by JD Cohen is available here.

With Lighthouse, Crosby recaptures some of the beautiful harmonies that made him a folk rock hero in the late 60’s and early 70’s. The pristine sound of the Zeiterion Theater and the attentive audience made for a perfect pairing on Friday night as Crosby performed new material, (“Glory”, “Vagrants of Venice”, “Other Half Rule”) and classics like “Guinevere,” “Déjà vu,” and “Woodstock.”

Now 77 years old, Crosby’s sweet voice somehow remains strong and in great shape, and his harmonizing with Lighthouse on both the older and new songs worked to perfection at the Zeiterion.  Although the new material is good, the truly transcendent moments came when Crosby dipped into his old catalog, and even though the set list remained pretty much the same throughout the tour, it all seemed fresh and spirited.

As expected, the show was infused with some wonderful stories and enough political commentary to please the many old hippies in attendance. Given the current political environment, the political songs and commentary were all relevant. The show ended with a rousing version of “Ohio” that had everyone in the house up on their feet and singing.

It’s hard to reconcile the good vibes and beautiful music coming off the stage with some of Crosby’s off stage behavior and the more negative experiences fans and other musicians have had with the artist. I guess it’s just another reminder to never confuse the artist with the art. To quote Kanye West who Crosby famously criticized, “name one genius who ain’t crazy.”

Things We Do for Love

What Are Their Names

By the Light of Common Day

Look in Their Eyes

A full gallery of photos from this show by JD Cohen is available here.