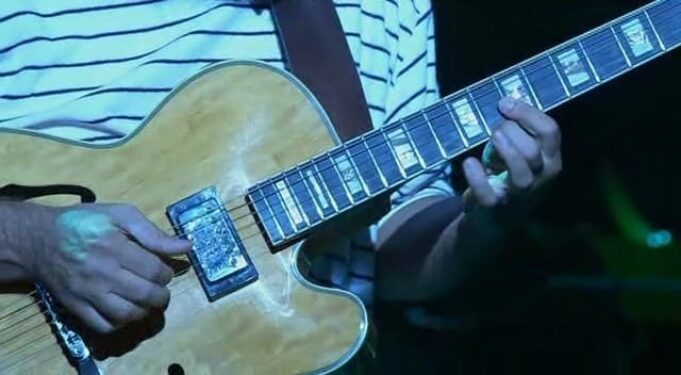 From the video channel of Armonie d’Arte Festival 2018:

As I parked my car in the pay lot in downtown Portland, Maine, I recalled my sister going on and on about how amazing Pat Metheny was to see live. I was pumped for this show having never experienced it myself. I walked over to the pay meter to see an older gentleman who was struggling to use the meter and offered to assist him. After he was done, I got my own pay pass and put it on the dashboard, then put my camera gear and notepad in my bag, and locked up and walked over to the theatre. As I got there, the older gentleman was just catching up to me and he thanked me again for helping him out. He told me that he had been to see Pat play over thirty times since the late 1970s. It started when he and his late wife would go, and this was the first show since her passing. I made my way inside, and after a quick pit stop at the ladies room (it was a long drive up there after all), I headed to my seat. As I settled in, a couple made their way over to sit next to me. We chatted a bit, and they said that they had been there to see the comedian, Bob Marley, recently. The lights dimmed and came back up and a disembodied voice announced that the show would be starting in just a few moments. Pat walked out onto the stage to thunderous applause, and his guitar tech came running out with his custom Manzer Pikasso guitar. I had remembered seeing it on display at the Museum of Fine Arts in Boston some seventeen years ago in the Art of the Guitar exhibit. The following is an excerpt of a writeup done by Roger Catlin, Courant Rock Critic about the instrument.

“Instruments Go Solo At Museum Exhibit In Boston January 26, 2001| By ROGER CATLIN; Couran Rock Critic The three-necked, two-holed, 42-string Pikassomodel was made for jazz guitarist Pat Metheny, who asked Linda Manzer to make a guitar with as many strings as possible. Besides marveling at its unique shape, museum-goers can sample a musical work Metheny played on it.” He opened the show playing a beautiful interlude on the Pikasso, that flowed into the upbeat ‘Son of Thirteen’, from his 2008 release, Day Trip. It was then that he quickly switched to another custom Manzer guitar, this time a hollow body jazz guitar and was joined on stage by the other three members of his quartet. I watched in awe as Pat’s fingers moved effortlessly over the frets, becoming one with his instrument. I was completely blown away. I knew of his prowess on the guitar, but had not known of the other three members of his quartet until tonight. These were astoundingly talented musicians, and I’d like to give some background on them and their accomplishments before I continue on with my review of the show. GWILYM SIMCOCK ON PIANO: (EXCERPT FROM GWILYMSIMCOCK.COM); Gwilym’s influences are wide ranging, from jazz legends including Keith Jarrett, Chick Corea, Jaco Pastorius and Pat Metheny, to classical composers including Maurice Ravel, Henri Dutilleux, Béla Bartók and Mark-Anthony Turnage.

Although principally a jazz artist, Gwilym has composed numerous works for larger Classical ensemble that combine through-composed elements with improvisation, creating a sound that is distinctive and very much his own. In the last few years, Gwilym has become renowned for his solo performances, releasing a critically acclaimed album ‘Good Days at Schloss Elmau’ in 2011 and touring throughout Europe and to places as far afield as Australia, the USA, Canada, Korea and China to name but a few. Gwilym has toured extensively with the cream of British and international jazz artists including Dave Holland, Kenny Wheeler, Lee Konitz, Bill Bruford’s Earthworks, Bob Mintzer and Bobby McFerrin. He co-leads the Anglo-American Supergroup ‘The Impossible Gentlemen’ with British Guitar legend Mike Walker, Steve Rodby and Adam Nussbaum. From  BBC RADIO 6 MUSIC: https://youtu.be/w2Q9nQg4JmM LINDA MAY HAN OH ON UPRIGHT BASS: (EXCERPT FROM LINDAMAYHANOH.COM); Linda completed her Masters at the Manhattan School of Music in 2008 studying with Jay Anderson, John Riley, Phil Markowitz, Dave Liebman and Rodney Jones. She now teaches the precollege division there and is involved in jazz videoconference master-classes for high-schools around the US. As an active teacher she was also involved in creating a series of lessons for the up and coming BassGuru app for iPad and iPhone. Linda has performed with the musicians such as Joe Lovano, Steve Wilson, Vijay Iyer, Dave Douglas, Kenny Barron, Geri Allen, Fabian Almazan, and Terri Lyne Carrington. She is currently the bassist with guitarist, Pat Metheny. Linda is an active double bassist, electric bassist and composer, composing music for various ensembles and short films, also participating in the BMI Film Composers Workshop and Sundance Labs at Skywalker Ranch. Linda composed for Sabrina McCormick’s short film “A Good Egg” which was featured in the New York Shorts Festival. LINDA OH (BASS) PERFORMS “BLAME IT ON MY YOUTH” – CAPSULOCITY ANTONIO SANCHEZ ON PERCUSSION: (EXCERPT FROM ANTONIOSANCHEZ.NET); Antonio Sánchez began playing the drums at age five and performed professionally in his early teens. Antonio pursued a degree in classical piano at the National Conservatory in Mexico and in 1993 moved to Boston where he enrolled at Berklee College of Music and New England Conservatory, where he graduated Magna Cum Laude in Jazz Studies. Since relocating to New York City in 1999, Antonio has become one of the most sought-after drummers in the international jazz scene. His playing is featured in over a hundred albums, and he has been the drummer of choice for 20-time Grammy winner Pat Metheny and has been part of virtually every project the famed guitarist has created since 2000. And is also a five-time Grammy award winner, including ‘Best Original Score’ for Birdman.

I was happy to just sit and absorb the magnificence that is a Pat Metheny Group performance. My jaw had dropped at the beginning and I don’t think I bothered to close it through the whole show. One thing that I found very refreshing was that there wasn’t a singular focus in the group. While his band is called ‘The Pat Metheny Group’, they are such a cohesive unit that you feel as if each individual piece makes up a part of the greater whole, all the while highlighting the incredible talents of each member, giving you a show of pure, unadulterated soul-feeding music. He played a lot of his older material, like “Farmer’s Trust,” “Better Days Ahead,” and one of my own personal favorites, “Phase Dance.” He also played some of his newer material, like “Question and Answer,” that had a distinct “Take Five” Dave Brubeck feel to it, and “The Red One.” About halfway through his set, he stopped to take a rare step up to the microphone to thank everyone for coming out, and to introduce the members of the band. You could tell how much he admired his fellow musicians, because as they took their individual improvs, he could be seen, eyes closed, smiling widely, his head bobbing in time to the music, immersed in what he was hearing.

During the show, each musician played a wonderful duet with Pat, starting with Linda, and ending with Antonio. Antonio’s number stood out for me because he played something very similar to the Max Roach ‘The Drum Also Waltzes’ technique of playing a sub-beat on the bass drum and hi-hat, while soloing over it. They finished out the incredible night of improvisational jazz with two encores, starting with a medley of songs that included Is This America, a beautiful acoustic classical jazz piece, and ended with Song for Bilbao from his 1983 Live album, Travels. If you have a chance to catch this tour, I highly recommend it. You will be in for an astounding night of musical genius.