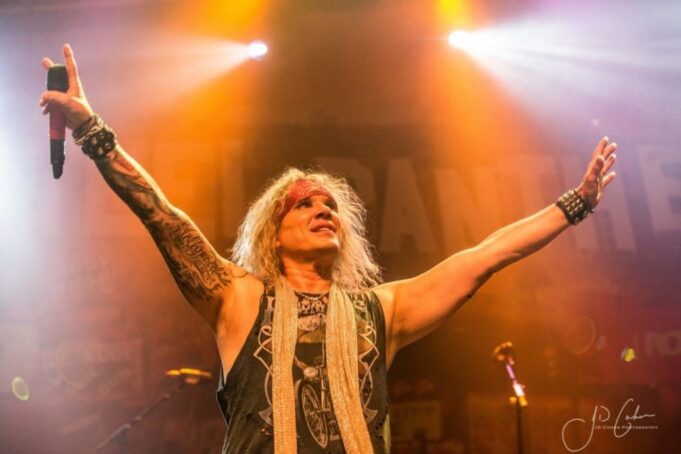 From the video channel of BstMstr Was Here

Eighties metal and classic rock are alive and well; if last Thursday night at the House of Blues is any evidence.  Two bands with very different approaches performed old school rock n’ roll with ferocity and fun. As part of the 2018 Sun Set Strip Tour, Steel Panther and local heroes, Bad Marriage, performed to a full house with an enthusiastic audience who came to celebrate the music and good times of a not so innocent age.

It can be hard to reconcile the raunchy rock n’ roll lampoon metal of Steel Panther in today’s ͞Me Too era where language and behavior that offend sensibilities should be restrained or eliminated completely. If you have never seen a Steel Panther show you might be taken aback at first by the adult content and adolescent humor. However, once you figure out what these guys are up to it’s hard not to enjoy their Spinal Tap approach to 80s Metal, their tongue in cheek humor, catchy songs, talent and energy.

Thursday’s show started out like a stand-up comedy routine that left some in attendance wondering if much music would be played at all. Guitarist Satchel launched into a long rant about his love for all things Boston, where his family now lives. He left no time in getting right into the dirty humor making jokes about some of the women in the front row and the bands off stage sexual conduct.

Once the music started in earnest it was clear there is more to Steel Panther than a vaudeville routine. Michael Starr is a talented front man with an impressive vocal range. His parody of Ozzy Osborne was hilariously right on target; while Starr is more Diamond Dave than the Prince of Darkness. Regardless of the ridiculously silly lyrics and the shtick, Steel Panther songs are incredibly catchy and able to stand on their own next to any of the Metal classics they cover.

Goin’ in the Back Door, Eyes of a Panther and Death to All but Metal stand out as some of the bands best and even outshined spot on covers by Van Halen, Bon Jovi and Def Leppard. Through the night there were plenty of call to ͞show us your t*ts͟ but the band showed some class and true nature at the end of the show when inviting the ladies in the audience to come up on stage. As the stage filled with young females dancing and gyrating to the music it looked like things were going to get wild but Starr never let things get X rated and even showed moments of real tenderness and restraint handling the crowd of wild women on stage.

Bad Marriage played a blistering 45-minute set of classic rocks. Appearance wise, this band looks like they stepped out of era of 80’s Steven Tyler, Slash or the LA Guns closet, sporting stylish classic rock apparel. Bad Marriage has the look down and they backed it up with an incredible, explosive performance.

A late addition to Thursday nigh’ts bill, the band gave it everything they had. Cut from the very same cloth as some of the greatest rock bands that have ever graced a stage, Bad Marriage is destined for glory. Bad Marriage has a big and bold sound that fit perfectly into the opening slot for Steel Panther, but the truth is this band should be all over the radio and playing BIG venues.

Without trying to mimic any of his idols, Jon Paquin is the consummate lead singer with a great voice, vocal range and charisma. Mike Fitz on lead guitar plays big, fat chunky riffs right out of the AC/DC playbook and knows how to balance technique and raw guitar power. Guitarist Ian Haggerty is a perfect foil to Fitz building a furious rock n’ roll attitude and energy as the show progresses. Michael Delaney (Drums) and Todd Boisvert (Bass) keep the train rolling with plenty of bottom end and perfect timing. Everything about the band is direct and commanding. Original songs like Nay Sayin Blues, Long Way Down, Ms. Outrageous and the new Honey Bee are instant classics, pack a punch live and have huge radio  potential.

Thursday’s set at the House of Blues was tight and energetic from start to finish. The only thing missing was a crowd that knew all their lyrics and could sing along. Let’s hope there are good things in store for Bad Marriage. They deserve all the success that comes their way.