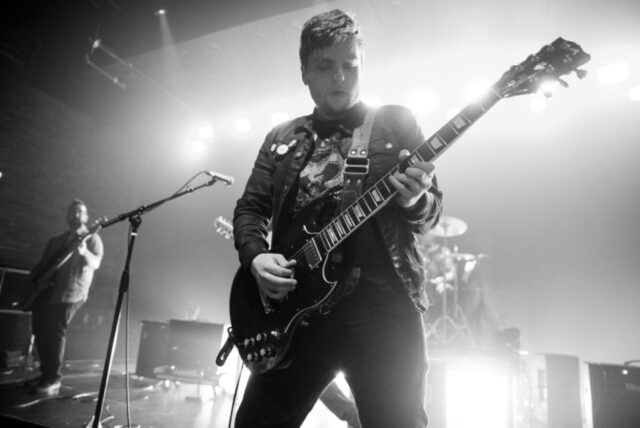 Rock Ain’t Dead Yet Part II   In my last review of Bobby Mahoney and the Seventh Son’s self-titled album, you may remember that I was raving about the bands live performance and album.  Let me tell you it was no fluke. Bobby Mahoney and the Seventh Son are the real deal!  The band was headlining House of Independents in Asbury Park, New Jersey. House of Independents holds about 500 people, the show wasn’t a sellout, but it was pretty close.

Bobby Mahoney and the Seventh Son played for about 90 minutes performing 14 songs.  The best way for me to sum up the show is that it’s like one big party.  The band has some very loyal fans that know every word to every song.  The band consists of Bobby Mahoney on vocals/guitar, Andrew Saul on guitar/backing vocals, James McIntosh/drums, Jon Chang-Soon/bass/backing vocals and Zack Sandler/saxophone.  Mahoney kicks it into gear from the first cymbal and guitar lick anthem Another Deadbeat Summer.  The song is so good it should be an encore song.  Mahoney holds nothing back, and this sets the tone for the amazing show.

The next four songs – Empty Passenger Seats, Called It Quits, Shot In The Dark, Jackie Was a Renegade are each great high-energy songs.  Jackie Was a Renegade was sung with the addition of the Seventh Son alumni Jon Alba, Joe Larkin, Dan Cohen, and Ian Wolston.   The four former members of the band came up on stage and sang and danced making the song a rousing party song.

Danger Dan, Lorraine. Leave It Frayed and Ride Alone continued the frantic pace of the set.  With each progressive song, the band and the crowd each get sweatier and sweatier.  There’s no letup until Black and Milds, but only for the first five minutes of the song.  Tori Tibbetts sings along with Mahoney on this and on All These Things That I’ve Done made famous by The Killers.  The final two minutes of Black and Milds has Mahoney and Saul each with dueling guitar solos, bring the house down.

Rounding out the show is 38 Special, Roaring Twenties and for the encore Anxiety Queens.  Now I know why Jon Bon Jovi had Bobby Mahoney and the Seventh Son opened for Bon Jovi at The Prudential Center last month.  The band is dope!!!  They’re keeping the rock ‘n’ roll torch lit.  Rock Ain’t Dead Yet!!  Be sure to be one of the first ones to checkout this awesome band out.  Bobby Mahoney and the Seventh Son will be playing along the East Coast all summer long.

Full gallery of photos here. Check out the Live Music News and Review.com Facebook page for updates and announcements.