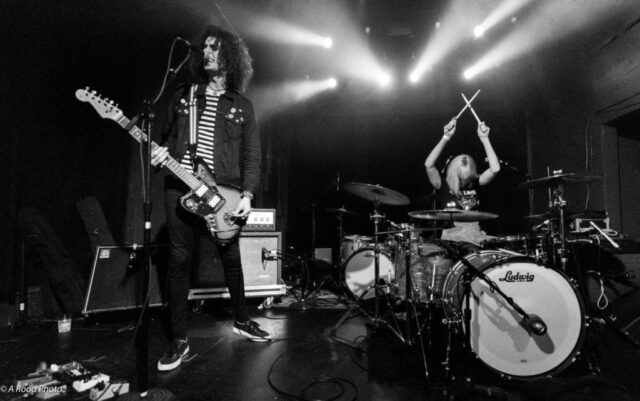 From the Two Tens Video Channel

Full Gallery of Photos of this show is here.

The call-and-response continues as The Two Tens kick off their set at The Echo on a Saturday evening in June.  The opening song, “Scene,” is what The Two Tens are all about: head-banging, hip-swaying, feet-tapping rock/pop music sure to get you moving and engaged.  Styxx doesn’t miss a beat while Bones hits the melodies vocally and musically as the singer/guitarist of the duo. Their name is quite literal: they are two people who are 10/10… hence, The Two Tens. “Crush Me” follows, then goes straight into “Ella Don’t Like My Hat” in a Ramones-style set list where most of the songs are played rapid-fire one after the other, keeping the crowd lively throughout.  Styxx gives a brief description of who “Ella” was written about, the friend of the band patiently waiting beside the stage to handle transactions for CDs, records, T-shirts and the like.  It’s a perfect opportunity for Bones to do what any musician must: shamelessly promote the merchandise. The set list revs up with the title track off their second album, “On Repeat.”  For only two people, The Two Tens make quite an impression, both visually and musically.  If I closed my eyes, I would never guess their big sound comes from only a guitar and drums, impressive to hear at a live show. It’s difficult to choose which band member to watch because they’re both such great performers. Bones jumps around on stage, eats the microphone, flips his guitar over his head, and high-fives fans during breakdowns while Styxx twirls her cymbals, sings backing vocals, whips her bobbed hair, and at one point even stands on her drums in a miniskirt and lace tights, with her tongue sticking out!  How rock and roll is that?!  They are having fun on stage, and it definitely shows. Hard-hitting ’90s grunge, bubblegum pop, and garage psych tunes: that’s what The Two Tens give you.  There’s a little something for everyone to cover the spectrum of rock music.  Their set is a fun, captivating, whirlwind show from start to finish.  You get to know Bones and Styxx through their energy, entertainment, storytelling, humor and, of course, great songs. The Two Tens really are two tens.

Full Gallery of Photos of this show is here. Check out the Live Music News and Review.com Facebook page for updates and announcements.