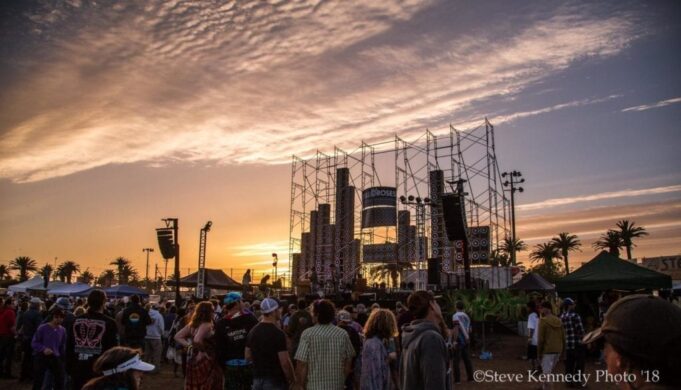 Skull and Roses 2 was a weekend festival celebrating the joy of the Grateful Dead kicked off at the Ventura county fairgrounds April 6, 7 and 8th. The fairgrounds were host to 11 Grateful Dead shows during the 80s. The set up was located on the racetrack, a hard dirt track open air arena. Two stages were situated on each end with the vendors lining both sides. The soundboard and lighting crew set up was in the middle allowing for continuous flow of music. The main stage had a remarkable replica of the Grateful Dead’s 1970’s Wall of Sound. Although it was a prop, complete with scaffolding reaching some 40 feet into the air, it provided a dramatic backdrop for magic that was to be created in front of it.

On Friday around 4 o’clock I arrived at the fairgrounds to check in, the on-site campground was looking very full and the camping location was literally right next to the beach and the Pacific Ocean. It was pretty windy as the start of a cold front was beginning to push across the area. I hit the main complex where the music was staged and found The Electric Wrist Band playing on the small stage at the east end of the track. The East stage features a backdrop with a picture of Pigpen surrounded by roses. The quality of sound was great and ability to move up to the rail and have plenty of room was a nice bonus. This weekend was not for the innocent by stander, the looky loo or the casual fan on the fence of liking the Grateful Dead.

This festival is all about the love of the Grateful Dead, a tribute to the music and a celebration of the culture. It is the brain child of Producer Chris Mitrovich, who put in countless hours of work to craft a vision of community spirit, trust, and a place to come together for each other and the music that binds us deadheads. Chris created a festival that seemed to run itself, even thou tons of work went on behind the scenes. It’s a credit to individual responsibility and a sense of community that fostered such a euphoric atmosphere for everyone to enjoy. The Electric Waste Band is from San Diego and has been known to have Bill Walton sit in on drums. Then as they finish their set as 9 Mile Skid seamlessly eased into  their set over on the main stage. This will continue throughout Friday and Saturday as one band would finish and the next band would start right up, a stream of continuous music.

The folks in the middle of the arena would only have flip their chairs around to see the next stage. 9 Mile Skid is a local band from Ventura, they featured the song New Speedway Boogie a fitting tune that would be replayed many times over the weekend. With the setting sun falling behind the wall of sound they finished jamming their set and passed the torch over renowned Grateful Dead historian and voice of the GD Hour, David Gans. David was joined during his set by Stephen Inglis, one of the highlights was a beautiful Wharf Rat. The evening was cold and very windy with dirt and dust swirling around the complex as the Friday night headliner Cubensis hit the main stage.

Audio of Cubensis, use the arrows to toggle between the songs:

Cubensis has been a Southern California mainstay since the 1980’s playing well over 3000 shows. Having seen them many times over the years it was nice to hear them on the big sound system in front of the towering wall of sound. The night lights illuminated the wall of sound or as I affectionately dubbed it “the 197faux wall of sound”, it really gave the stage a lot of character and a tangible electricity, it really made the stage pop.

Cubensis sounded on point blistering through two sets of GD music including Lazy Lighting>Supplication, Let It Grow and Standing on the Moon. Day 2 was here and no rain had fallen. The forecast during the week was for 90% chance of rain on Saturday morning. Rain would have turne   d this whole thing into a muddy mess out on the dirt track. Skull and Roses was a destination boutique festival. Everyone was there to enjoy the vibe and the culture that the GD community have created over many decades. They say that Bobby controls the weather, thanks for looking out.

Audio for Roosevelt Collier, use the arrows to toggle between songs:

Day 2 featured 11 different bands starting at 10am and ending well after midnight, not including late night prankster jams in the camping lot. The star of day 2 or maybe the most sit ins award goes to Jason Crosby who played with Moonalice, sat in with Roosevelt Collier with Lebo on guitar then played a long set with Stu Allen and Mars Hotel. There were so many highlights from Saturday from flying Alligators to Steve Parish talking about the days after Pigpen died and how the band talked about quitting before Jerry said they should keep playing, wow…and look at where we are now.

Rodger McNamee anf Moonalice played a wonderful set of Dead songs including a sweet Stella Blue. One of the most anticipated bands of the day for me was Circles Around The Sun. CATS first album was the music played between sets at the wildly popular GD50 shows in Santa Clara and Chicago. They had the sunset slot with the ‘197faux wall of sound’ bathed in golden California sun behind them. They did not disappoint. Neal Casal, who lives locally and could have walked to the venue, wrote and recorded the album in Ventura and he said this band was basically a Ventura local band. How fitting for his music to be received in such a warm environment.

Finally the Saturday night headliner Stu Allen & Mars Hotel took the stage. Stu’s set was supposed to be two but ended up being one long set with long pauses in between songs as he tweaked his gear. He played a Les Paul, a Strat and his Irwin during the set. They sounded fantastic with Stu’s voice inflections mimicking Garcia, the whole band would really get things going. Some of the highlights were The Music Never Stopped, Scarlet>Fire and Terrapin Station. After day 2 we were dusty and dirty, feet were sore but late night prankster jams were calling.

Audio of Stu Allen and the Mars Hotel, use the arrows to toggle between songs:

Day 3 had a much different vibe. The Sunday show would only feature 3 bands all playing on the main stage. The sun was out and the weather was warmer, it felt like a day to soak it all in and enjoy the company. Use the arrows to toggle between songs on this audio for The Grateful Bluegrass Boys.

From the video channel of grunzy

The Grateful Bluegrass Boys kicked it off with a nice twist of bluegrass jams including my highlight ‘Ramble On Rose’. Next up was Jerry Garcia Band with Melvin Seals. JGB played the same slot in last year’s fest. This set featured a nice arrangement upbeat tunes like Tore Up, Cats Down Under the Stars and Midnight Moonlight. No Sunday show would be complete without a little gospel from the choir, in this case from recently added members Sunshine Becker and Lady Chi. They really brought it vocally singing ‘I’ll Be With Thee’ and ‘My Sisters and My Brothers’. Finally to close out the weekend the much heralded Golden Gate Wingmen. They tore through two sets putting their twist on songs like Sugaree, Lazy River Road, Help>Slip>Queen Jane, Believe It or Not and Ripple. The soulful encore, ‘Brokendown Palace’ was played with a touch of class and sang eloquently by John Kadlecik. Such a fitting encore to wrap up a fabulous weekend of friendship and celebration.

Audio of Golden Gate Wingmen, use the arrows to toggle between songs:

What a festival, yes there were some elements to endure, chilly winds blowing, dancing in the dusty dirt, sore feet and maybe a sunburn or two. I heard 4 New Speedway Boogies, 3 Terrapins, 2 St. Stephens and 1 flying Alligator but it never seemed to old or boring for me because every band would have its own twist or a turn to keep it fresh, every band had talent. In 3 days at this festival I did not incur one negative vibe.

Not one from security or one from an over served individual or a loud talker. Chris Mitrovich said the fairgrounds were into it, he was into it and as long as the fans were into it he would throw the party again next year. So here’s to the staff, the dancers, sound and lighting guys, tapers, videographers, photographers, reluctant MC’s, publicity and artist relation crew, roadies, campers, wharf rats, artists and rail riders…safe travels and hope to see everyone next at Skull & Roses 3.