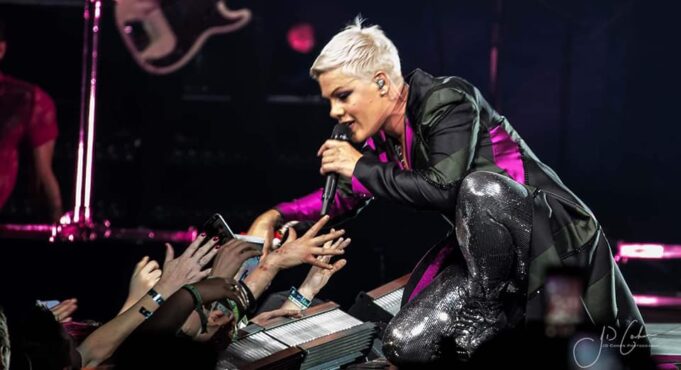 From the video channel of Stefania Cheli

Alecia Beth Moore, better known as Pink, performed her second of two sold out shows at the Boston Garden on Tuesday April 10th.

For the uninitiated, Pink rose to fame in 2000 with her double Platinum album “Can’t Take Me Home” and she has had a string of mega hits since; including “Raise Your Glass”, “So What”, “Just Like a Pill” and “Let’s get this Party Started”. In addition to being one of the biggest selling contemporary artists of this decade, Pink has also become a symbol for feminist girl power for women both young and old, repeatedly making statements that lean towards empowerment and breaking down gender norms throughout her career.

The female energy was palpable on Tuesday night before, during and after the show as groups of women took over the Garden and the surrounding Causeway Street in Boston. Many came dressed in costume and even more came to party…hard. Before Pink even took the stage at least four drunk women carted off on stretchers, a result of over drinking. A group of women, tired of waiting in line for the bathroom took over the men’s room. It wasn’t always pretty but it was great to see so many women of all ages out to have a good time and feel completely safe in their surroundings to let loose.

Regardless of her progressive feminist status, in many ways Pink is a classic pop star and her stage performance contains all the flash and sizzle of top arena acts like Madonna, Britney Spears, Katy Perry and Beyoncé. Pink has a powerful voice and a collection of catchy hits but the over the top  production makes it hard to focus on the music as you are bombarded by the larger than life stage sets, dancers and numerous costume changes.

The sets and the physical stage are massive and throughout the show Pink looks like she is trying to break free of their constraints to reach the audience. Her signature move during her live show is the much hyped acrobatic trapeze act, hanging from a chandelier high above the stage and flying though the stadium. The airborne aerobics are more than just a stunt. The apparatus that allows her to fly also enables her to make contact with her fans in the most remote seats in the house.

Toward the end of the concert when Pink takes full flight she seems to be in the air for a long time and she’s not just doing back flips and somersaults. As she moves from one side of the stadium to the other and to the back and the highest reaches of the Garden she makes incredibly close contact with the audience and the whole extravaganza seems more of an effort to reach out and make contact than simply to impress.  It was all amazing and few in attendance will ever will forget the sight of Pink suspended above the stage swinging on a chandelier or flying high above the crowd at the Boston Garden.

However, if you were fortunate enough to be close to the action what you will likely remember most is how much fun Pink seemed to be having and the little interactions and smiles exchanged between Pink, her fans and some of the artists and crew that support this massive production.

From the video channel of Stefania Cheli