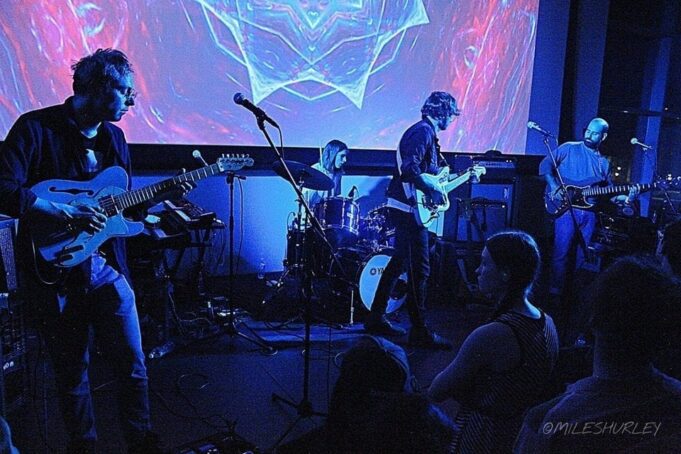 Indie rock outfit Real Estate closed out their April run of shows this weekend for a unique gig at University of Connecticut’s Student Union Ballroom. The show was a quick but incredibly satisfying set of music from the New Jersey quintet, complimented by a terrific feel-good night of musical admiration all around.

Hosted by WHUS Radio, the official and student-run radio station of UCONN, the Spring Fling was a chance for senior students to put on a unique musical experience for fellow graduating peers, as well as take the opportunity to raise appreciation for the independent and progressive spirit that cornerstones not only WHUS but college radio in general.

Opening up for the night was Mild Monk, a sophisticated six piece comprised of UCONN students that were playing a farewell show of sorts-their lead singer, who announced an upcoming move to California, lead the group on their tunes that had a very close vibe to that of Mac DeMarco.

Following them and warming the stage for Real Estate’s set was Rips, out of Brooklyn, NY, who commanded impressive, dogged musical chops, which carried sullen, garage-rock sounding songs across tight but free-feeling strides.

As Real Estate took the stage, UCONN’s Student Union Ballroom saw a few hundred senior students, soaking in their last days on campus, crowd together in congenial huddle around the stage, hanging on every sound that was about to come pouring down onto the floor. The band hit into their set with a respectable gusto, getting everybody moving instantly. After they had burned a couple of the first ones, and the ballroom was locked in a wonderful headspace with the band, bassist Alex Bleeker mentioned having played this university several times, including a previous date with Real Estate roughly eight years ago. They were happy to be here, and the fact showed colorfully in both their playing and their congenial rapport with UCONN students.

Guitarist Julian Lynch showed up with his soloing, taking on some cool changes in tone and feel across them. Just last month, the band released their fourth studio album, In Mind, which is their first record with Lynch as a guitarist. To pretty much widespread agreement from the musical world, it stands up with their beloved works of the past, offering sentimental songs that maintain the beloved dreaminess while holding on to moveable, comfortable grooves.

And there was a real rollercoaster ride. Well, a virtual one. A virtual one that really happened. Towering behind the bands for the night was a massive video projection screen, which was the work of WHUS Radio. As the members of Real Estate on and off looked up in bemused admiration, Bleeker mentioned that it reminded him of the virtual rides at amusement parks.

When the band dove into their next tune, the projection video screen discreetly changed its loop into POV footage of a rollercoaster ride. The UCONN crowd in unexpected unanimity simulated an audience on a virtual park ride, and threw their hands up in the hair and screamed in hokey glee. The band noticed this, and it seemed to inspire the swirling groove even more, towards a delightfully heady flowing over of energy. Martin Courtney, lead singer and guitarist said jovially into the mic, “Whoever’s running the video projections, you’re hired!”

Real Estate pushed hard on their last several tunes, rocking them to delicately hypnotic limits. Bleeker showed his chops and walked off the normal bass line path, in his musically thoughtful manner, while Courtney found punctuated moments of tiny ecstasy to ring out his guitar in sonic feedback. The night coalesced into a rosy, whimsical whole, adding up its parts of a passionate crowd, a musical savviness cultivated by the spirit surrounding WHUS’ presence, and a band sounding as sweet as ever in their ninth year playing together.

So far, Real Estate has only one show listed for the month of May, a date on the 18th at Gallagher Way in Chicago, Illinois, with The Record Company opening up. Then in June, Real Estate will play their spring tour, joined by NY-based band Habibi. To check out those dates along with more info, head to http://www.realestatetheband.com. by Miles Hurley

Reprinted with permission from The Poke Around.