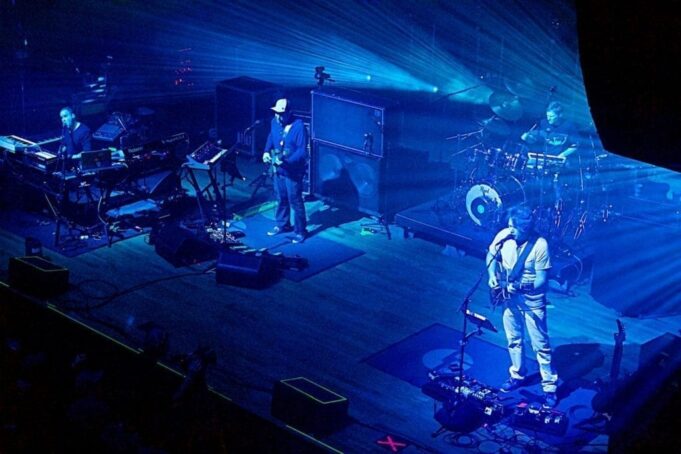 The Disco Biscuits kicked off a huge weekend of shows through the northeast with a show at The Strand in Providence, RI. The Strand, which many may know to be formerly known as Lupo’s Heartbreak Hotel, remains in 2018 a big and classy place to see an epic rock performance from the likes of jamtronic titans The Disco Biscuits.
The Biscuits show on Thursday had an opening set from Boston-based jamband Strange Machines, which seems like a pretty good gig for the Boston quartet, given their relative size. Yet they served the night well, by really getting the crowd that was present pretty noticeably excited for the night early on. Machines’ sound was actually very well complimenting to the Biscuits’ own-a youthful, almost zany approach to jamming that brewed up a lot of very heady funk.Their jams might even harken for some listeners back to the early style of the Biscuits, around the late nineties, where straight, college rock was the sound that cradled their unpredictable creative ways of playing songs, and the way they moved stealthily between funk and some very bliss-type, musically pretty rises, with bright piano sounds and fluid rhythm section work propelling from each end.
Check out the gallery of photos of Strange Machines here.
Of course, The Disco Biscuits are still creative in 2018-in fact, of all the large jam groups out there, The Biscuits might be the most consistently adventurous with their live shows. Starting off shows with an into improv jam is still commonplace for The Disco Biscuits these days, and The Strand show Thursday night had a good one, that climbed quickly to an uplifting mini peak before its drop into the opening tune for the night, “Strobelights and Martinis.”
Then the untz was particularly strong for a first set, as they tunneled their way through the digital depths of Martinis and the long “Gangster” coming out of it. Magner kept mostly to experimental or ambient sounds, thrown at the tip points of the rest of the groove from the band, while Brownstein laid down a straight line of slowly modulating bass lines. Gangster rallied by its end for an exciting transition into “I remember when,” which complimented the mechanical nature of the first set with its own colorful, artsy uses of electronic sounds. This comprised an ambitious three song set, without counting the intro jam, and that’s higher on the rarity side, even for a band as regularly exploratory as The Biscuits. You can bet The Strand’s crowd was dialed in for this. Everywhere, between colorful costumes and jerseys and painted faces was a constant energy that kept people moving, moving around the theatre and in their spots for pretty much the whole show.

Check out the full gallery of photos of the Disco Biscuits here.

Shem-Rah Boo can one of the most energetic , and it’s great when it’s live jam follows the main composition’s craziness. This night’s version busted opened set two with some manic piano soloing from Magner, and then it raged on until a cool off into “Above the Waves.” Waves, also usually promising to be the one of the deeper vehicles of a Biscuit set, was inverted version, brought jamming of the more psychedelic taste from the whole band. After a return to “Shem,” Barber then closed out this segment with a surprise ending solo, sending out a wicked, almost depraved guitar tone. This was continued on into a portion which saw just Barber on stage, for a more subdued bit of guitar playing that made for an almost poignant part of the night.

The video begins just after the thirteen minute mark.

“Confrontation” sandwiched another big segment, with the band heading here into “Crickets,” which by its second half landed into a much more uniform presentation of Biscuit classic style of digital funk, some of the ripest material for zoning out into a repetitive dancing zen. “Air Song” followed with more well-rounded, exploratory playing from all members that capitulated into the night’s most ecstatic, driving peak, straight through to the end return into Confrontation. It was a terrifically strong cap to offer at the end of this musically far ranging show.   Yet, there was even more, possibly better stuff to come, in the better than average encore of “Mr. Don,” which the band took for one last, long and groovy ride for the evening.

Check out the full gallery of photos of the Disco Biscuits here.

Check out the gallery of photos of Strange Machines here.