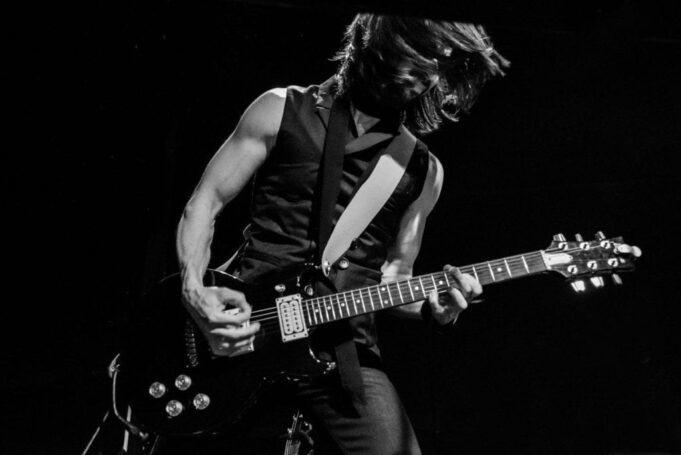 From the Scarlet Sails video channel:

Women-powered, Los Angeles-based collective PLAG (Play Like A Girl) presented their first showcase in New York on Friday. The power-packed showcase celebrated women who rock, such as opening bands Ex-Girlfriends and Sharkmuffin. Headlining were kick-ass quartet Scarlet Sails, bringing with them a turbulent, firestorm of rock/pop. Scarlet Sails is led by Moscow-born singer/songwriter/pianist Olya Viglione. Her crew is made of guitarist Mark Kohut, bassist Dave Lowenthal, and drummer Brian Viglione.

The set opened in bold rock-and-roll fashion with It’s Alright. Olya approached the stage with a brand of excitement and attitude you only see from legendary front-women. The band’s energy was contagious from the start, with the crowd in this intimate venue giving roaring applause, ready for more. Olya’s unique voice is warm and inviting. Strong, yet gentle. Her drummer and husband Brian (of The Dresden Dolls) never fails to impress with his natural ability and precision. Dave’s rock steady bass rhythms provided the perfect compliment to Brian’s percussive beats. Fans sang along to tracks from the bands’ remarkable debut album “Future from the Past”, such as the empowering rock ballad As I Am, and Motown-inspired, dream-like Precious Times.

New material was received with much enthusiasm, moving the sea of listeners to the infectious beats of songs such as Who, ME?, Upside Down and Strawberry Moon. The bands’ debut of Me Too, a song written and performed with astonishing bravery, packing just as much emotion and meaning as the name implies, left the crowd entranced by its haunting melody. This also marks the first song to feature Olya playing guitar; a beautiful Cadillac green Gretsch electric. Their upcoming single Hideaway makes good on the promise they showed with Future from the Past, demonstrating the kind of growth and sophistication one expects from a seasoned band with a notch in their belt. Mark’s harmonic guitar licks provided a solo to remember.

The band then performed a killer cover of Desperado, Olya placing a spell over the room in a way that would make Alice Cooper himself proud. Kaori Kiki Nakajima (saxophone), Indofunk Satish (trumpet) and Adam Sterr (viola) joined the quartet on stage, elevating the song to new heights. With their exhilarating live presence, Scarlet Sails had every person on the floor yearning for more, because as brilliant as they already are, the best is yet to come.

From the Scarlet Sails video channel:

Set List:
It’s Alright
As I Am
Precious Times
Me Too
Hideaway
Who, ME?
Desperado
Upside Down
Strawberry Moon
Boy, You’re Wrong
Spell My Name
Everytime