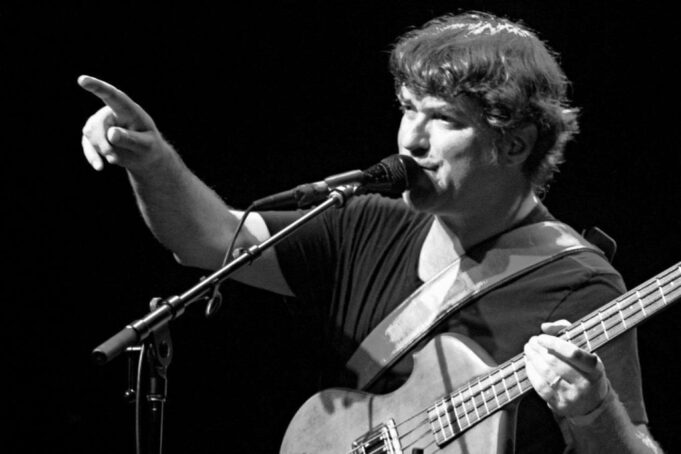 White Eagle Hall is coming to the scene as a relatively new place to see music, and it’s a pretty cool space. The long, grand-looking theatre is crowned over by a trippy skylight way above, and a big crystal disco ball near it. WEH commands a big rectangle floor type space, with a sound that carries nicely al the way to the back for those hanging out near the bar. Keller Williams, the one and only, passed through there Thursday night as part of his brief run through the northeast, and the place went all things Keller for the evening-the bar even had a couple of special KW-themed mixed drinks at the bar called Dubra In My Pocket and More Than a Little Vodka.
After kicking things off in his down-to-earth way-chill, acoustic guitar picking on the edge of stage among the hyped crowd in front of him-Keller wasted no time in starting the show off in a wonderfully experimental way. Keller plays with a ton of different musicians, in a smorgasbord of different projects, but his solo gigs are special in their own way. He can dart into any musical direction, throw in any kind of creative or kooky monkey wrench of an idea, at his own often whimsical pace. “Sing For My Dinner” was an immediate first example of this, encountering brief bouts of swing jazz in and out of the tune’s bouncing melody.
Highlighting this set from Keller Williams were a string of covers that diehard fans know he treats in cool fashion. Heading these off was his Morphine jam, Buena. Keller started this one with a vocal jam, a nifty feat for someone playing a solo show. Indeed, his sets are filled just as much with his physical expression as his musicality. A multitude of funny faces, quick one-liners, dance moves-whatever Keller’s jams are making him feel in the moment, he translates perfectly to an uproarious audience.
In his perfected methodology to breaking down a layered, looped groove, Keller jumped on his electric bass for tunes such as Buena, and the man can put down some pretty tasty basslines. Following this and the slick drumbeats that accompanied it, Keller returned to his guitar to let his gorgeous tone ring through White Eagle Hall. A half-droning, half-wooden-emblazoned tone that speaks the sound that is distinctly Keller. He played a number of cool, heady solos using this guitar sound, and they came as the perfect touch on top of the funk he laid down below.
At the top of the covers list for many was Keller’s now-classic segue of Birdong->Birds of a Feather, two groovy tunes united on this night by some quieter, spacier guitar playing. Deep into it, Keller showed his chops on both a flute and a triangle and made the two-song swing a meditative drive. As he took the crowd though this cosmic combo, people went “Ahhh, get it? Bird songs for White Eagle Hall.” After this there was also the bluegrass-treated breakdown on Beyonce’s “Drunk in Love,” which people were digging, as it sounded like just the kind of thing he might jam on if he were joined by his Traveling McCoury buddies.
Keller finished up with some originals, with “Kidney in a Cooler” to encore, and it was a tight wrap-up on certainly a feel-good night in Jersey City. The man put a great-sized crowd in White Eagle Hall, and made sue they really enjoyed themselves the whole time.
To submit a story or to just say hello, email us at [email protected]
Check out the Live Music News and Review.com Facebook page for updates and announcements.