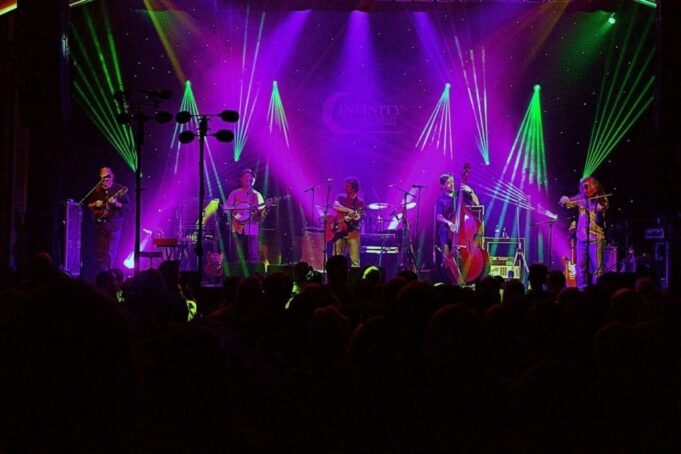 Sunday night, Railroad Earth played to a packed house at the great space of Hartford, CT’s Infinity Hall, and what started out as a couple of fine Earth sets ended up taking on emotional and musical high points across a strong night on tour.
Good Railroad Earth sets wring out every last bit from the band’s combination of magnificent americana songwriting and their collective musical abilities-which is yin-yanged between tenacious compositional skill and a collective creativity when it comes to coloring in between the lines.
Sunday night in Hartford was a full display of all of this. After a “Been Down This Road opener,” the band immediately dove off the cliff of musical sanity with a big, weird version of “The Hunting Song.” Andrew Altman’s mighty standup bass, which was resounded very nicely this night through Infinity Hall, took on an almost electronic booming in the back, while Todd Sheaffer led the band on some shrilling, droning space.

Check out the great photo gallery with many excellent shots of this show; maybe you’re in one of them!

The band wrenched things back up to an upbeat vibe with the breakdown song “Drag Him Down,” followed by “Chains” and then “For Love,” each of these which delivered rounds of great bluegrass solos from all on stage. Set one rounded out with a fantastic combination in “Farewell to Isinglass” and “Grandfather Mountain.”

John Skehan and his energized mandolin soloing led the band on a strong finish in “Isinglass,” before the song dropped very neatly into “Grandfather Mountain.” Picking up from the steam of this fantastic segue, Mountain found its way into a gorgeous, graceful ending jam, one that had Skehan dropping some tender piano playing onto the band’s really serene playing.

Coming back for set two, Railroad Earth started up again with a favorited back-to-back pairing of tunes of “Chasin’ a Rainbow” and “When the Sun Gets in Your Blood,” a couple of songs that just lay thick on the feel-good vibe. “Carryigng Coal to Newcastle” brought another strong segue, straight into the intro jam for “Mighty River” and then the Bird in a House classic. From here is where set two for the night started to get really interesting. The band started off a big, affecting segment with the newer original song, the politically inspired “Adding My Voice.” The lines repeated over and over in this stingingly powerful song read:

The band released the song last year and cited the nation’s current political climate to be the drawing material. But months later, with recent tragic events having transpired, “voice” hits all the much harder right now.

The band kept on going in this beautiful route with “All That’s Dead May Live Again,” a beautiful song that worked as a great mirror opposite to “Voice,” both musically and lyrically. Again, given the air of the days we have all been witnessing and living through, the combination of these two mournfully hopefully pieces of music could not have been any better. Looking around the hall during this point of the night, Railroad Earth fans were singing along with closed eyes and open hearts, with their hands either tenaciously clutching the stage or thrown up in the air in a grateful awe of the six-piece string band’s performance.

As on their most recent album, Last of the Outlaws, “Live Again” bled into the super cool, surreal jam that is “Tuba Mirum” and “Face with a Hole.” For these, Gosseling picked up the soprano sax and helped the band turn the second set into a jazzy dream ride of improvisation-a truly musically vibrant and rousing way to end set set two.