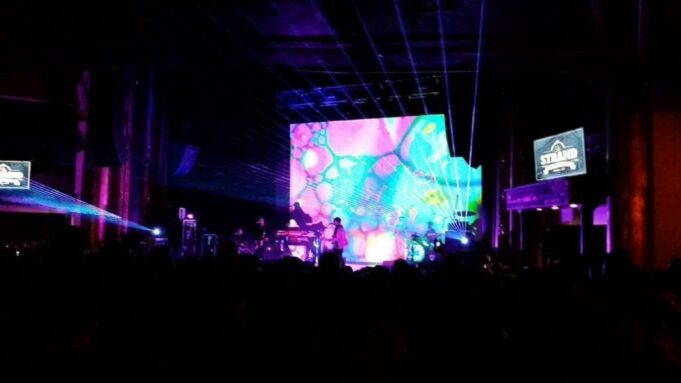 Twin Peaks was the band who opened for Portugal. The Man (PTM) at the Strand Ballroom & Theatre, in Providence, RI on Feb. 22, 2018. They gave it their all and played with abandon, songs interspersed with their frequent vocal “WAHOO”s. However, as with many opening bands in small venues, they suffered from a muddy sound that made it virtually impossible to adequately hear or understand any of the multiple singers in the band. As a result, they really shone when they turned away from their microphones and concentrated on the music. During these brief instrumental interludes, they could rev up the energy like any good jam band. I found myself wishing that they did more of that or that I could have heard them in a more intimate atmosphere. This was in stark contrast to PTM, when they took the stage with a clearly better sound system.

A few songs into PTM’s performance, they projected a statement on the screen behind the band, “We’re Portugal. The Man! Just making sure you’re at the right concert.” This commentary wasn’t out of line, considering that they played an abbreviated version of Pink Floyd’s “Another Brick in the Wall, Part 2”, replete with psychedelic patterns projected behind the band from sources at the front of the stage, enabling the band members to cast their own shadows onto the screen like a modern-day Syd Barrett. The audience wasn’t kept guessing for long though, as the driving rendition of the Wall-era Floyd song morphed into “Purple Yellow Red and Blue” from Evil Friends.

For most of the evening, PTM focused on songs from their latest two releases, Evil Friends, and last year’s popular Woodstock. Considering that they have been releasing music since 2006, it was a bit surprising to hear them spend so much time on music released since 2013. They focused on the rock, rather than the pop material, with the bass and drums vibrating the stage and the whole theatre all night. There was a noticeable lack of dynamics – it was straight ahead, no holds barred, from start to finish. Despite the rumble and volume, the excellent singing of lead singer John Gourley, and background/harmonies from most of the other members of the band, came through loud and clear.

Without a doubt, one of the standout features of this current tour is the visuals. They utilized projections onto the screen behind the band throughout the show, with visuals ranging from psychedelic patterns to sometimes disturbing and/or suggestive computer-generated images, often involving mannequin-like figures and faces. Lasers streamed out over the audience all night long, playing their patterns in a full range of colors. Occasional text images were also projected onto the screen, in lieu of too much on-stage banter. This actually worked quite well, considering that it is usually difficult, or nearly impossible, to parse on-stage banter in the close-knit acoustics of a place like the Strand. Text statements often caused roars of approval from the sold-out crowd, such as when they flashed up “We don’t like to talk about politics, but this needs to be said.  FUUUUUUUUCK!”

Long-time fans may have walked away disappointed with the lack of breadth from their discography, but overall, the energy in the building was high and most people seemed thrilled with what they got. I sure was.