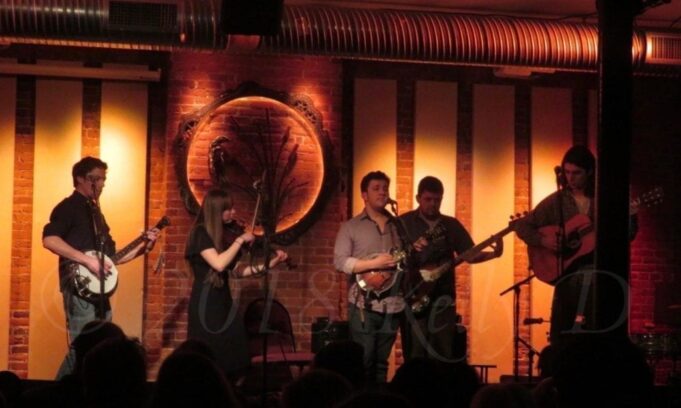 Where else in the area but Hawks and Reed can you pay just $25 for five nonstop hours of top-notch Valley musicians showing off their craft? . . . I’m pretty sure it’s nowhere. Not even a year into their rebranding from the Arts Block to Hawks and Reed Performing Arts Center, the team at 289 Main Street has truly curated a list of must-see concerts month after month. This was fully on display last Friday at the Winter String Jamboree in the Arts Block Ballroom, featuring Mikey Sweet, John Sheldon, Mamma’s Marmalade, Eric Lee and Co., and Tracy Grammer- all standout performers in the folk-bluegrass scene of the Valley. Tracy Grammer with Jim Henry accompanying took the stage first. I knew Tracy had performed recently in the area, notably opening for Paula Cole on the same stage she was playing tonight, but this was my first time seeing her. Wow, what a quiet dynamo! Her confessional style of songwriting was quite reminiscent of Carole King but her guitar-pickin’ was a little more country. She shared many stories of her past and some hope for her future, settled in Greenfield as she is now. Grammer even dedicated the song “Gentle Arms of Eden,” first sung as a duet with her late partner Dave Carter, to her adopted hometown of Greenfield.

Eric Lee and Company came on next. Mr. Lee is a multi-instrumentalist, singer, and songwriter. Hot on the heels of his Heartache Town CD pre-release party, which packed Luthier’s Co-op to the gills back in late December, Lee performed a bouncy set with his backing band. His band this evening was Jim Henry on guitar and mandolin, Paul Kochanski on bass, and J.J. O’Connell on drums, each holding their own. He jokingly mentioned (at least, I think he was joking. . .) how he wasn’t planning on playing his violin but all the radio advertisements for the show on 93.9 the River described him as a master fiddler! So out it came for part of his time onstage. He had Sean Davis of Mamma’s Marmalade on for a few songs and performed “Another Bloody Mary Morning” with Lily Sexton, also of Mamma’s Marmalade, accompanying him on fiddle. A highlight of his performance: a 21st century lament on the “phantom vibration” sensation we’ve all experienced at one time or another, with a decidedly 20th century feel.

Mamma’s Marmalade was third, and dang! What a fun group of talented players. Each bring their own skills to the table and the band is super tight with great harmonies. They are: Lily Sexton- fiddle, vocals Mitch Bordage- mandolin, vocals Rich Hennessy- banjo, vocals Curtis Bordage- bass Sean Davis- guitar, vocals As I was situated in the back I had free rein to bop around a little while they were gettin’ down. Even a horrible audio boom from the sound system didn’t break their stride. At this point, I was getting a bit antsy so I ducked outside with a couple of my pals to hit the salad bar, so to speak. It turned out to be exactly the right move as John Sheldon took the stage next and gently blew our minds. “He took me on a journey with his guitar!” Rich from Mamma’s Marmalade told us outside, speaking of a previous performance, and this one did much the same. A legend in his own right, John Sheldon weaves his guitar playing and storytelling and singing into a beautiful mental tapestry. Partaking in greenery beforehand was the perfect move. I sat, zoned yet attentive, as his quiet countenance spoke deep into my soul and his butterfly fingers fluttered up and down his guitar strings, providing a most healing soundtrack. Nearing the end of his time onstage, Sheldon mused, “What a trip. Thank you for coming on the journey with me. . .” He then encored with the anti-fracking opus “Water is Life,” which resulted in a standing ovation. Man oh man. I’m gonna have to see him again REAL soon.

The final performance of the evening arrived- Mikey Sweet. At the end of the night, he thanked me for “sticking around till the end- that was like five hours!” which was no issue on my part- I very much enjoy his wanderlust-filled road warrior tales of troubles and triumph. Though the crowd for most of the evening was sitting down, I was happy to see a few women get up and dance to Sweet and his band. I ended up joining in too, particularly for Sweet’s tune “Brick Wall” which is a jaunty tune of realizing one’s failures. Though the song never comes to a happy conclusion, per se, the cheery melody implies Sweet finding the motivation to start over again and do better. Who can’t relate to that? Sweet invited Eric Lee up to sing Ricky Skaggs’ “Talk About Suffering” to wrap up the jamboree. What was left of the audience joined in clapping along to the a cappella duet and ended the night on a triumphant note. See, Mikey, some things are worth waiting till the end of- and this evening of local superstars absolutely fits in that category.