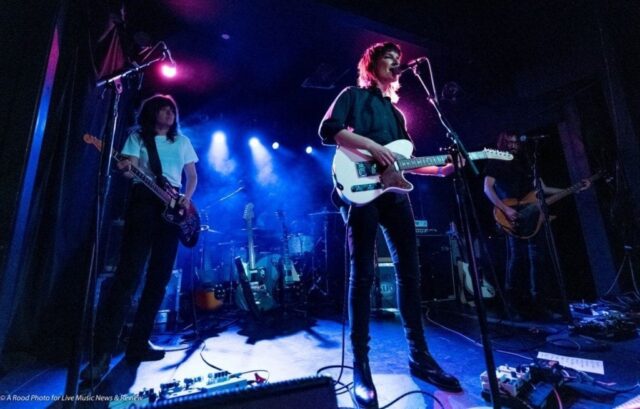 Jen Cloher
The Echo  LA CA
January 23 2018
by Stevo Rood
To submit a story or to just say hello, email us at lmnandr@gmail.com
Check out the Live Music News and Review.com Facebook page for updates and announcements.
Opening her U.S. tour in Los Angeles, Melbourne-based Jen Cloher played The Echo to a full house on Tuesday, January 23rd. With her following, she didn’t need a “third” opening band and just had the wonderful Mia Dyson, also originally from Australia (but now residing in the States) warm up the crowd. The show featured 8 tracks from her 2017 self-titled release, which included “Forgot Myself,” “Strong Myself,” and my personal favorite, “Sensory Memory.”
The songs were very reflective of her personal life and the grind of the music business. Joined on stage was her partner- another well-known Australian musician- Courtney Barnett, on bass. Both Jen and Courtney jammed to the fans excitement in between Jen’s lyrics.
Jen finished the evening with an encore of two songs from her earlier recordings, one from “Hidden Hands” and one from “In Blood Memory.”
Jen’s latest release is a finalist in this year’s Australian Music Prize, one of the most prestigious competitions in Australia! It’s uniquely coveted because it celebrates the craft of the album and not just a single track as is common today.
Tour Dates:
Portland, OR 1-26
Seattle, WA 1-27
Brooklyn, NY 1-30
Philadelphia, PA 1-31
Washington, DC 2-1