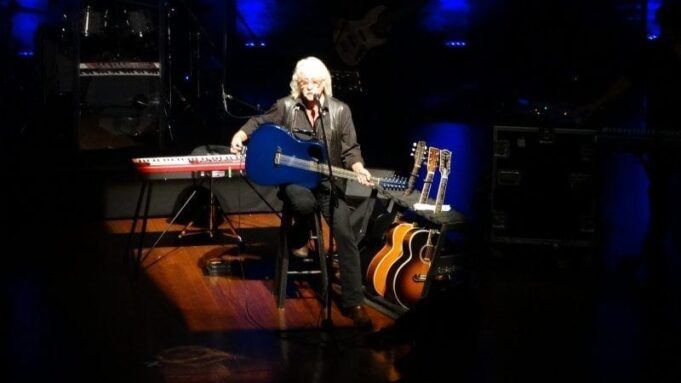 Arlo Guthrie out on tour An interview by Ryan O’Malley

He was born into a household that utilized music to not only tell stories, but also protest social injustice. On a fateful Thanksgiving Day in 1965, he was arrested in Stockbridge, Mass., for littering after the local landfill was closed. Rather than let the event derail his life, he turned the experience into an 18-minute satirical opus that has become a Turkey Day tradition known as “Alice’s Restaurant Massacree.” He put in a memorable set at the Woodstock Music and Arts Festival, in the midst of Vietnam War protests and political tension. Throughout his career, his songs have defined the counter culture and yet have been accepted and cherished by everyone from politicians to the state of Massachusetts, which named his song of the same name as their official state folk song.

At 70, it’s safe to say Arlo Guthrie has lived a life that embodies what his family name has come to represent. His late father, the legendary Woody Guthrie, will forever be regarded as the father of folk protest music; and to this day, Arlo continues the Guthrie family legacy by performing both his and his father’s music, while bringing his own children (including daughter Sarah Lee and son Abe) on the road with him for most of the year. His current tour finds him landing in nearly every corner of this great land for what are sure to be memorable nights of stories and songs that have defined a generation. Recently, Ryan O’Malley had the opportunity to catch up with Guthrie to talk about his landmark career and what he feels about his family name in 2017.

Ryan O’Malley : How do you feel about touring at this stage in your career? It seems you lean toward smaller tours with dates that are spread out nicely.

Arlo Guthrie: The days of flying to cities, renting cars, doing gigs, and flying home or to the next gig are long gone. We bought our first tour bus in 1976 and have been traveling that way (for the most part) ever since. When we first got a bus, it was a novelty for folksingers. No one really did that. Now everyone at my level of touring is doing it that way. We’re still on the road for about nine months a year. But, I had to take less gigs in a row. We used to do four or more in a row. Now there’s never any more than three. Things like that are what make continuously touring possible.

Ryan O’Malley : When you put together a set list, where do you find yourself drawing from the most? Songs people want to hear you sing, songs you want to play, songs honoring your father?

AG: For any given tour, the setlist will pretty much be the same. We figure it out before we start, then modify it during the first few weeks. Then it settles into whatever it is until the tour ends. Then we start all over again. Each tour has a theme so we base the setlist on that, so people know what to expect at any given show.

Ryan O’Malley : Your family has always played a vital role in your music, including your son Abe and grandson Krishna taking part in tours. What do you hope to see your children and grandchildren do when it comes to their own musical careers?

AG: You’re right. All of my kids and grandkids have some history of going out on the road with me. At first, it was simply to let them become a part of what I was doing. Over the years, they’ve shown different degrees of interest in doing something similar. I’m just happy that playing music has become a part of their lives, whether they do it professionally or not.

Ryan O’Malley : Do you feel like in the future the Guthrie name will be forever synonymous with the folk and protest scene? For example, if a grandchild would start up a speed metal band or something along those lines, do you think there would be any kind of reservations from a record label or the public in accepting something other than what they’re used to from the Guthrie family?

AG: Nothing is forever, so we just do what we know now. My kids and grandkids have all played the kind of music that interested them personally – including speed metal, traditional and jazz. It’s all music. When they’re with me, we do my kind of stuff. When they’re on their own, they do their kind of stuff. There’s an audience for everything.

Ryan O’Malley : One of your most recognizable traits is your willingness to be vocal when it comes to the political landscape surrounding you. That being said, what do you feel about the world and country you live in in 2017?

AG: Well, we are not living in boring times. I have loved being a part of the everyday world we live in, and I still do. I’ve always had an anti-authoritarian trait running through my songs and my stage performances. It has come in very handy recently.

Ryan O’Malley : When it’s time for you to retire from the business, what do you want to be remembered for?

AG: There’s no such thing as retiring in the world of folk music. This is a die with your boots on profession.

Ryan O’Malley : Lastly, how would you best describe the show you are doing on this tour and what’s in store for the people who come to see you here on this tour?

AG: This tour is very low key – no light shows, no big staging, no big band. It’s just us swapping stories and songs and generally just having some down-home fun together. We get to accompany each other in real time. It’s mostly me and Sarah Lee doing the leads while Abe and our friend Terry back us up (being the band). You’ll hear some songs from my father, myself and Sarah Lee as well as some by Pete Seeger and family friends. There’s a song by Phil Ochs, some Bob Dylan, etc. That can change from night to night, but it’s usually something like that. Prepare to be happy.   https://youtu.be/MUa7_T7heNo