Story and photo by Dan Rainone

Being a musician trying to claw your way to fame these days is like climbing a crumbling staircase on a pogo stick.

However, one of the best aspects of pushing yourself in this industry is being given the chance to meet and perform with some of your heroes. Some of the most humbling moments of your life will be hearing people you looked up to as a kid tell you they enjoyed something you created. I’ve been lucky enough to experience it a few times, and today I’ll be recollecting my experience of sharing the stage with the wonderful Stick Men at The Saint in Asbury Park, NJ last month.

The story really starts on July 9, 2017, when No More Pain singer/guitarist Mike Roman and I were sitting in the back row of the upper balcony at Red Bank’s Count Basie Theater, waiting for King Crimson to start their performance. Mike checked his phone, leaned over to me, and said, “By the way, just confirmed, August 13 we’re opening for Stick Men.” I threw several victory punches in the air, and for the rest of the night we grinningly watched Stick Men members Tony Levin and Pat Mastelotto join the 8-headed Crimson in a perfect career-encompassing onslaught while resembling the size of pencil erasers from the back of the room.

Fast forward a little over a month, and there I was sitting at a djembe a couple inches in front of Mastelotto’s drum kit. Stick Men had requested an acoustic act as an opener so they could set up their plethora of pedals, amps, computers, flux capacitors, etc., and leave it onstage after their soundcheck. Their setup as a three-piece is more busy with gear than I’ve seen with seven-piece bands. Finding a space to put down just a chair proved difficult when tucked into stickist Markus Reuter’s side of the stage.

Once settled in, it was all I could do to hold myself back from playing with every strange toy I saw lined up in front of me. Gear nerd heaven. No More Pain played as a trio this evening, with me on djembe, Mike Roman on acoustic guitar and vocals, and a good friend Ray Suhy on second guitar (also a member of Six Feet Under and Cannabis Corpse). As we cramped into the little available space on stage, Mastelotto came up and laughed when he saw my djembe, saying, “I was afraid when I heard there was a drummer in the opening band. I thought you were gonna have to set up a kit in the crowd.” Throughout our soundcheck he was on- and offstage, squeezing himself behind his drumkit to make minor adjustments, all while we cracked jokes and discussed gear.

The show started, and we were presented to what I would consider my favorite kind of audience: unfamiliar prog nerds. I’d estimate less than half the crowd knew who No More Pain was, but I knew if we played well, they would listen. Those relentless judging eyes as they review our chord changes and count the time signatures is my favorite form of social awkwardness. I know, because I’m one of them. Even if they absolutely hate it, I respect anyone that actually listens to the music.

We weaved through our set of new and old songs, starting with the slow and simple, and ending on the fast and complex. Starting at the guitar solo of the first song, the crowd left their personal conversations and became very attentive. It’s always a great feeling getting a good applause after playing in front of a new crowd, and it only grew louder throughout the show. Ending with our two most intense songs “Binary Annihilation Glitch” and “Bleed,” both very much unfit for an acoustic interpretation, I’d say we won the crowd over. The request for an encore was unfortunately denied because we hadn’t time that week to rehearse our acoustic cover of King Crimson’s “Frame By Frame” (which we have done in the past). Next time. Still, walking off stage we were met with an enthusiastic crowd shaking our hands, women complimenting my Focus Moving Waves shirt (that’s a first), and we sent a few handfuls of CDs off to some loving new homes.

After a drummer’s wet dream of loading gear into a car (one djembe, nothing else), I got myself a beer and the hidden anxiety of the night flew away as Stick Men took the stage. It was my first time seeing them (the closest was the Stick Men/Adrian Belew Power Trio combination known as The Crimson ProjeKCt in the summer of 2012), and it was just as solid as I expected. The musicianship was spot-on, with Levin supplying the low end in a tone that was both pounding and incredibly clean, Reuter nonchalantly attacking the neck of his Touch Guitar with both hands with ridiculous precision, and Mastelotto being the glue to the madness, keeping solid grooves to bring sense to the complex arrangements. They played mostly their own songs, along with a couple King Crimson classics, and lots of humor to lock it all together. They were very thankful for the crowd being there, and left the stage promising a free meet and greet at the merch table. I have endless respect for artists that do that for their fans, especially at this point in their careers. As they walked offstage and pushed their way through the crowd to get backstage, Tony Levin stopped when he saw me and the band. Still holding his Chapman Stick, he extended his hand out to us and said, “You guys were great.” Now, I know it’s only four words, but my inner 13-year-old started throwing invisible victory punches in the air. I may have done a few visible ones after he walked backstage. I spent so many years listening to and watching his unique playing in so many inspirational bands, and he complimented me before I had a chance to compliment him. Mission accomplished.

We also did a quick exchange of handshakes and compliments with Reuter and Mastelotto, but fans gathered around quickly, and I figured paying customers deserved their time much more than we did. We unfortunately didn’t get to talk further, as they didn’t get to breathe until they let every last person get an autograph or a picture. Looking back, I should have been THAT guy, making Tony sign my Liquid Tension Experiment and ’80s Crimson vinyl collection. A missed retirement fund opportunity. Eager to get to their hotel, the band quickly hopped in their van at the first sight of a cleared room and waved to us with thumbs up as they drove off through the questionable streets of Asbury Park.

Now did opening for these high-caliber musicians help push us into stardom? Probably not. We made some new fans and made a few bucks, but we’re still hopping on that same pogo stick, maybe an extra step up, but we know that staircase can come crashing down at any moment. Or maybe we’ll lose our balance and fall back down. Some even lose their balance and fall up. Who knows? Metaphors are stupid. All I know is pogo sticks are fun, and I hope every clawing musician gets a chance to perform in front of one of their idols at least once in their career. It gives you both a sense of accomplishment and the inspiration to keep going. May we all let our inner 13-year-old throw victory punches in the air. Amen.

No More Pain can be found at: 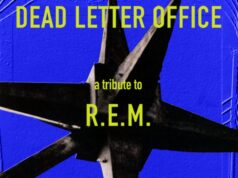