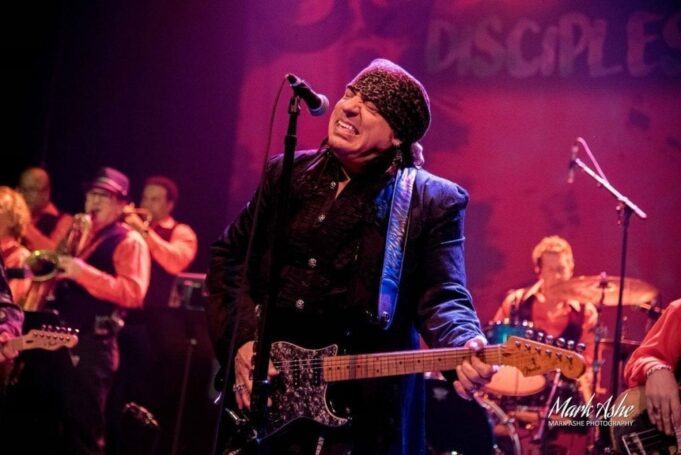 It was a warm homecoming for Jersey native, Steven Van Zandt, at New York City’s Gramercy Theater for the Little Steven and the Disciples of Soul show. Van Zandt has lived in New York for several decades and it seemed like he knew everyone there. Although Steve Van Zandt is probably best know as Bruce Springsteen’s sideman from the E Street Band his resume is huge and includes musician, songwriter, producer, actor and member of the Rock and Roll Hall of Fame.

Little Steven and the Disciples of Soul played for nearly 2.5 hours to a raucous sold out crowd in the intimate venue. They are Rock and Soul at it’s best. The Disciples of Soul consists of 14 members, 15 if you include Van Zant. Van Zant and Marc Ribler on guitar, Charley Drayton on drums, Jak Daley on bass, Everett Bradley on Percussion, Lowell “Banana” Levinger on piano and Mandolin, Andy Bruton on Organ, five horn players and three backup singers.

The band for the most part had bright red shirts with vests. Van Zandt and a few others had ruffled shirts all fitting the soul motif. The band was on fire virtually playing or dancing the entire show. The best part of a Little Steven show is that it brings the studio album to life.

There  is much more freedom and room for improvisations live that can’t be captured or repeated on a recording. Van Zandt is touring to promote his latest release Soulfire which is mostly reworked songs other artists have recorded that Van Zandt has given each song new dimension by adding a rock and soul touch. Little Steven comes on stage wearing a Disciples of Soul, circa 1982, leather coat and the band rips into the title song Soulfire. Then segues right into another Soulfire song, I’m Coming Back and next Among The Believers, off of Voice of America, Van Zandt’s second album. Van Zandt and the band slow it down a bit for Blues Is My Business, the landmark Etta James song that is also featured on Soulfire. This showcased some great extended horn solos and dazzling guitar work by Ribler.

Next up was Love on the Wrong Side of Town, the Southside Johnny song co-­‐written by Springsteen and Van Zandt. Van Zandt points to a girl in the audience and says “Bruce Springsteen and I wrote this back in the day, I wrote it before you mother was born.” The song was released in 1977, but it still holds up on record and in concert.

Two songs from Little Steven’s classic album Men Without Women included, Until The Good Is Gone and Angel Eyes, didn’t disappoint. Back to Soulfire for I Saw The Light and Standing In The Line of Fire. Standing In The Line of Fire Is a tribute to Spaghetti Western music writers. Van Zandt co-­‐wrote it with Gary U.S. Bonds, which was the title track to Bonds’ 1984 album. St. Valentine’s Day was performed in a rockin’ soulful way by The Disciples of Soul.

There’s a full-­‐tilt version that was from the David Chase movie Not Fade Away by a fictional band called The Twylight Zones, which this reviewer prefers. Salvation is a cool rocker with some wicked guitar work by Ribler. The City Weeps Tonight again brings on the soul with a doo-­‐wop type song.

Down and Out in New York City brought out the horns again for extended solos. Eddie Manion, Stan Harrison, Clark Gayton, Ravi Best and Ron Tooley, each gave strong interpretations of the song based on the type of horn and flute they were playing. It got everyone moving on stage. Princess of Little Italy, has to be one of the highlights of the show. Van Zandt sang the best here with moving vocals to this 35 year-­‐old song. Lowell “Banana” Levinger (a founding member of The Youngbloods) stepped out from the piano to play the Mandolin. Solidarity, Leonard Peltier and I Am A Patriot could be considered the political part of the show and were sung back to back to back.

Next up was Groovin’ Is Easy, The Electric Flag song from 1968, that Van Zandt makes totally his own. Ride The Night Away is a Van Zandt and Jimmy Barnes penned song from some 30 years ago that has become a great addition to the show, especially since Little Steven and the Disciples of Soul hasn’t recorded the song. Bitter Fruit and the fantastic Forever round out the set.

The band played two songs for their encore. One of the most famous Southside Johnny and the Jukes songs, I Don’t Want To Go Home and finally Out of the Darkness off of Voice of America. Little Steven and the Disciples of Soul continue their US leg of their tour throughout October, then head to Europe in November and December.

Tickets can be found at http://littlesteven.com

Set List Soulfire I’m Coming Back Among The Believers Blues Is My Business Love On The Wrong Side Until The Good Is Gone Angel Eyes I Saw The Light Standing In The Line of Fire St. Valentine’s Day Salvation The City Weeps Tonight Down And Out In NYC Princess Of Little Italy Solidarity Leonard Peltier I Am A Patriot Groovin’ Is Easy Ride The Night Away Bitter Fruit Forever Encore: I Don’t Want To Go Home Out Of The Darkness