Joe Russo’s Almost Dead had a welcome home party of sorts last Saturday night. Coming back to The Capitol Theatre for the first time since their New Year’s Eve run there, the band threw down a terrific show, even in the context of their lofty standards established over the last few years. JRAD’s popularity has been swelling even more of late, as evidenced by their recent show in Colorado, where they filled the 7,500-seat 1st Bank Center. The band’s high-energy, improvisational jams repeatedly generate an enthusiasm in its audiences that is noteworthy even among all of the touring jambands with currently mega-dedicated fanbases. The band celebrated its 100th show at The Brooklyn Bowl in March of this year, and have only played approximate 20 shows so far in 2017. In 2016 the band played less than 40 concerts.
And, since the band plays most of its shows on the east coast, fans like Judy Goldberg travel across the country for a rare opportunity to see them perform. “These guys hit the west coast so rarely that I gotta fly in to see them,” says Goldberg. It makes sense then that at these past two Capitol Theatre shows, lines starting forming outside the venue on the morning of, with fans trying to get a coveted spot on the rail. As with many bands, most fans have a preferred position–either to the right, left or center of the stage, and you are likely to see many of the same faces at most shows regardless of where the band is playing. 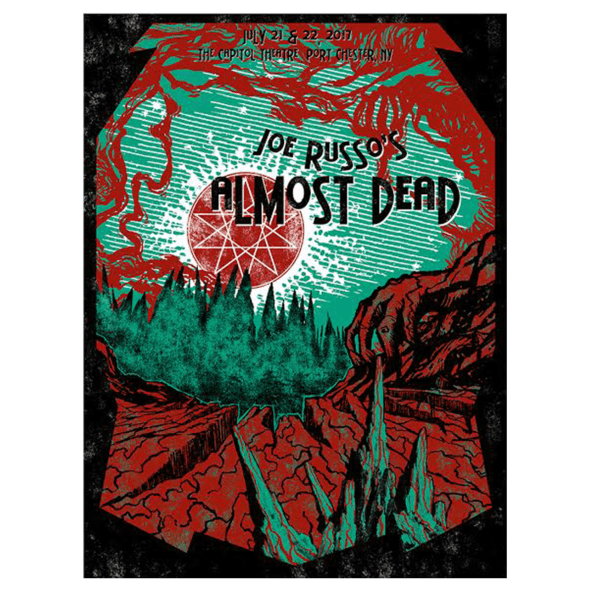 For Grateful Dead fans, these songs are all familiar, and for most people in attendance, they have been heard many, if not hundreds, of times. “This is music that has been woven into our subconscious for years,” says fan Andrea Caplan. People are always learning what longtime JRAD fans have known since the band started playing together in 2013: that although they play mostly Grateful Dead material, they are much more than a cover or tribute band.
The second night of their two-night run at the Capitol Theater was special for several reasons, and you could feel it in the audience. Fans came prepared to celebrate Marco Benevento’s birthday with handmade Marco masks. Many were dressed in white clothing, or other digs similar to Marco’s colorful concert attire.
Of course, the center of the bands energy comes from Joe Russo, whose drumming usually drives the band at a remarkably high tempo. On this night, Russo’s pace was even higher and more frantic than usual. Head constantly in motion along with his arms, tongue often protruding, Joe set the pace with the opening instrumental “King Solomon’s Marbles,” which lead into “Cumberland Blues,” “I Need a Miracle,” and “Crazy Fingers.”  The first set reached a peak with “St. Stephen,” one of the Grateful Dead’s most beloved and energetic songs.
They closed the first set with the amazing debut of the Benevento/Russo original instrumental “Play Pause Stop.” Then, following this surreal surprise came another, when the band brought a birthday cake on stage for Benevento to enjoy while the the entire Cap crowd sang a jubilant “Happy Birthday.” The keyboardist was also presented with a huge birthday card, made from a keyboard-styled mural painted by veteran dead fan, Sam Hirsch.
For the second set opener, guitarist Scott Metzger sang some great lead vocals on a debut cover of Bob Dylan’s “Silvio.” The band followed this up with the crowd-pleasing segment of “Scarlet Begonias,” “Cassidy,” “Fire On the Mountain,” and finally into “Lost Sailor” and “Saint of Circumstance.” Right before JRAD launched into the encore of Warren Zevon’s “Werewolves of London,” Benevento addressed the crowd to say how much fun was had on this night.
From the video channel of Sean Roche.
A lot of fans, like Sam Hirsch, have been inspired to create their own art in tribute to the band. With JRAD’s blessing, superfan John Pullekines from Philadelphia has created a commemorative book that includes photos and setlists from the first 100 shows. The book, which is not for sale, contains photos from budding photographers–in most cases, fans of the band who are not professionals but have taken up photography as a result of their passion for JRAD. John also distributes JRAD-Base, a database which contains extensive set lists and statistics. Hand made shirts, jewelry, pins, and stickers are given out to friends and to the most loyal fans.
Yet, many fans of the band are conflicted by the band’s growing popularity.
“Selfishly I don’t want them to get any bigger,” says JRAD mega fan Kim Noerager. “But, they’re so amazing, that it’s bound to happen. Like that wonderful secret diner that gets written up and suddenly you can’t get in anymore.” It’s unclear how big Joe Russo’s Almost Dead will get or how long they will survive, but for now fans young and old are enjoying the ride.
To submit a review or story for consideration hit us at [email protected]
Check out the Live Music News and Review.com Facebook page for updates and announcements.