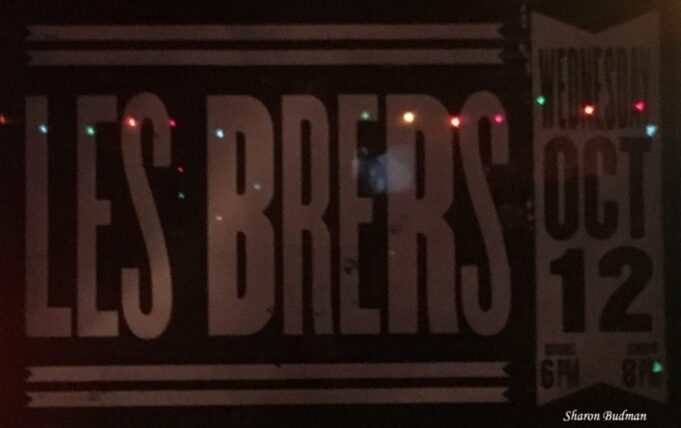 “Les Brers in A Minor,” is the first of two lengthy instrumentals on the Allman Brothers Band 1973 epic Eat a Peach; the other being the colossal “Mountain Jam.”  A third, the shorter, almost lullaby “Little Martha,” became somewhat of the “outro” music after the Brothers’ shows to honor namesake Duane Allman.  But it was those long works, and many others, which allowed the Brothers to stretch out musically, far from the potential confine of words.  Not that they didn’t write some beauties along the way – think “Blue Sky” and “Melissa” – but as one of the originators of the jam band genre, their word-less songs were things not necessarily forced into strict lyrical structures.

Soon after the final October 2014 shows of the Allman Brothers, Butch Trucks, no doubt already feeling restless, summoned some of his old friends to see if they might be interested in carrying the musical torch, as it were.  Trucks enlisted fellow drummer Jai Johanny Johanson (aka Jaimoe), percussionist Marc Quiñones, bass player and now Dead-alumnus Oteil Burbridge, along with guitarists Pat Bergeson and Jack Pearson (who played with the Brothers in the late 90’s), keyboardist Bruce Katz (Gregg Allman Band) and vocalist Lamar Williams Jr. (who’s dad, Lamar Sr., played bass with the Brothers beginning in 1972, upon the passing of Berry Oakley).

In a nod to the past glory of the Allman Brothers, the band went with the moniker “Les Brers.”  As Trucks would explain during band introductions, it’s kind of like “The French Redneck Brothers.”  The band, on a short northeast tour, stopped by the Brooklyn Bowl in Williamsburg on Wednesday, October 12, for a two plus hour set.  Opening up for Les Brers was the southern-tinged Greg Humphreys Electric Trio.

Les Brers got underway with the instrumental “Hot ‘Lanta” and there was no turning back.  Williams then kicked off a night of vocal prowess with “Stand Back” and “Trouble No More” – which was the first and last song the Allman Brothers ever performed.  Williams mixes just the right amounts of rock, country and soul, bringing the Brothers’ sound up-to-date.

From the youtube channel of Rock, Roots and Blues – Live

The Dickey Betts’ classic “Blue Sky” sounded as fresh as ever, with Pearson and Bergeson facing each other – as they would most of the night – almost pushing each other as if to say “what else ya got?”  At stage left was one real happy Burbridge, swaying in and out with every bass lick he played.  Almost out of character from the hard-driving multiple guitar and percussion based sound of the Allman Brothers, “Please Call Home,” demonstrated that the band could take it down some and sing with a sense of heartfelt longing:

“Take one last look before you leave

‘Cause oh, somehow it means so much to me

And if you ever need me, you know just where I’ll be

So please call home, if you change your mind

“Every Hungry Woman,” from the Brothers’ debut album led to the slightly obscure “I Can Fix It,” with Pearson on vocals and Bergeson on harmonica.  Proving what goes around comes around, it was only appropriate that Williams sang “Come and Go Blues,” the third track from Brothers and Sisters, and the first to feature his dad on bass.  The bluesy, “Don’t Keep Me Wonderin'” from Idlewild South, kept the crowd bobbing up and down at the edge of the stage.  The 600-person capacity Brooklyn Bowl gets fans up close and personal – one only needs to politely squeeze their way to the front.

With Jaimoe taking a break, Quiñones moved from his percussionist array and took over on drums while Katz led the group into one of his own compositions, “Just An Expression.”  Really giving his Hammond B-3 a workout, this instrumental sounds at the same time new and different, but with a lineage back to 1969 and the Brothers’ well-worn legacy.

For this evening’s performance, the band welcomed to the stage the super-talented Scott Sharrard, to share guitar work with Bergeson and Pearson.  With Williams handling the vocals, the three guitarists took turns soloing on “Dreams.”  Sharrard stayed for one more, and with Bergeson again on harmonica, Pearson launched into “Hold What You Got,” a song he co-wrote with William Howse years ago. As if getting to see this new incarnation of the Brothers wasn’t enough, adding “new-old” songs like this to their repertoire kept the whole thing current.

Note that Sharrard plays guitar with, and is Gregg Allman’s musical director – this appearance was what you might have called a little warm-up for his “Songs of Love” charity event the following week which was to feature 2 sets of music honoring Duane Allman and the Allman Brothers.

As the night wore on, there was anticipation building that other classics were waiting in the wings – enter the low-grade rumble

and the opening bass lines that could only be “Whippin’ Post.”  If any one song defined the Brothers, and if Les Brers were to pick up where they left off, this was it:

As they got deeper and deeper in, the beat slowed down, and “Post” morphed into “Mountain Jam.”  They played enough of this to make the children happy and then went back to where they started, faster than before. The band encored with a fine rendition of “Southbound.”  All in all, a great show but not nearly long enough – after all, this is some of the finest music, southern or otherwise, ever recorded – or played!

So back to the stretching out concept – perhaps Les Brers was formed with the intent to stretch out – to see what these former and current “brothers” could do, without the watchful eye of an Allman, but clearly with his living spirit intact.  With the core-four sonic foundation of Trucks, Jaimoe, Quiñones and Burbridge, whose combined playing was as strong as it was in 2014, it would be hard not to compare the then and now.  Regardless, the band, and their name, fit together quite nicely – and quite possibly, the road will go on forever.