Another September and another Wormtown.  I found myself home again and was happy to be among friends and family.

Thursday night had a rocking cabin schedule for early birds with Adam Ezra Group followed by Bella’s Bartok in the uphill cabin, and Gratefully Yours handling a full night in the other cabin.  While I wasn’t there I hard that Bella’s Bartok was so hot, with crowd surfing and mayhem that the fire alarms went off as they were finishing up near to 2 AM.

Friday morning dawned bright and early and I quickly made it into the festival with no traffic at all at about 9 AM.  I went straight to the stage as my band rice – An American band was assembling.  This was our second appearance at Wormtown and our fourth Worm experience between Wormtown and Strangecreek festivals and I was able to greet the stage crew and recognized almost everyone.  The stage is among the biggest we get to perform on, and the sound system and team is simply amazing.  We fired up right on time and busted out a full 60 minute set.  My lovely wife served up Bloody Marys to an eager line and it was among the best times I’ve ever had on stage.

Because it is a conjoined stage there is really never a break in the music on the main stage. So as soon as rice was over, Headband fired up. They are a band that seems to feature members of Turkuaz and other regional bands doing compositional funk and jam and they sound great.

Our good friends Rebel Alliance took to the main stage directly after for the first time ever, and were clearly reveling in the spirit of it. Wormtown is great because bands can come back year after year and build an audience and a fanbase and you can watch them ascend musically and personally. Rebel Alliance is in the middle of doing that and their reggae infused jams rock you from stem to stern.

By mid afternoon I had my party on pretty good and the ranks were swelling. I caught the sweet sounds of amazing funk and vocals, rapped up in a New Orleans party. I had never seen them but had heard of West End Blend for quite some time and they blew me away. Female and male vocals alternate, horns blare, and the dancing commences without question. I’m going to keep my eyes on these guys, big time. Hailing from Hartford you would think that somehow they had been transplanted from Bourbon street via Cincinnati’s funky town and Memphis’ soul. They are on my to see list again for sure.

West End Blend select cuts, sorry but the starts and stops aren’t exactly perfect- we’ve posted all that we have.

Riders on the Storm were next on the main stage, paying tribute to the Doors with a classic sound. I had seen them at Camp Creek this year, but the performance this afternoon at Wormtown was far superior. The band sounds very much like the Doors, and by the middle of the show lead singer Eamon was channeling Jim Morrison from his artistic flair to his smoky vocals to the leather pants he was wearing. 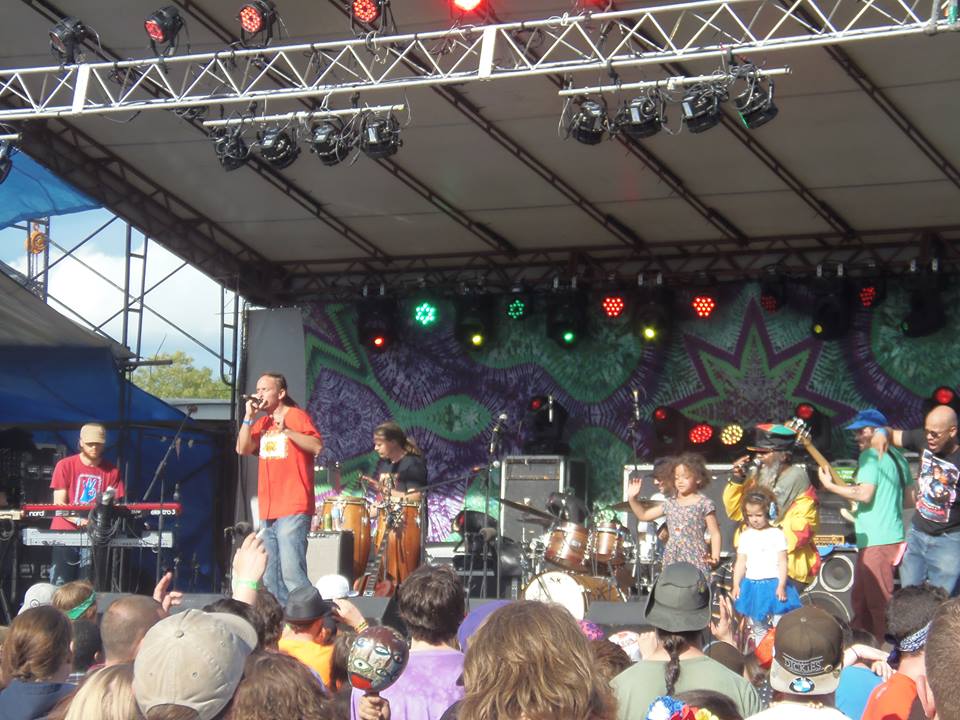 It would be safe to call the Alchemystics the house band of Wormtown- I think that any time I’ve been to the event they have been there. Though the years have been tough on them at times, they always return to Wormtown with strength and power, lending their message and music to the whole community. This time was no exception. It was great to see Ras Jahn on stage after an extensive absence, and he was joined by the Ilana who has been doing a lot of the singing in his absence and was his singing side kick before. The band was on all cylinders running through their hits as well as some material that I had not heard either because it was vintage or was new to what they were doing. Dan Thomas joined them on stage on guitar and Ilana fired through a medley that included Aretha Franklin’s You Make Me Feel and Michael Jackson’s I Want you Back into another pop tune I didn’t recognize. In the heat of the day the band managed to keep their fire while supplying cooling jams.

After enjoying a fine dinner at our booth (Old 78 Clothing down by the fire, where you can get the finest fashions, plus tie dye, Gallery on da Go, etc) I wandered down to Riverworm for the first time in the weekend. My buddy Ras Spective (of Rhythm Inc and having done many years in the Alchemystics and Truefire Recording studio near Amherst) asked me to come down and check them out. The band is flat out the best Bob Marley tribute I’ve ever seen and they covered material from throughout Marley’s career. The lead singer is amazing, and is flanked by a great lady vocalist, plus keys, rhythm guitar, lead guitar, and drums. They are definitely worth checking out.

I took a break for a while and hung out with friends and had a few beverages. I then walked back through the woods back to the Riverworm stage to catch the final band of the night there, Outer Stylie. This group of local guys took the stage like they were riding a shark into a keg party. The band is a hard rock band with jamming sensibilities that have more in common with Black Sabbath than they have with the Dead or Phish. Two guitars, drums, bass with Nate Martel taking the front position on vocals. Tom Schack holds it down on the bass and looks like the most loving Wookie you’ve ever seen- and I don’t mean festival wookie, I mean literal wookie. John Duffy holds down guitar and Monte Arnstam holds down the drums. Monte is a force of nature and his playing is incredibly entertaining and energetic. The band as a whole was awesome and a great change from the parade of like minded jam bands who populate many festivals. They are putting out hard driving rocking tunes and aren’t afraid to whip it out and shake it around, that’s for sure. They had a trumpet player sit in for the second half of the set which was a fun addition to their set.

I quickly scooted my way back to the main stage but caught only the last couple of minutes of George Porter Jr and his Runnin Pardners. A mainstay of the New Orleans sound and the national festival scene, Porter made a name for himself in the Meters. While they continue to reunite for special gigs here and there, the Runnin Pardners seems to be his main outlet. You could also here his influence throughout the weekend as other bands picked up on the NOLA vibe and injected it into their sets.

We have much more en route for you, check back often and we will continue to post as we find more video and mix more audio that we recorded just for you.

Hayley Jayne and the Primates by Gerry Desrosiers

The Last Waltz by Gerry Desrosiers