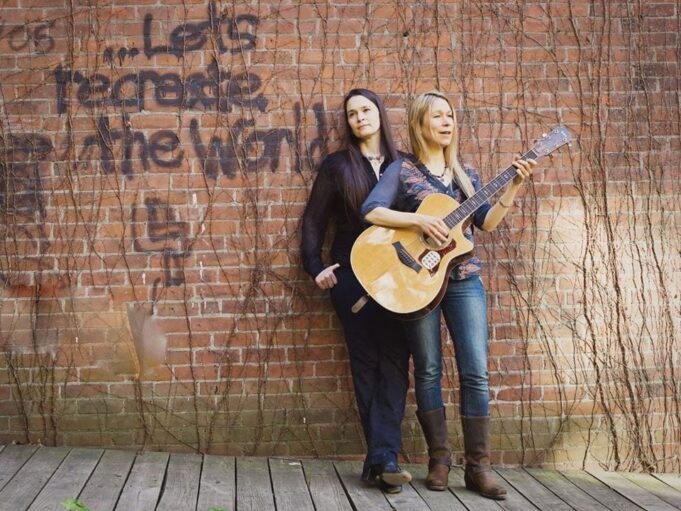 The Nields were my favorite band when I was in high school.  The band’s former guitarist and ex-husband of singer/guitarist Nerissa Nields, was my drama teacher at the CT prep school Loomis Chaffee.  So the band was not only a popular regional band, but it had closer ties to my friends and I, as we saw them hanging out in the school theater as we practiced The King and I.   Consequently, when I was lucky enough to have a chance to sit down with the two “Nields”-  sisters Katryna and Nerissa Nields- before this show in the weird little green room in the basement of the Iron Horse to ask them a few burning questions I’ve had for years, I was needless to say pretty excited, and a bit nervous.

I had been wondering: How did being at Loomis affect the band’s development?

“It was one of the most serendipitous things that could ever have happened,” Nerissa explained.  She was married to David Nields, who got a job at Loomis just as Katryna was leaving Trinity College in Hartford, CT.  They were trying to figure out how to start the band and the plan was, wherever David got the job, there they would start the band, with the options being Sedona, Dallas, Washington DC, or 10 min out of Hartford, where they already were.   Says Nerissa, “What we didn’t realize was it was the absolutely perfect cradle to start a band.”  They lived in the dorms, tried out their songs, and their outfits, on the girls they lived with.  I asked how being around the student affected 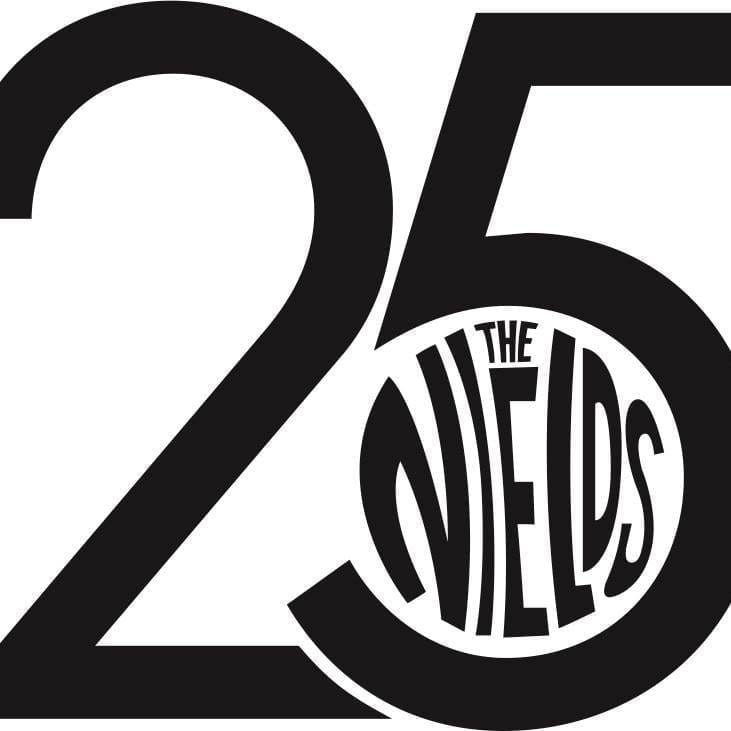 their songwriting, to which Katryna responded: “being around teenagers kept us grounded in that youthful transition period.”  The band lived at the school from 1991-1995 and evidently wrote everything from Abagail, Bob on the Ceiling and Gotta Get over Great while at Loomis.  I hadn’t known the extent to which the fertile intellectual cradle that nurtured my youth also nurtured my favorite band.

This show celebrated The Nields’ 25th Anniversary, quite the accomplishment I must say.  They marked the occasion with 2 nights at the Iron Horse in Northampton, MA, and split up the nights by focusing on 2 different spans of time in their musical careers.  The night I went to, the first night, focused on “the band years” or 1991-2001.  I asked how these “band years,” and the years at Loomis, the early years, affected their later songwriting.  Nerissa responded:

“I loved those Loomis years and I remember being very conscious of loving them. Like, how can life get better? We definitely had a dream to get famous, but I remember thinking that everything is perfect here, but yet part of the perfection is that we’re leaving. We can’t stay here forever, and it wouldn’t have been good to. I think of it as a cradle. We were in this cradle of this incredibly supportive community, intellectually stimulating community, centrally located, and yet we had this dream.” In 2001 Nerissa’s marriage ended, which she said “certainly that affected my songwriting” as she mentioned how Love and China was basically a brake-up album. “I think I learned so much from that marriage and I learned so much from that divorce. I generally have a philosophy on that whole catastrophe that life is kind of about taking the things that happen to you and making something else out of them, be it art or something else.”

I left my very brief interview (I didn’t want to take too much of their time pre-show) with a deeper understanding and appreciation for the music I had come of age with. These two women are amazing songwriters.  Their writing touched me with lyrics that seemed to know what my teenage mind was thinking, perhaps exactly because they were a part of the same experience I was a part of.  We were products of the same environment, albeit in very different ways.

I was glad I got to come to “the band years” night because sometimes you need the comfort, and the uplifting effect, that the songs of your youth can bring to your spirit.  What I was unprepared for was how much this concert was 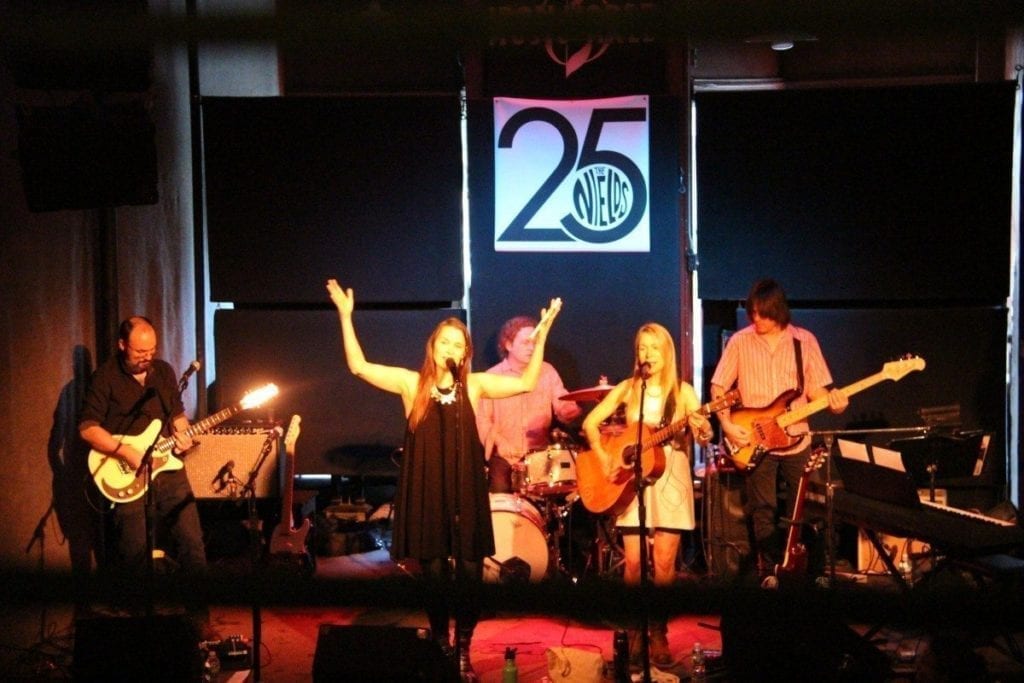 going to reacquaint me with a musical genre that I haven’t really listened to in a long while.  I didn’t realize, either, that I would know the lyrics to at least half the songs, as I found myself singing along almost unconsciously.

They started the show with a resounding version of James. I’ve always loved this song, especially, of course, the line “they remind me of my friends from high school/They’re all so spineless.”   After James, they went into Jeremy Newborn Street and then Be Bice to Me.  A highlight of the show for me was when they sang the Sinead O’Connor classic Black Boys on Mopeds, which was always a favorite of mine off their 1994 album Bob on the Ceiling.  They really did a show-stopping, haunting rendition of the song- the room was silent in rapt attention.

The next song, Snowman, reminded me of how I’ve always had a hard time pinpointing the exact quality of Katryna Nields’ voice. It’s striking to say the least.  Aching at times. But when paired with her sister’s voice in poignant, piercing harmonies, it doesn’t make for those “pretty” kinds of harmonies, but something far richer.  They are full of honest, open personality, devoid of guile and with a tinge of humor and a dose of humility.

I really enjoyed Georgia O, but I gotta say I really felt like dancing! This has got to be the first time I’ve ever been to a Nields concert where the whole room wasn’t dancing.  Not the place for it, I get that- more of a dinner crowd. But it was odd to me. I was bouncing in my seat to myself, though.

Alfred Hithcock was next.  What a funky tune, made even funkier by the Katryna’s “Que Sera” intro and deep- 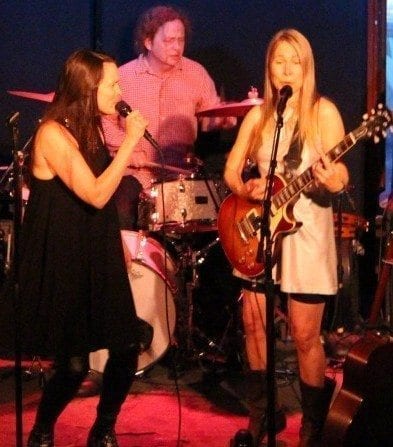 throated “4” in the countdown to the song’s start.  “Alfred Hitchcock what are you doing to our minds?/I get the feeling that you’re unkind/I read what you said/You wanna play with our heads.”  After finishing the song, the girls went into a pretty funny story about promoting the single Gotta Get Over Greta and how their label was worried about them singing a song with homosexual overtones in a Juniors section of a Midwest Bloomingdales (see Track # in full audio below for the full story).  That really characterized the entire show; thoroughly entertaining and playful banter permeated the night= that, and thoughtful poems about things like Nerissa’s conflicting feelings of being compared to a Barbie Doll.

I thoroughly enjoyed Taxi Girl and Jennifer Falling Down, as well as Hush Before the Heartbreak, though I wasn’t familiar with the latter.  Next, they went into two of my favorites, Christopher Columbus and Best Black Dress, and then into Writing it up in the Garden, 100 Names, and Keys to the Kingdom.

They ended with Tomorrowland and encored by bringing up Katryna’s daughter, who is in the youth group Kalliope Jones (I highly recommend checking them out-you can see my review of them opening for Antigone Rising here).  They sang their 1997 single Gotta Get over Greta.  Then, as a special encore, they came to the top of the stairs, right next to where I was sitting, and sang Easy People, saying they had never done a show without singing that song.

All in all it was not only a thoroughly satisfying walk down memory lane for me, but it reintroduced me to a band which I’m excited to get back into.

The Nields will be back at the Iron Horse on Saturday February 4th.

FULL AUDIO of the show from Archive.org: