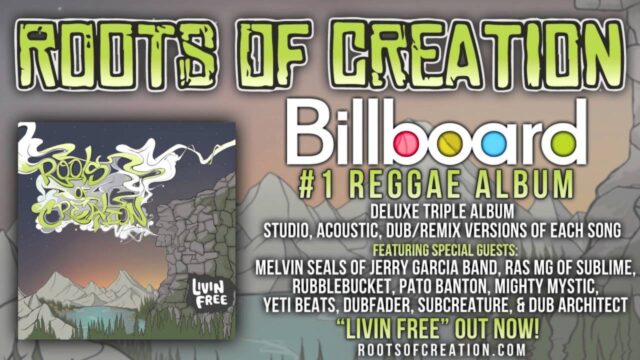 Billboard #1 for Roots of Creation

In an announcement on Facebook, Roots of Creation broke the news to fans, “LIVIN FREE (Deluxe) just debuted at #1 on the Billboard Reggae charts! PLUS The standard version hit #10. To all of our AMAZING friends who made this happen by pledging and purchasing LIVIN FREE … we thank you from the bottom of our hearts for your support!”

Roots of Creation is a band out of New Hampshire that  has been mixing modern reggae with roots reggae, dub, and jam for over a decade.  Having garnered regional awards including Best in New Hampshire at the New England Music Awards and Best Jam band at the Cider Magazine awards in the past, this latest achievement of getting the #1 reggae album on the Billboard charts marks a major step for the band.

“We had an amazing tour around the East coast, and it’s the culmination of a decade hitting the road, and all the amazing artists who guested on the album.  It was a really huge team effort.  We could easily thank a hundred people, easily, or more!”

Additionally the album has appeared in the top ten in its first week on Jambands radio charts, CMJ radio charts, and the Itunes reggae charts.  Fans can easily get the deluxe album, Livin Free here:

Roots of Creation having recently performed select dates on the “Spring Blackout 2016 Tour” with The Expendables, Passafire, and Tunnel Vision that had the band all over the northeast. Upcoming tour dates has the band playing festivals and clubs and there are rumors of an extensive national tour in the Fall.

“Livin Free,” a nod to the band’s home state of New Hampshire and its motto, “Live Free or Die,” marks their biggest endeavor yet. In addition to being an 18-track studio LP, “Livin Free” offers a 3-disc deluxe collection with both dub/remix and acoustic versions of 14 of the LP’s tracks in digital and CD formats. The CDs, as well as limited edition, hand-numbered (1/500), splatter/colored, double 12″ vinyl, will be available via Amazon and select retail stores on May 6th. Glide Magazine says of the album, “Roots of Creation incorporate all the gritty West Coast mix of reggae and rock, along with poignant lyrics that give the listeners a conscious groove.” “Livin Free” is also featured in Relix Magazine, The Pier, Top Shelf Reggae, Rootfire, WorldAReggae and more. The 18-track retail album premiered on Wednesday with JamBase, and can be heard here:

Whether on the festival circuit, performing at jam favorites like Gathering of The Vibes, Wakarusa and Closer to the Sun, or sharing the stage at sold out shows with some of their diverse influences including Slightly Stoopid, The Wailers, and Michael Franti, reggae/rock/dubtronica band Roots of Creation offer up a high-energy, infectious experience. Awarded “Favorite Jam Band” by Cider Magazine and “Best Band In New Hampshire” by the New England Music Awards, Roots of Creation mix their jam-reggae hybrid sound with homegrown roots, guitar-heavy rock, and Brett Wilson’s introspective and conscious laden lyrics.