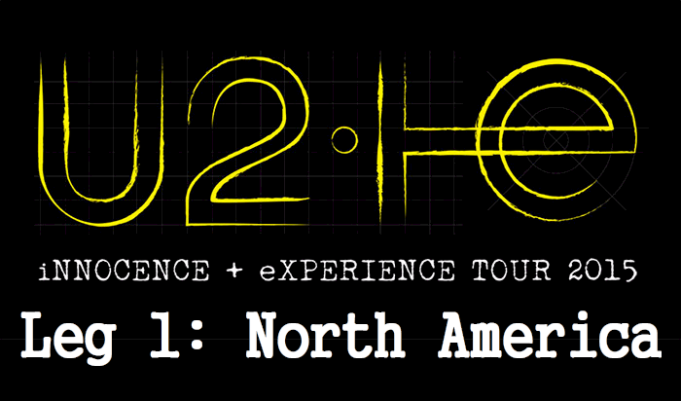 U2 finished the last of their five night run at Chicago’s United  Center on Thursday, July 2.   The crowd must have been aware that the band starts late, because the arena did not start to fill up until nearly an hour after the scheduled start time.  But the band was certainly worth the wait, opening their show with a rocking homage to one of their musical influences, “The Miracle (Of Joey Ramone).”  This was one of five songs performed from their latest album, “Songs Of Innocence.”  Nobody seemed to mind, as the new material is as thoughtful and full of energy as their older songs, quickly proven as the band immediately cranked out “Gloria” (complete with references to Van Morrison’s 60’s garage band hit, “Gloria.”)   The upbeat tempo continued through “Vertigo” and “I Will Follow”, as the band began to reveal more of their stage show:  a huge stage at one end of the floor, connected to a smaller stage at the opposite end, connected by a long ramp.  A scrim was often lowered over the ramp, becoming a screen for various videos and projected images. 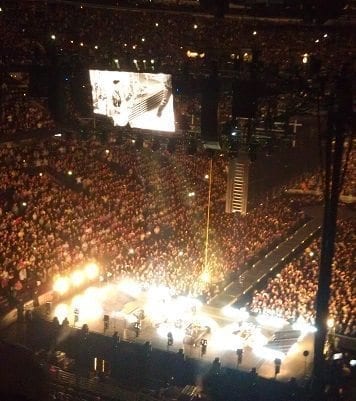 While the band started on the main stage, after the first four or five songs they began spreading out;  if the rhythm section of Larry Mullen, Jr. and Adam Clayton was holding court on the main stage, Bono and The Edge would be roaming the ramp.  At one point the entire quartet performed a short set on the smaller stage, and even then at least one player would continue walking the ramp between the stages.  With an extremely uncluttered P.A. system, the combined effect of all this movement, the ramp and various stages and several video screens featuring the band, was that there was not a bad seat in the house—everyone at some point had band members playing right to them, especially the general admission crowd packed into the floor area, and it was easy throughout the evening to stay connected with the musicians no matter where you sat.

Deftly mixing material from their last two albums with their classics,  U2 made it clear that their show was about more than just the joys of loud rock music.  Bono used “Sunday Bloody Sunday” to remind everyone that there was a time that the war between Ireland and Northern Ireland was thought to be a war with no end in sight.  Yet, the band suggested, if peace could come to Ireland, solutions could be found to end other civil wars.  The line, “How long must we sing this song?”, which once represented frustration over bloody violence in Ireland, was now an obligation;  U2 will continue to sing this song as a beacon of light to other nations and peoples struggling with conflict.  “Until The End Of The World” furthered the band’s apocalyptic warnings, making a deep impression with animated video accompaniment that turned this first set closer into an almost psychedelic blast of sensory overload.

This well-orchestrated performance included the set break.  Hidden beneath the lights and screens and effects, a video of Johnny Cash performing “The Wanderer” (produced and backed by U2) began to play, as the four band members disappeared for a ten minute break. Similarly, as a second video played, the band magically reappeared, slamming into the phase-shifting, midtempo dance rhythms of “Even Better Than The Real 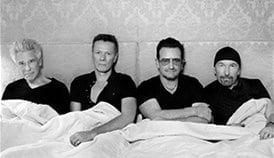 Thing.”  The crowd, previously mesmerized by the combination of atmospheric guitar and vocals, finally began to show its enthusiasm, loudly boogieing its way through “Mysterious Ways” (with one lucky young lady from Mississippi being brought onstage to dance with Bono).

This inertia was soon lost, however, as the band put together a two-song mini-set of acoustic ballads, which although beautiful and well-sung (Bono’s voice still has its youthful charm), did take some of the air out of the room.

Fortunately, the band saved the best for last. “Bullet The Blue Sky” was the perfect combination of motion-filled video, hammering rhythms, The Edge’s biting slide guitar, and Bono’s almost Jim Morrison-like recitations.  The guitar work throughout the evening could often be lost, as The Edge liberally employs reverb and digital delay in his palette of sounds, which sound large and stratospheric on recordings but can easily evaporate into the echoey reaches of a large indoor arena.  But “Bullet” was a power charge of energy and space, which brought the crowd to its feet.  And there we remained, as U2 played their greatest song, “Pride (In The Name Of Love).”  They may have performed this a thousand times, but Bono and the boys performed it as if it was written just for this moment.  The entire audience sang along, as they had been doing all evening.  Playing “Beautiful” and “Bad”, with Bono adding some of Frank Sinatra’s “My Kind Of Town (Chicago Is)”, and ending with “With Or Without You” showed the depth of U2’s catalogue. Very few bands have a repertoire with so many hits and yet are confident enough in their newest material to perform them in such a fulfilling manner.

Halfway through the encore Bono began listing many of the charities and organizations the band is involved with, as well as many of the corporate sponsors supporting these causes. He introduced chef Mario Batali from the crowd as such a supporter (coincidentally, I was in attendance at this concert with a friend who used to work alongside Batali at a pizza shop in New Brunswick, NJ), then played him a chorus and verse of Paul Simon’s “Mother and Child Reunion.”  That segued into the final song of the evening, “40”, which Bono dedicated to Jerry Garcia, whose former bandmates from the Grateful Dead were across town preparing for a three night run at Soldier Field.  “40” comes from Psalm 40 in the Bible, but the refrain, “How Long To Sing This Song”, while reflecting the question asked in “Sunday Bloody Sunday”, was also an opportunity for music fans to stand back and appreciate those rare rock musicians and songwriters who are continuing to make beautiful music with beautiful messages long after most rock bands have faded into oblivion.

Final encore from their final United Center show on the iNNOCENCE +