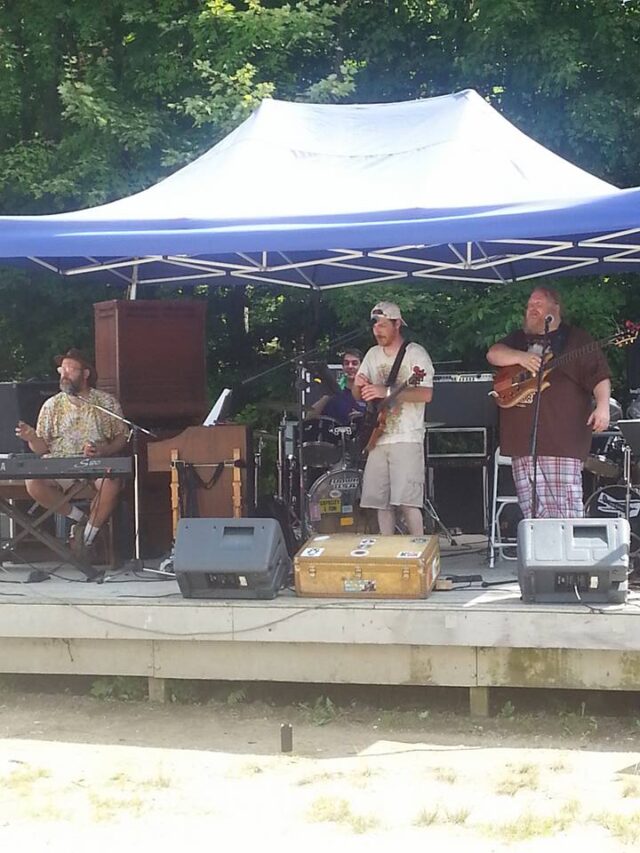 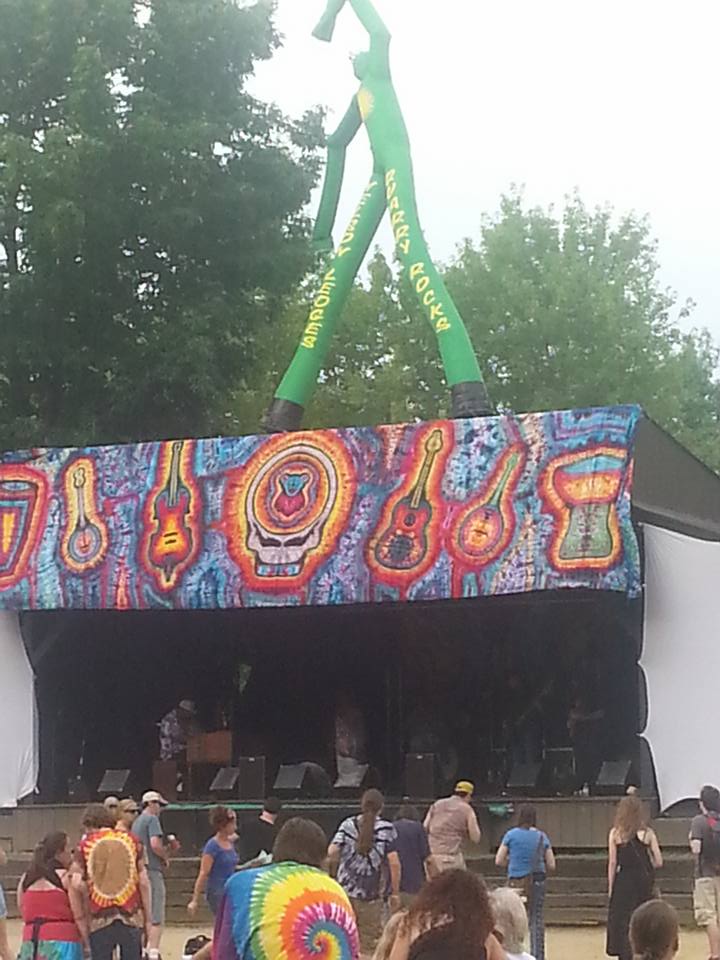 Check out the review of day one of Gratefulfest here.

The day dawned early for me, 8:15ish and I wandered around between the booth and the beach while folks were lining up for coffee.  I listened to some of the recordings from yesterday, and I’m stoked that my new Tascam DR50 seems simple enough that even I can run it.  Unexpected bonus about Nelson Ledges festivals?  There is a big lake and beach, so not only can you enjoy it, take a swim and cool off- but it inspires swimwear as the wardrobe choice of many.  The people watching is great!

At about 10 AM, the second stage came to life with a B3 combo- lead by guitarist Bob Niederitter.  It was the perfect vibe to start the day, musical but not cranially challenging for the early risers.  They fired through jazz standards for two sets, and were really quite good.

Up first on the main stage was Canadian jam band The Diesel Dogs.  Apparently their guitar player had some sort of medical calamity, and the guitarist from Dead Ahead Ohio sat in the entire set, improvising the songs and really helping out these guys who were in a bind.  Their songs ranged from jam to blues to even a little ska, and they were fun.  They clearly were having a great time playing.

Up next on the main stage was Adam’s Ale.  They played almost exclusively original material it seemed to me, which in this particular festival is remarkable by itself.  They took the chance and went for it, and didn’t look back.  The crowd had started to accumulate and were dancing on the sand beach area in front of the stage.  I noticed that Adam Ezra Group pulled up in their van and I got to hang out with my New England buddies on the last day of their national tour.

Next up on the second stage was the Dead Roses.  They opened with a jam that referenced a few different Dead tunes, I was pretty sure I heard a Dark Star coming, and they settled into Birdsong as the first real song of the set.  The band is the full 6 piece traditional Dead lineup with two drummers, keys, bass, and two guitarists.  It does seem however that either of the guitar players is ready and willing to take the lead, rather than a lead and rhythm combination.  They continue to roll through Grateful material including Dark Hollow and now they’re in Eyes of the World.  The band has good energy, but it’s not the best rhythmically, to be honest.  They are having a real good time and you can tell.  It was just a few songs for a tweener set, and Adam Ezra Group is getting ready on the main stage, but Dead Roses said that they will be back for the next tweener.

Adam Ezra Group:  I’d been looking forward to this all weekend!  They opened up strong with a song that I am less familiar with, perhaps called C’mon C’mon?  After a quick dedication to Angel, a veteran AEG fan from New England, the band went into a nicely layered version of Flyin, a song from early in the Adam Ezra Group song book.  Josh Gold took the band in a nice direction on the accordion. The band is warming up nicely and folks are coming to check ’em out.  Three Days is up next and this may just be a day that belongs to Josh Gold, his piano solo  is really beautiful, with great tone coming through the system. 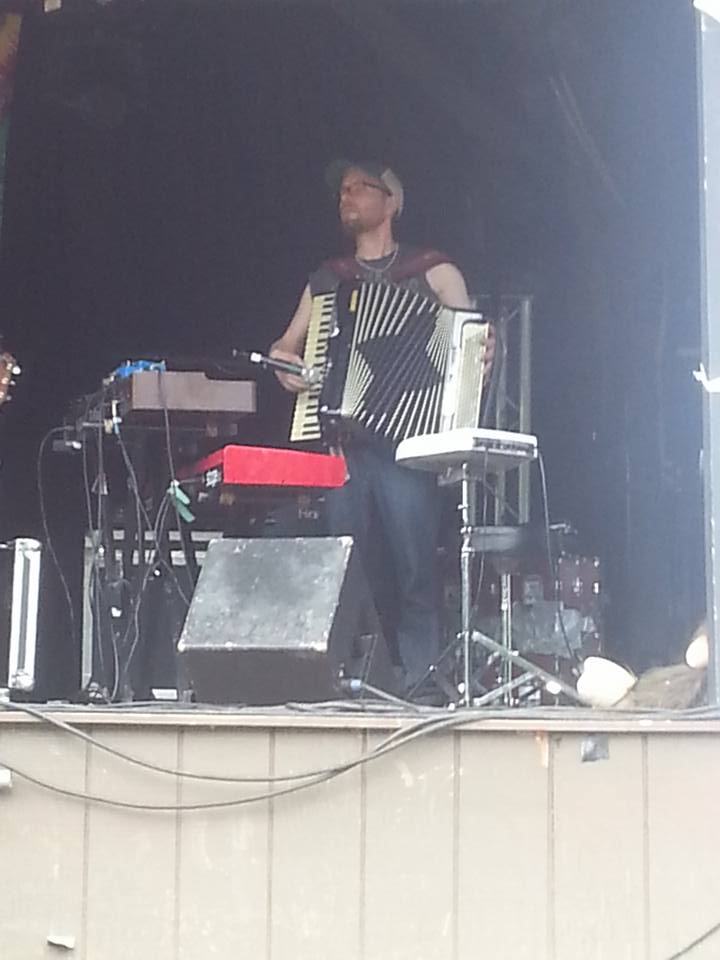 Scandal is next on the set list, with Francis putting down his bass and picking up the garbage can lids that are a fixture on AEG tour, and was banging away.  Josh Gold killed it on the spoons and Corinna Smith was not to be outdone, and picks up a 6 foot length of two by four and is hitting it with another piece of wood.

Saying that they couldn’t play Gratefulfest without a nod to its namesake, Adam introduced the Merle Haggard tune, Mama Tried, a great effort to reach out to the crowd.  Corinna threw down a great violin solo injecting a nice country feel into the song.   A newer, and super appropriately placed song for this day, Hippie Girl came next….  patchouli…. 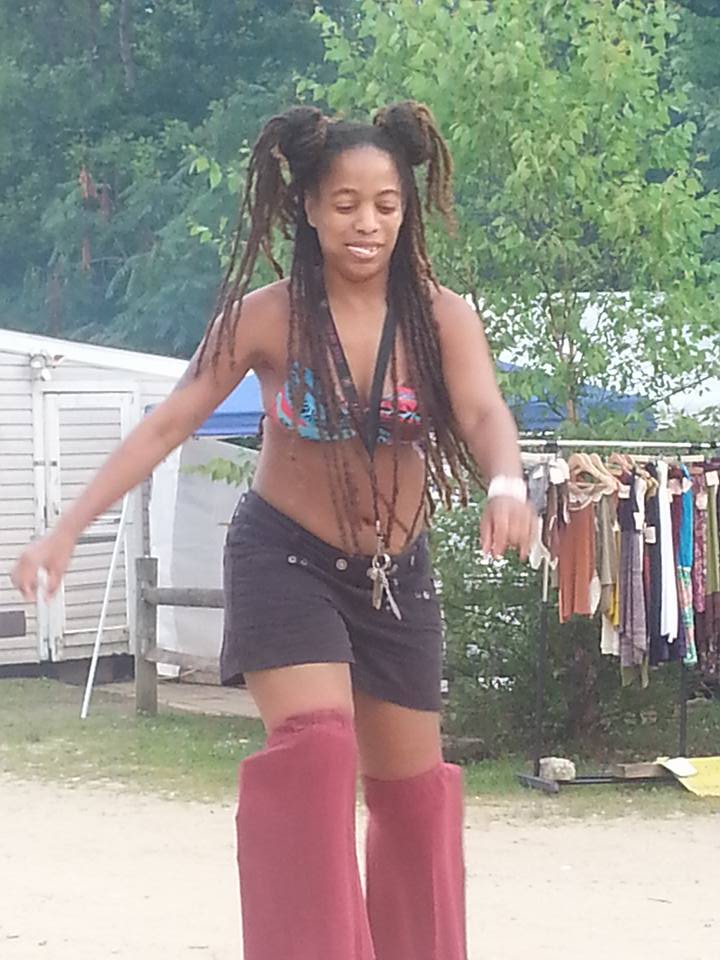 feels like, the brass band in my lungs.  It was a classic rant, end of tour, full of hope, and readiness for the next tour.  The obligatory Devil Came Up to Boston really warmed the crowd to the band.  They were not dampened by the poop truck that came rolling through to clean out the portojohns during his set-  We shall overcome…

14 Days.  Josh Gold is murdering the keyboard solo; how does he get that dirty guitar sound out of a keyboard?  The darkness in the sound at the end of the song is carried into the next one, Devil’s Side.  But from the initial darkness, Corinna and Adam’s vocals during the chorus touch the more tender side, beautifully.  The vocal harmonies over the last 1-2 years have really improved, and give the music a quality that is easily appreciated.  The drum and percussion solo during the end of Devil’s Side is different now in the absence of long time percussionist Turtle who is not on the road these days.  Adam picks up his banjo and out comes Steal Your Daughter.  The sound on this one is real distinct, they get the percussive feel of the banjo translated into the rest of the band and the resultant driving rhythm is exactly what this song, and this crowd needs.

To close his show, Adam dismissed the band and played for the crowd by himself.  A rare song in the Adam Ezra world, Blind Faith’s Can’t Find My Way Home solo acoustic, beautiful and tender.

John Kadlecik is walking around shopping in the booths and saying hey to people. 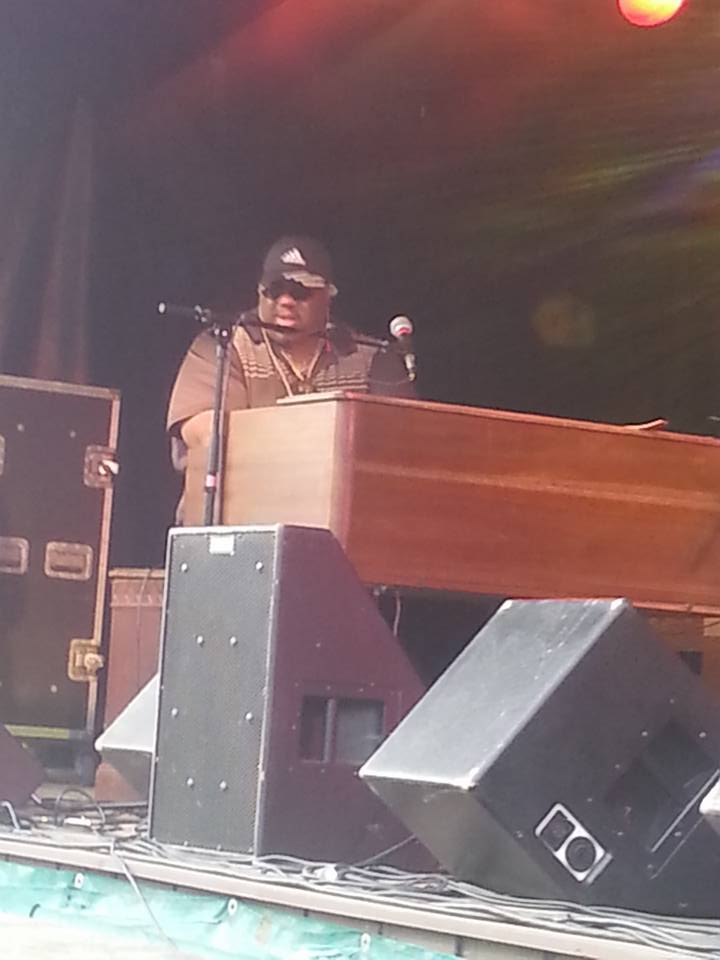 While the band is a little loose for my tastes, there is a nice crowd building in front of them, and they are enthralled.  Shouts of appreciation greet the band between each song, with people shouting out encouragement to their favorite player.  Their set closed with China Cat Sunflower and I Know You Rider.

Struggling Man      I Saw Her Standing There 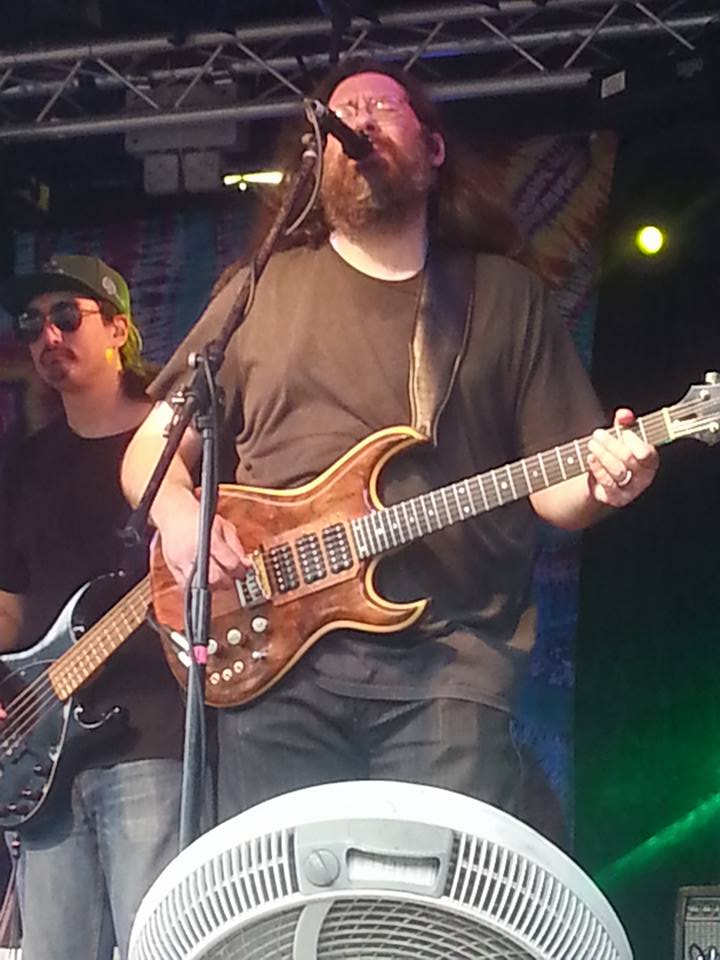 I had the great pleasure of meeting Dave Hebert (ABear) both after the show on the first night and before the show on the second day.  He and I chatted about how good he is feeling, how a new outlook and better living have really lightened his mood, and has him feeling better than he has in years.  You can really hear it in his voice.  In all of the times that I’ve seen modern day JGB I have never heard him in such strong and clear voice.  His guitar playing is as masterful as ever, but his stage presence, smile, and vocal quality have never been better.

Must Have Been the Roses      The band is sounding so fine, right on point.    Ain’t No Bread in the 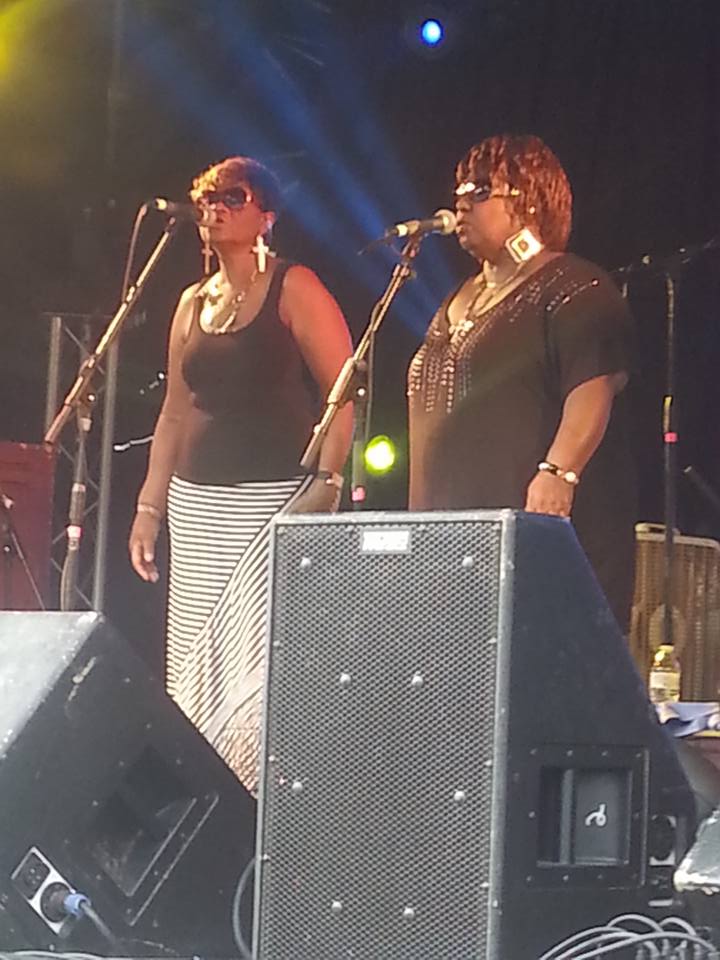 Breadbox            I’ll Be with Thee  This is the first song that really focused on the ladies, and it was sweet and strong.         Magnificent Sanctuary Band (Donny Hathaway)  I have to admit that I’ve never heard this one before, but it continues the gospel oriented vibe that they started with I’ll Be With Thee.

Once again it seems as if the band is operating without a set list.  I got to chat with John K backstage and I mentioned that I was live blogging the set list, and he said GREAT!  At least someone is keeping track.    You can see them interacting onstage, talking, and just really being into playing together.  The excitement level coming off of this band and the audience at every one of their shows is palpable.

Might As Well        Tin Roof Shack by the Highway       Ring Them Bells (Bob Dylan)     Hard Highway (Kadlecik)    The jam in this song went so far afield in such a short period of time, it was amazing.  The jam seemed to have no easily connection to the theme.  And then, as if they were switching on a light, 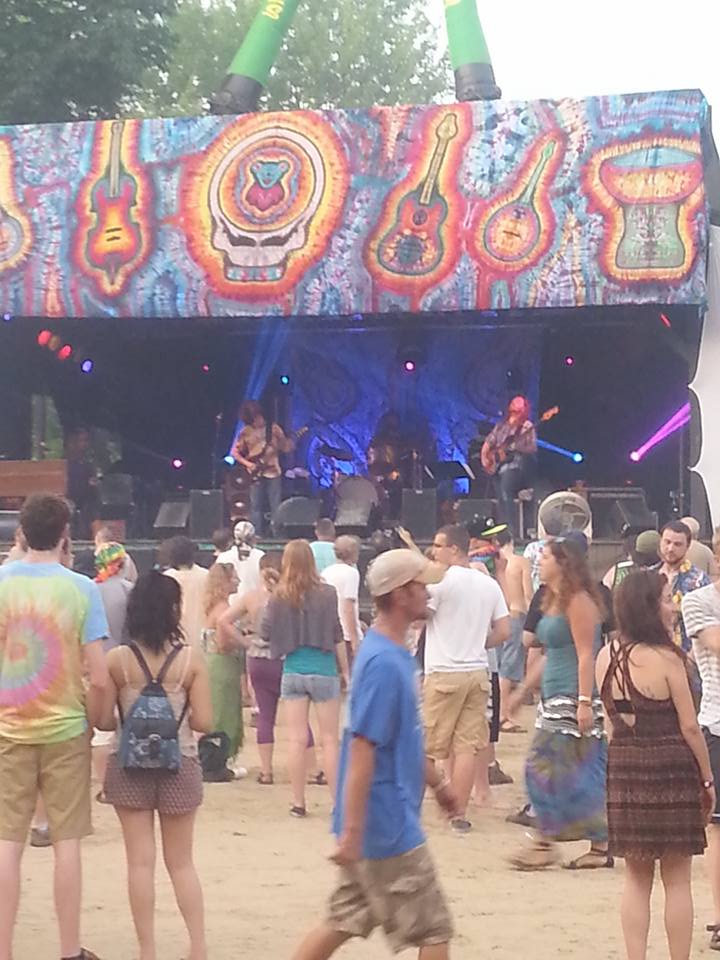 the band returned to Hard Highway, as if there really was nothing to it.

Deal  (Reed sings)    The Wingmen took this one really far out too-  at one point during the post vocals jam, they pulled out their psychedelic ray gun and turned everything on its head for about four beats.  It was like you were being transmorgyphied, but just for a second-  they then let the jam wander and meander for a good long while before deconstructing it, and eventually letting it resolve into silence.  Kadlecik briefly embraced Mathis on stage after the song concluded…

Sister Smiles       Liberty    They let this one spill out patiently,  carefully crafting the pace.  It was purposeful, restrained but powerful.  They were wringing the essence of the song directly out of it, and sharing it with the audience.  Amazing. 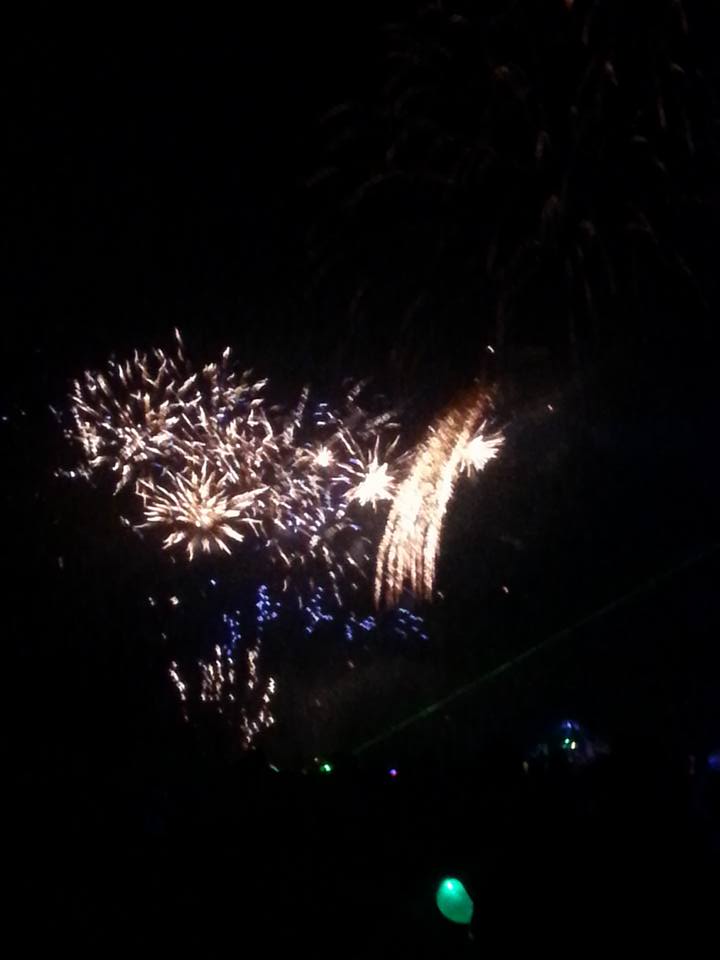 During set break the fireworks show began.  Over the lake, beautiful, and psychedelic.  The band came on stage and began during the fireworks.  The introduction to Nobody Told Me signaled the start of the second set.  The fireworks continued for a good 2-3 minutes while the band jammed to it.  You could see band members watching the fireworks and see it effecting their choice of notes and tempo.  The display ended in a stupendous finale, and the band began the song in earnest.

Estimated Prophet (Reed sings) was played traditionally, aside from the fact that none of what these guys are doing are on script.  Eyes of the World followed, and had significant deconstructionist jamming in it.  Kadlecik was holding down vocals and the jam was occasionally punctuated by a stray firework.

Reed Mathis sings a song that may be called Whereabouts Unknown  (I later figured out and was informed by a reader too that it’s the Van Morrison tune Alan Watts blues.  I don’t know why I didn’t know that having seen them play it a few times- but you know how festival weekends can be!!)   At times it became discordant and then resolved again.  Kadlecik steered everyone into Terrapin Lady with a Fan.   Believe It or Not   any band can play it fast, few bands can play it slow and not only get away with it, but thrive.

Not Fade Away  –  a celebration. 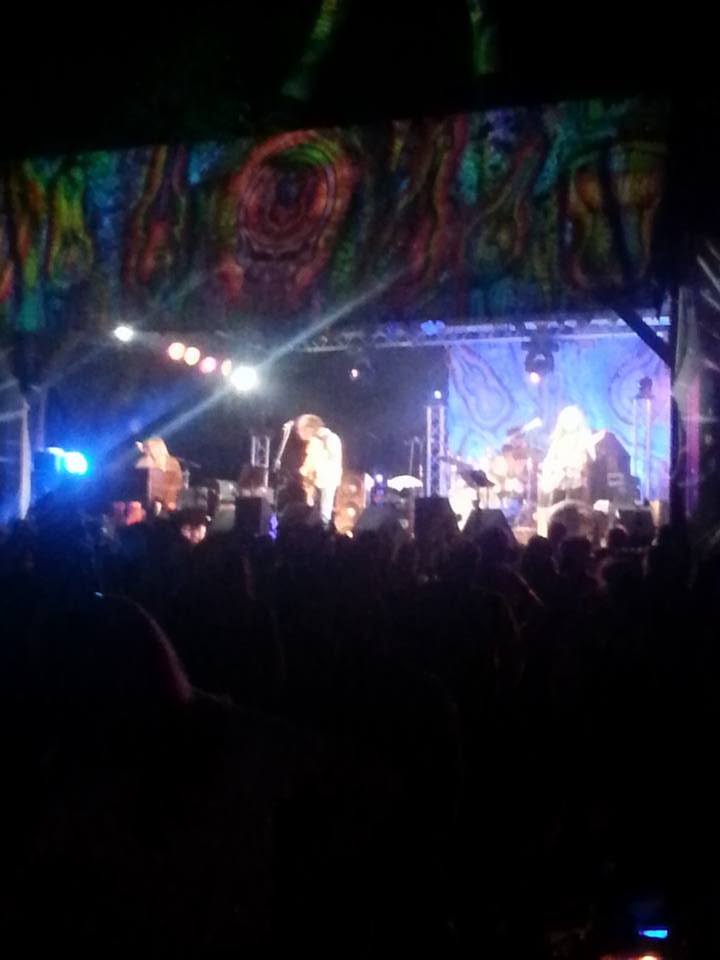 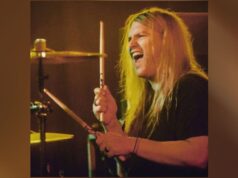