To bring my whole Rush experience full circle, I took my son Sam to his third Rush show for his Bar MItzvah present.  To boot, we went with my boyhood best friend, with whom I went to my first Rush concert, a ticket he bought for me for my Bar MItzvah-  and his twelve year old daughter-  so the perfect evening was set. The show started, and the band fired up loud and hard.

The first cuts were from the band’s last album Clockwork Angels and were a bit too loud for me to be easily able to identify them.  I’m also less familiar with the latest 4-5 albums- and they weren’t playing the obvious cuts from those records.  It became clear shortly that they were moving backward through albums, taking a cut or two from each album as they moved backward through the band’s history.

During the early part of this show, the stage was set in the traditional modern Rush way, a mixture of knick knacks, steam punk sensibilities, tons of modern lighting, screens adorning each side of the stage and dead center. As Rush fans have become accustomed, workers occasionally hit the stage to replace props, trading bass stacks for washing machines, moving the popcorn machine around, and adding guitar stacks to Alex Lifeson’s huge pile of speakers.  As the set wore on, the song choices became more familiar to me personally, and the sound and volume settled down some, though throughout the first set it was loud and a bit shaky truthfully in terms of the audio quality.  They skipped over a big chunk of the 90s with no cuts from Presto, Power Windows, or Hold Your Fire, instead heading straight to Between the Wheels from Grace Under Pressure as well as finishing the set with the Signals cut Subdivisions.

There was a lengthy and needed set break which was preceded by a great video montage of the band’s familiar band member skits from prior tours, but this time it was entirely outtakes and they were hilarious.

Second set opened and you just knew you were in for a hits package and some major tunes.  The sound was much more dialed and the vocals and instruments were far clearer.  This may also be attributable to me being more familiar with the tunes.  They continued their backward march through time with the set opener Tom Sawyer from Moving Pictures.  The first big surprise came next with another cut from that same album which featured major hits from Limelight to Red Barchetta, but instead the band chose to play The Camera Eye which was simply sublime.

From the video channel of Tangled Food Chain

Rush are on record as saying that it was the hardest live tune to learn, but they let it unfurl with patience and it was truly breathtaking.  I had a vivid memory of that song at my first Rush show in 1983 on the Signals tour, and it was filled with passion and skill. 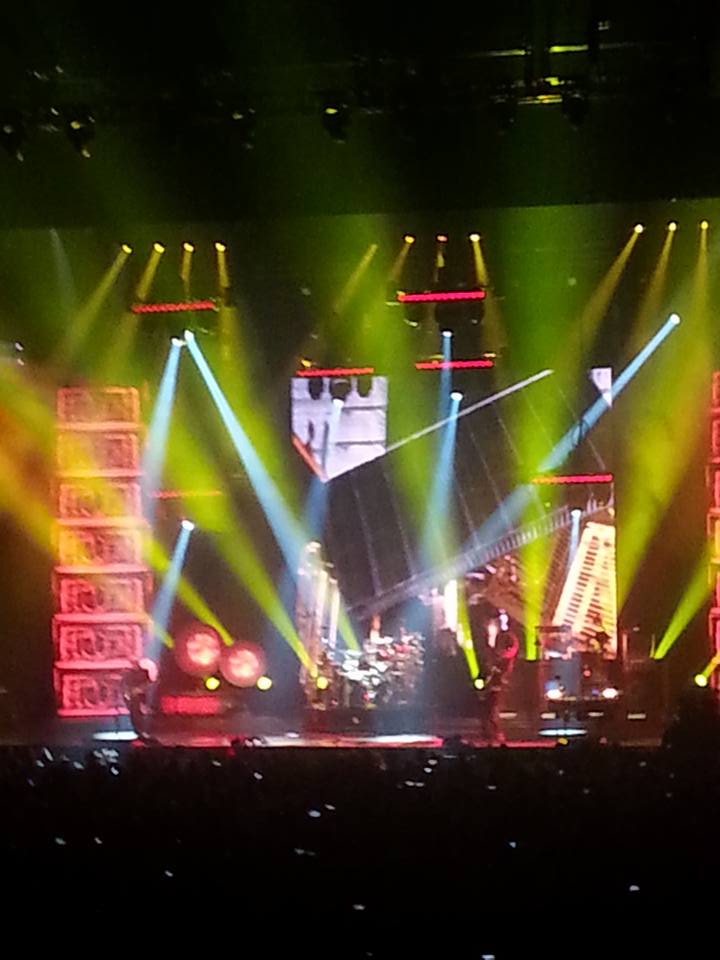 This theme of epic pieces that one wouldn’t expect continued as the band regressed through time directly after the expected and awesome Spirit of Radio.  Geddy Lee, whose work load at this and all shows is tremendous between vocals, keys and epic bass- previewed the next live selection, Jacob’s Ladder, saying that they had not played it in quite some time.  And in my three decades of seeing Rush I don’t recall ever having seen it.  It was completely amazing, and I was joyful with its perfection. I’m not positive on the order but I believe that Hemispheres Prelude was next, directly followed by Cygnus X-1 from A Farewell to Kings as an interesting one two punch, in reverse temporal order.

The band’s only legitimate hit song, Closer to the Heart came next and was a great change in pace with beautiful acoustic guitar work by Alex Lifeson during the introduction. Onward and backward they marched through time.  The videos were frequently montages of fans reveling in their love of the band, and photos of the band loving life.  This really felt like a celebration of the band and their fans, a triumphant victory lap for a band whose career has spanned decades, exceeded anyone’s expectation, and made them one of the most significant forces in both prog rock and early metal, while maintaining a classic rock / arena rock sensibility.

To not mention the best drummer of all time, Neil Peart, up until this point is ironic- as he was solid as a rock as usual.  He had his obligatory massive drum solo, but it was slightly less bombastic than usual, a concise 4-5 minutes I would say and inserted within a song (Hemispheres I believe..)  The band is all aging surely, but with grace and without a shred of diminishing skill evident.

As the show progressed the stage continued to devolve- with the work crew removing equipment and replacing it with props and equipment apropos to the time frame that was being featured.  The light show also followed them back in time, reflective of the material, with videos largely dropping out of favor as they worked back into their earlier material.  The video screens were mostly focusing on live action, which was great. Oh the epicness did not stop there, by any stretch.  Both Lee and Lifeson busted out double neck guitars, and you just knew what was coming-  Xanadu in all its glory.  The band stretched out and played every note, shredding.  Peart took advantage of his concert bells, hitting them with a frayed mallet that has likely been his friend and tour equipment for decades.  The set closed with four parts from their seminal concept album 2112 including Overture, Temples of Syrinx, Presentation, and Finale.

From the video channel of Tangled Food Chain

I was most surprised by Presentation as I don’t believe that was a normal part of their set the last 20-30 years, or perhaps I just missed it. The band took the perfunctory break before the encore, but not a single person left their seat for even a second.

Another funny video, this time starring Eugene Levy in his normal nerdy less than perfectly informed persona, was played before they retook the stage for their encores.

Another new old one- Lakeside Park began the mini-set encore and was relaxed and great, helping to cement the family vibe that they had created within their fan base that night. Right around this time the work crew picked up the band’s amp speakers and put them on what looked like high school cafeteria chairs, clearly illustrating where the band originated.

Anthem from Fly By Night was next in all its bombastic glory.  And the band concluded one of the most epic nights of my life with two cuts from their debut album: What You’re Doing and the obligatory Working Man.  Wowzers.

As we were readying ourselves to leave, another humorous video of the band played for a few minutes, and everyone departed in an orderly and satisfied fashion.  We came, we saw, were awed and amazed,  I said “That was SICK!!!” about 100 times, and made plans for the future.