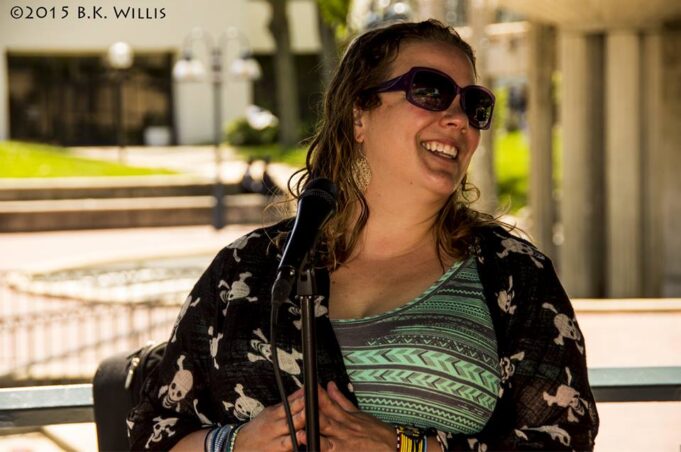 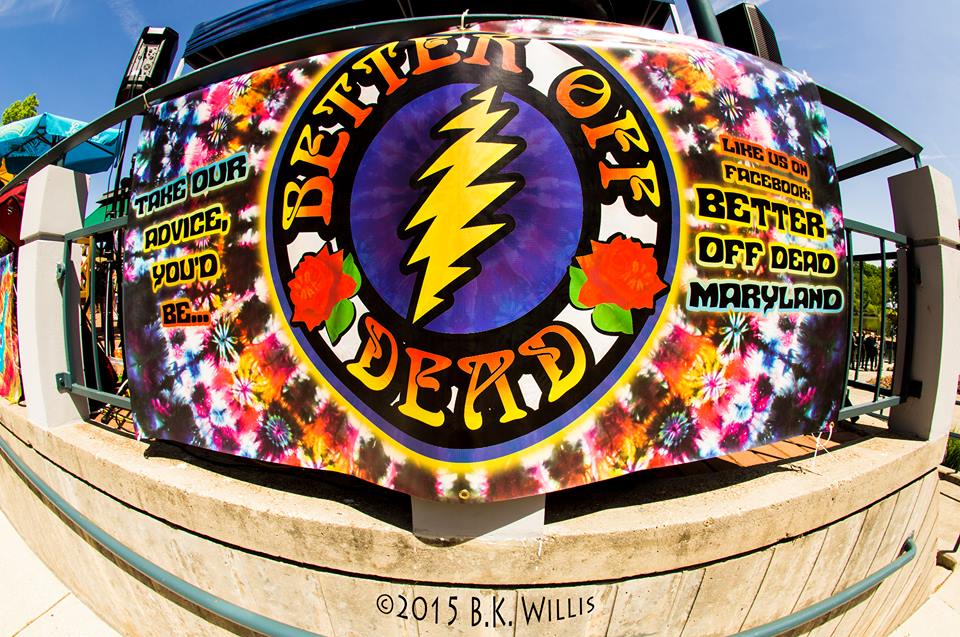 As a preamble to the highly anticipated “Dear Jerry” show at Merriweather (dubbed “Jerryweather” by fans) Post Pavilion, Better Off Dead – featuring vocalist Jess Lake – delivered a smoking 4 hour show that was arguably worthy of a spot on the big stage at the main event only a few short blocks away. While the players at the main event were busy with tuning and sound checks, Better Off Dead were treating the fans to a show that, in many ways, proved to be a more appropriate tribute and celebration of the man and the band. While none of the “Core Four” chose to perform together, Better Off Dead provided a show that had the real feel of a Grateful Dead performance. And that is their specialty and what sets them apart from the plethora of Grateful Dead cover/tribute bands – they don’t attempt to re-create GD shows – they actually CREATE the feel and vibe of the Grateful Dead at their best without attempting to imitate the band.

So, given the beautiful blue skies and abundance of sun, it was a bit of kismet when the band opened with a sweet, floating rendition of “Here Comes Sunshine” with Wilkes on vocals that quickly began drawing people down to the patio to listen and dance in the sunshine by the lake. A lovely version of “Ramble On Rose” came next with Rex on lead vocals before the band launched into a perky “Tennessee Jed” and then landed on a beautiful “Mission In The Rain” with Butte and Lake providing tender harmonies to Wilkes’ lead vocals.  The boogie-woogie beat of “Think” came next with Will Layman showing off his considerable keyboard talents while the band got down and funky for the dancing crowd who saw no respite when the band jumped right into the high-energy “Ain’t No Bread In The Breadbox,” keeping everyone’s bones shakin’.

And then it happened! A true Jerry moment… perfect for the theme of the day and completely unplanned. The band started in to the first bars of “Casey Jones” and Wilkes completely blanked on the lyrics. He knows the lyrics. We all do. But it happens sometimes, and what better time and place than at a celebration of Jerry Garcia? Wilkes laughed, amused at his mistake, before quickly recovering. Somewhere, Jerry was smiling.

Butte took lead vocals next on a pounding version of “The Greatest Story Every Told” with Wilkes and Lake providing backing harmonies. Closing out the first set, the band performed a moving, wistful arrangement of “He’s Gone” that had several people in tears, including a couple of band members. 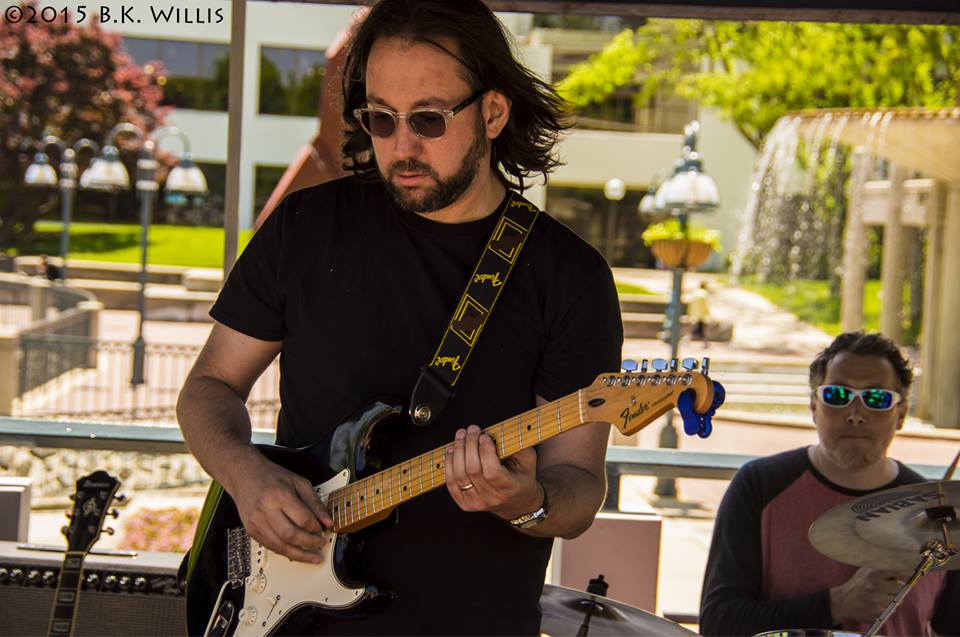 **Interesting fact: Despite popular belief, “He’s Gone” was not written for founding member Ron “Pigpen” McKernan – it was actually written about the embezzlement of band money and the subsequent disappearance of Mickey Hart’s father and one time band manager, Lenny Hart, who was still alive when it was written. Mickey was so embarrassed and humiliated by his father’s actions that he left the band for 3 years. Sometimes it’s better not to know the story behind songs – it’s a much more touching song if you don’t know that story. But now you do. Sorry about that. My bad.*

After a short set break, the band returned and turned things up a notch, starting off with “Deal” before heading into a growling performance of the Beatles’ classic, “Revolution,” performed by Wilkes. From the darker themed “Revolution” the band flipped to the other side of the spectrum with a jubilant “Dancing In The Streets” performed by Butte and Lake that had people all around dancing – from the lawn behind the band to the people walking around the lake, people were stopping to dance! The good vibes had definitely taken hold and were spreading as Jess Lake took the lead for an exquisite rendition of “Stir It Up” that resulted in tremendous cheers for Lake.

But Lake wasn’t quite done wowing the crowd, belting out some stellar background vocals and harmonies with Wilkes on the Butte lead epic rendition of “The Music Never Stopped” before they headed into an appropriately sweet version of “How Sweet It Is (To Be Loved By You).” “The Night They Drove Old Dixie Down” followed, and for me, this was the only “low” point of the show. The song was performed well with no mistakes or miscues but the tempo seemed almost painfully slow and the placement between two much more up-tempo songs just didn’t work for me. The crowd, however, seemed to enjoy it very much and felt the intensity and emotion that was obviously lost on me. I was in the mood to dance, and this was simply not a song to which one dances. Quickly enough though, my mood was appeased with “Loose Lucy” and an exuberant finale of “Quinn The Eskimo.” 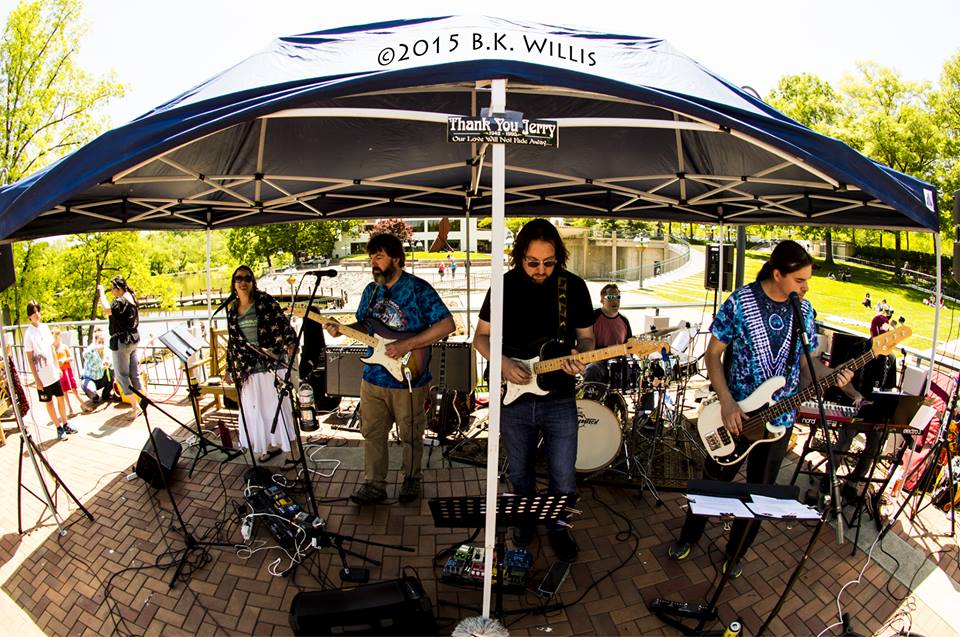 But wait! Everyone was having such a grate time that the management at Clyde’s gave the band an extra hour to play! Wilkes was beaming as the surprise extra hour was announced and quickly pulled out “The Harder They Come” to start off the unexpected third set. Then came an exquisite performance of “Help On The Way>Slipknot>Franklin’s Tower” with lots of jams to keep the crowd dancing. The band finished off with a rocking “Turn On Your Lovelight” and closed with “My Sisters and Brothers” as the crowd dwindled to begin their trek to the evening’s big show.

I’ve seen a lot of Grateful Dead cover/tribute bands over the years but none quite like Better Off Dead. The band members have a palpable connection with each other that is reminiscent of the connection the members of Grateful Dead once shared. The band is tight and very well rehearsed and the love of the music they perform is clear to see and hear. Throughout the day, people passing by stopped to enjoy a few moments of music and dancing before continuing on their way. From hula hoopers and bubbles floating through and into the clear blue sky to the numerous people dancing on the lawn and stairs, the festive mood of the day permeated the air. And then it was over, leaving one to contemplate whether the band was ever there at all… or was it just a Sunshine Daydream?

Mission In The Rain

Ain’t No Bread In The Breadbox

The Greatest Story Ever Told

Dancing In The Streets 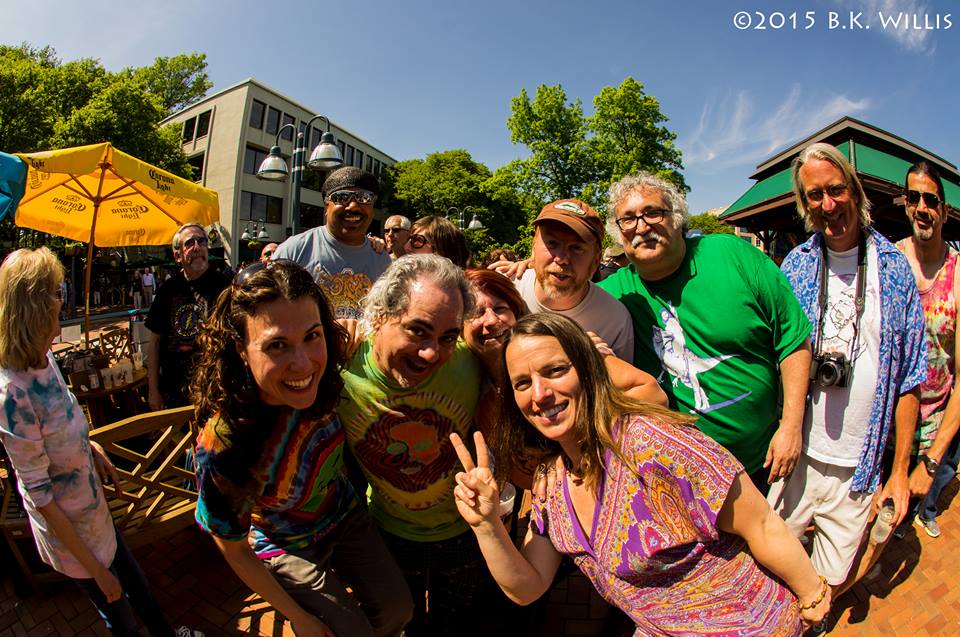 The Night They Drove Old Dixie Down 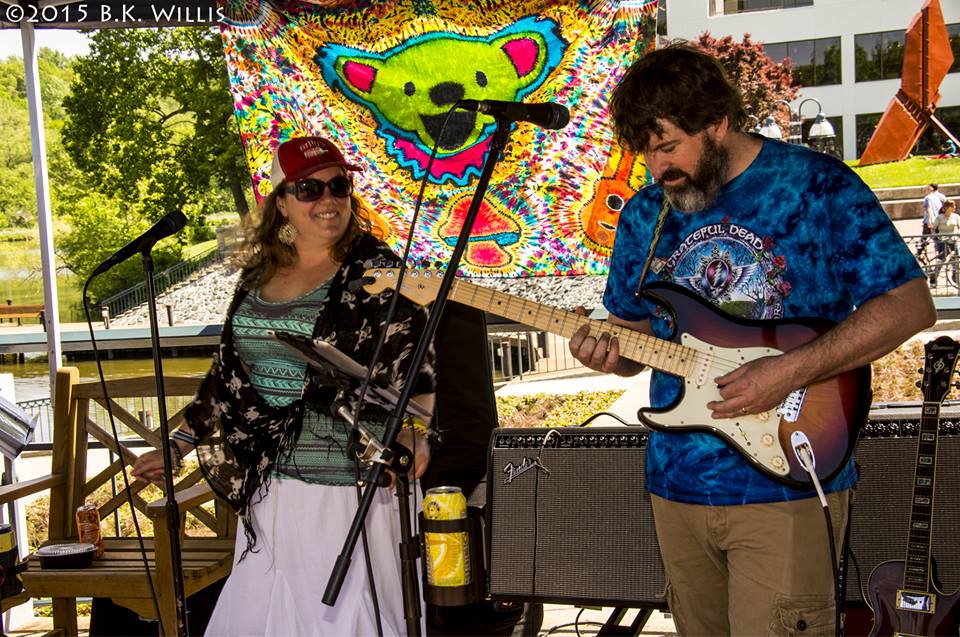 Help On The Way>Slipknot>Franklin’s Tower

Turn On Your Lovelight

My Sisters And Brothers