Northampton MA’s newest nightclub continues to make waves as Hinge hosts the latest installment of their Grateful Dead night.  Catering to bands and music that had previously been under represented in that town, which is in close proximity to a half a dozen colleges, Hinge is bringing music fans together.

Bruce Mandaro Band played Tuesday night at Hinge in Northampton, MA for Grateful Dead Night. This week tallies it up to number 19 of great sound, great energy, and a well needed vibe. I have yet to have reason though to expect less of Hinge.

Each set the Bruce Mandaro Band performed were solid and the transitions into each song were smooth and easy to move your body with
on the dance floor. I was particularly captured by the transition into “I Know You Rider.” It created such a stir of excitement because I knew it was coming, but they were successful with giving to their audience anticipation for it… and absolute Joy. Everyone around me sang along and spun around. We lifted our faces and our voices rang true and very off all at once, creating my favorite memory of the night. But this is what it’s all about. Smiling with strangers and celebrating our love for the legend. 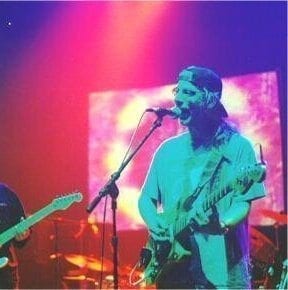 Grateful Dead Night is one of those unique events you know you’re going to meet a friend there, see an old friend as well, and make a few more before you leave. You know you’re going to have a great time and you know exactly where you are going if the chaos of the day hasn’t taken you in for the night. A lot of times though, it’s just the medicine to connect you to exactly where you should be.

This Tuesday Night, the Bruce Mandaro Band kept me alive with their covers of The Grateful Dead, and helped me get exactly where I should be.