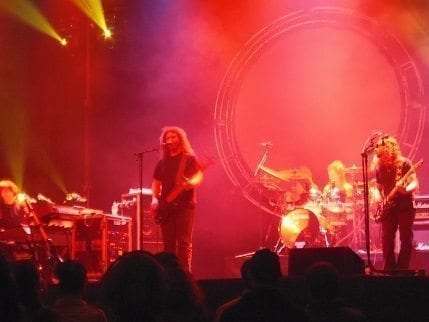 So I had the Machine once before, some six or seven years ago I’m guessing in the same exact location, so I knew what to expect.  The Machine is the premier Pink Floyd tribute band in the US, playing from coast to coast.  But since the last time I had seen them the band had gone through some changes.  I had also recently bought The Wall and Wish You Were Here for my son, who is twelve, and I have been watching with great interest as his admiration for the band on which I grew up and formed my musical tastes took hold in his consciousness.

The band has transformed quite a bit though.  The original guitar player and primary vocalist retired a few years ago, and members of the band shifted around.  So I was interested to see how the focus of the band may have changed.  Ryan Ball had been the bassist back then, and is now their guitar player and also contributes vocals.  Scott Chasolen is on keyboards and I have been following his musical meanderings since I was a huge fan of his NYC jazz funk outfit, ulu.  Adam Minkoff handles the primary vocal duties as well as bass, and is also in Chasolen’s solo and original project, and Tahrah Cohen is on drums.

Since Sam, my son, was most recently emerging himself in the Wall, we were very pleased that they opened with several numbers from that album.  In the Flesh was followed by Thin Ice.  Fearless, from the album Meddle, was a pleasant surprise so early in the set, and selections from Dark Side of the Moon included Breathe which quickly went into Time.

The vocal duties were handled deftly by Minkoff who could easily handle the vocals of either Waters or Gilmour, and his bass in the first set was excellent and true to the Pink Floyd tradition.  Ball is a clear and apt student of the guitar parts, getting the licks and tones down perfectly. Have a Cigar was classic.  High Hopes, a song from the band’s final studio album the Division Bell began to show us the diversity of material that the Machine could handle.  The band was able to bring out the beauty and unique tones and qualities of this song, which is likely to be among the more obscure of the first set.  After taking us on this journey, they brought the crowd back to more familiar territory with Sheep from Animals which was excellent.

This final song of the first set was a good illustration of the departures that the Machine are willing and able to make and a good harbinger of the second set.  Certainly that version was true to the original but the Machine are able to shimmy and vacillate just the littlest bit, to breathe a smidgeon of their own take on the song.  This was my favorite part of the first time that I had seen the Machine, when they took liberties with Astonomy Dominae, the moments where they ceased being Pink Floyd imitators, and became the Machine.

There was a set break and the band came back to the sold out theater to begin their second set.  I took a moment to hit the outdoors and ran into some friends.  The crowd was very enthusiastic but you could tell they were there for the material-  cheering was limited to the song breaks, and no dancing was evident despite what seemed like nearly one thousand people in attendance.  Fans wanted nothing to take away from their experience.

Set two opened with another selection from The Wall, this time Hey You.  Like in the first set, the band was not afraid to delve into “newer” material by hitting the album A Momentary Lapse or Reason’s Signs of Life into Learning to Fly.  As fans might hope, the full sound effects of oars hitting water were present.  This is the great thing about the Machine, they are able to give you the little bells and whistles, the sound effects you most seek, but don’t obsess on them to the point where it limits their maneuverability to play with the material.

Minkoff then dove into ancient material doing the song If from the album Atom Heart Mother illustrating the band’s mastery of nearly any of the sixteen albums put out by Pink Floyd. But fans had nothing to fear as classic single Money was up next.  Then the song Remember a Day, an obscure song from the second album A Saucerful of Secrets led us all the way back to the late 1960s era of the band.  Wrenching us back into classic cuts material, Young Lust brought us back to more familiar ground.

This is where the genius of the current version of The Machine becomes most evident.  Instead of just shimmying and vacillating, the band went into uncharted territory.  Finding elements of Young Lust that you would not realize could be expanded upon, the band took us on a sonic journey, with elements of improvisation and surprise that really were totally unexpected.  Had you walked into the theater at that moment, you might not have known even that you were listening to a Pink Floyd tribute.

Chasolen in particular is very adept at this straying from the Floyd prescribed path.  He has an uncanny ability to really channel the individual genius of Richard Wright, and to showcase what made him such a huge contributor to the sounds of Pink Floyd.  Minkoff shucked the confines of Waters emulated bass riffs and accessed elements of other rock bass deities from Allen Woody to Mike Gordon.  Cohen and Ball stayed closer to the vest anchoring the band in the traditional sounds and textures, allowing for both solidity and imagination.

Knowing though why the fans were there, the Machine brought it back to familiar territory again with Wish You Were Here and the whole theater erupted in song as the band encouraged everyone to sing along.  Not content with this accessible material, Chasolen fired into the early single See Emily Play and he was easily able to inject his own personality into the wry and sometimes sarcastic and playfully perverted fell of the song.

An epic version of Comfortably Numb somewhat predictably ended the second set, but really, that’s why people come to the show.  And while Ryan Ball certainly had ample opportunity to show his skills through the show, he used this song as the vehicle that it is to showcase his prowess and showcase the individual brilliance that is David Gilmour’s style.  Cohen, not being saddled with necessarily the most complicated drum assignment ever, was able to inject energy and also an enormous amount of tone.  The way she struck the drums really gave it all of the meat and heft that the original recordings imply.

The whole band was particularly adept at bringing out the nuances of the band, while showing us details that we may never had seen before.  In particular, the bluesy side of the band was fully on display this night, helping us to see the inspiration of where Pink Floyd was inspired.

After a very short departure from stage, The Machine returned for the encore, a lengthy take on the second half of Shine on You Crazy Diamond from Wish You Were Here.  Given this last opportunity, the band showcased their ability to interpret the material playfully.  They had fun on stage, and you could tell, and it was fun to experience the music with them.

I had a brief chance to chat, along with other fans, with Chasolen at the end of the night.  My comment to him was, “Man, that’s a great band you have there.  Not just a tribute, but a band.”  He responded saying that they were having tons of fun, and that the intense focus that they once felt on meticulously recreating every detail was now being transformed into a desire to breathe life into the material and have fun on stage.  Their ability to realize that goal was for me what was perfect about this band and this show.

If you love Pink Floyd, do not hesitate for one second to see The Machine any time.