John Kadlecik to play with Melvin Seals and JGB

Two shows in the New York area this weekend.

John Kadlecik will once again join his old friend Melvin Seals.  The two were in a band together years ago called the Mix that released an album called American Spring.  That band also featured Jeff Pevar, Greg Anton and bassist Kevin Rosen and was released on Rainman Records. 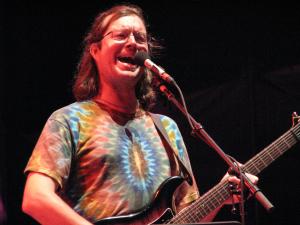 Kadlecik and Seals will be united again this weekend for two shows in the New York area in JGB.  The two shows are tonight at the Brooklyn Bowl and Saturday night at the Capitol Theater in Port Chester, NY.

Kadlecik will most likely be adding lead guitar and vocals, and is well versed in the material.  In addition to his stints as a founding member of Dark Star Orchestra, lead guitar and vocals for Furthur and Phil Lesh and Friends, and his newest project, Golden Gate Wingmen, Kadlecik has been doing runs in Washington DC with a band called DC Mystery Cats.  That band is a Jerry Garcia Band tribute, which does interpretive versions of whole JGB shows.  Fall of 2014 saw a very successful run of sold out shows at Gypsy Sally’s in DC, and just this Tuesday was the first of another six pack of Tuesdays at the same venue.  That show was sold out, next week’s is sold out as is the St Pattys Day show, but the remainder of the run remains on sale.

Golden Gate Wingmen is the band that Kadlecik formed recently with Furthur band mates Jay Lane on drums (Primus, Ratdog) and Jeff Chimenti (The Dead, Ratdog, Furthur) plus Reed Mathis on bass (Billy and the Kids, Tea Leaf Green, Jacob Fred’s Jazz Odyssey).  So far they have performed ten shows all in California and Colorado.  The first east coast dates include June 12th at the Cutting Room (tickets on sale FRI March 13th to the general public) and June 13th at Jam Along the Creek festival in Milmont PA and more shows are likely to be announced for that run.  Tickets for Jam Along the Creek are here.

April 3 and 4, Kadlecik will be joining Box of Rain for shows in Pennsylvania including at the Ardmore Music Hall on April 3rd.  Tickets here.  April 4th is at Santander Performing Arts Center 136 N 6th Street Reading PA 19602 and tickets are available at the center’s box office and at Dragonfly Studio & Gallery and Althea’s Imaginarium.  Kadlecik will be doing an opening electro-coustic set which will be followed by Box of Rain who specialize in recreating the music of the Grateful Dead’s earliest period, 1965- 1974.

Melvin is best known for his long friendship and musical partnership with cultural icon and guitarist Jerry Garcia and the smile of his that lights up the room. Melvin spun his B-3 magic with the Jerry Garcia Band for 18 years and in doing so helped pioneer and define what has now become “Jam Band Music”. From blues to funk to rock to jazz, Melvin Seals serves up a tasty mix with a little R&B and gospel thrown in to spice things up. Melvin and JGB brings an intuitive, expressive style, soul, spontaneity and remarkable chops to the table. With acoustic and electric ingredients and unique combinations of guitar, mandolin, slide and lap steel with savory bass, hearty drums and, of course, a heapin’ helpin’ of the wizard’s magic on Hammond B-3 Organ and keyboards, the result is a most satisfying blend of natural organic grooves that challenges genre boundaries. Their chemistry is the focus from which they create a spontaneous and high art where the sky is the limit musically. They offer an exciting, often psychedelic musical journey that keeps audiences dancing and smiling (and some staring in amazement) for several hours. Melvin is pioneering a path deeper into the musical territory he helped to establish.