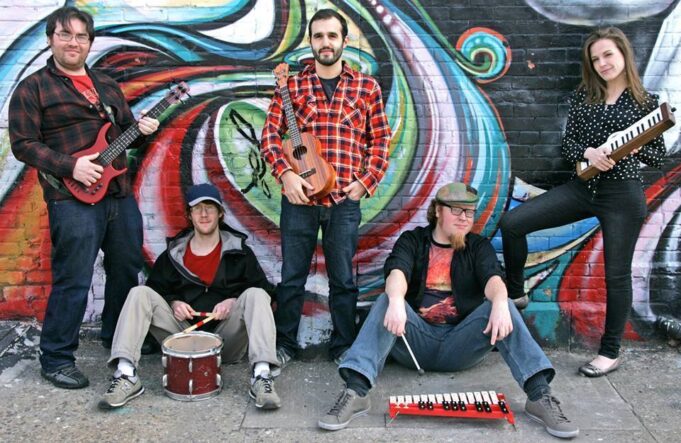 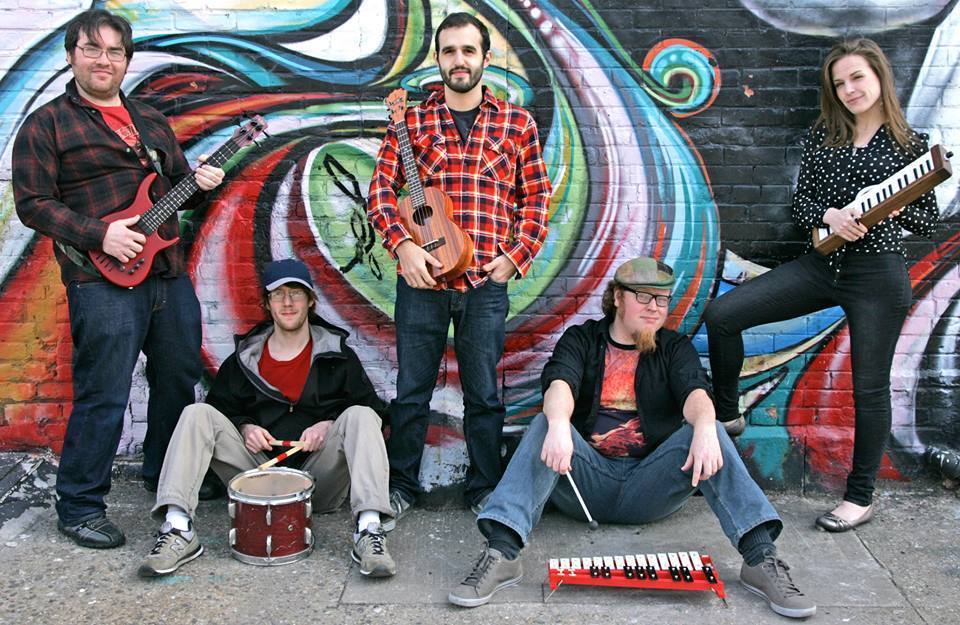 Many know Garcia’s well as the groovy little testament to the Grateful Dead’s beloved front man that is also attached to the Capitol Theater. Of course, it goes without much saying to catch a show at the almighty Cap if you haven’t already, but I can personally attest to the shows Garcia’s regularly hosts as being equally fun and frenetic. Intimate and nostalgic on the one hand, and often an absolute party on the other hand, there’s always the spirit of Jerry Garcia accompanied with nights of fun, fresh contemporary music. This past Thursday, I had the ultimate good fortune to experience Cousin Earth, formerly known as Ukulelien, a progressive ukulele-lead band based out of Brooklyn, play a show there.

Cousin Earth has come to funk out this Port Chester venue before, and it couldn’t be better they were invited back to do so again. Having previously listened only to their online repertoire of YouTube videos and streaming audio, this was my first time seeing the band perform live. After this show, however, I know it will not be my last.

The five-member band got into position and ready to party, you could hear members Joey Calfa and Nate Searing warm up by playing quietly along on ukulele and drums, respectively, with the song in the background. They sounded good.

The band began the night with a bang of both showmanship and familiarity in a cover of “Bohemian Rhapsody,” which was spot on. The slow parts were treated nicely by Calfa’s strumming on ukulele, and the vocal parts, sung very well, sounded perfectly theatrical. Also employing zany facial expressions and a number of syncopated dance moves, part of the live charm of Cousin Earth that came through right away was their love of this theatrical side of show. They have fun with their music and they like to be supremely creative, and they display it clearly on stage.

“Rhapsody” jumped right into another cover called “When I’m Cleaning Windows,” fitting as originally being a song played on ukulele by musician George Formby. The band kept the old-timey feel but, with drums, a bass, two singers and some snappy kazoo playing by lead-singer Terry Brennan, they made it their own. 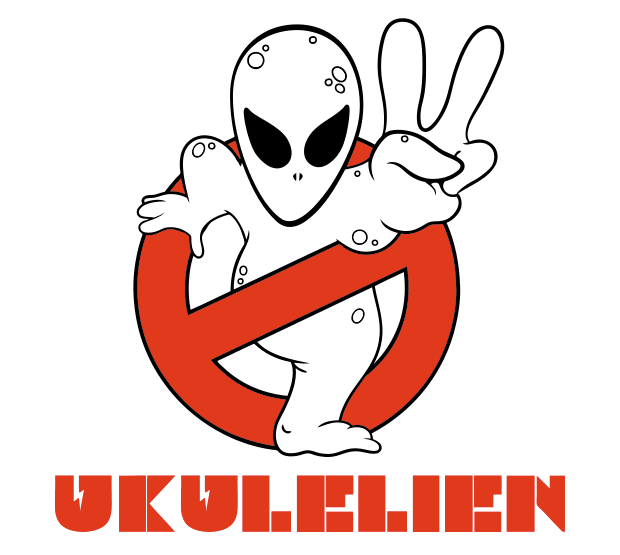 The band then offered a third cover in Phish’s bluesy but quirky road tune, “Possum,” and they began to really rev things up for the rest of the night. Already having given evidence of their full and rich sound in “Windows,” Cousin Earth demonstrated here how intense and powerful the music was going to be for the rest of the night. As the drums, played super heavily but also tightly by Searing, and the bass thundered along, Calfa let himself out of the starting gate and gave his first solo of the set, which was absolutely face-melting. I have to admit I am an inexperienced listener of the ukulele, but I don’t think anyone could shred on it quite like he did over and over again.

From the heat of the phish cover, things began to slip further into the groove territory that the band would rock in for much of the night with the first original, “a song about dinosaurs.” This was tight and funky and also featured some more kazoo from Brennan, who, announcing that he wrote this tune, was also incidentally wearing a shirt with a dinosaur on it. This followed with another bright cover in the Jackson 5’s “I Want You Back,” which featured Lawton singing lead with very soulful chops.

Next came a crowd favorite and a Cousin Earth signature highlight in the Video Game Medley, and I can tell you what throwbacks I was able to joyfully recognize. It started off with a trance-infused, truly danceable version ‘Legend of Zelda Theme,’ where Lawton introduced her melodica and captured the original sound of the ‘Lost Woods Tune’. After gradually increasing speed towards a somewhat gypsy-sounding beat and throwing in some monkey calls, the medley splashed right into the Super Mario Brothers theme. The Mario Bros. theme is a very popular tune for jam and dance bands to tease in the middle of their songs, but all members of Cousin Earth blended together to funkify it in a way better than I’ve heard before. Cruising right through the additional, even heavier and funkier ‘underground’ Mario Bros. theme, band members screamed off the title of the Medley’s ending jam, the ‘Mortal Kombat’ theme, and finished off really strong in this bit as the singers shouted off memorable characters from game.

Some quick ‘thank yous’ were mentioned before the band strode on into another heavy-hitting dance jam called “Dirty Wet Rock.’ With some tight, cool riffs played by the band in the background-featuring some cool distortion on Calfa’s ukulele-lead singer Brennan fired off quick lyrics, and the song rose to one of the many raging climaxes of the night.

Following this the band cooled off into some fun and kookier tunes. Close friend Diego was invited on stage to add some bongos to a slightly jazzier original called “Puerto Rican Pancakes,” where Brennan added to the building of the song with more lighting fast lyrics and another cool kazoo melody. “Green Thumbed Jimmy,” an original and a fast and fun song about vegetables, harkened to the likes of Ween before the band, delivering on a promise to ‘kick the audience members in the childhood’ tropically bopped through a version of ‘Under the Sea,’ where the ukulele sounded right at home.

The funk aspect to Cousin Earth’s set arguably reached a true peak in the next tune, titled simply as “Womp.” The most dance-able jam of the night, “Womp” saw Feldman add a very groovy waa effect to his bass, which thumped behind Calfa and Lawton as they shared in unique-sounding riffs, Lawton playing on melodica again. The band began to venture out into true jam territory, weaving around each other’s playing very nicely, whereupon Calfa busted out another blistering ukulele solo. “Womp” then segued through a brief Halloween-sounding jam, into a great surprise of “Jump Around” by House of Pain, and then, after a wild chromatic climb from the whole band-another tiny highlight of the night-back into “Womp.”

The next was an original “new song,” entitled “Animals,” a pop sounding piece that saw some beautiful sounding vocals from Brennan and Lawton, and was followed by a quick but well-received, and lyrically spot-on, cover of Outkast’s “Hey Ya.” “Klezmer,” the word for a particular type of traditional Jewish music, was the name of the next original, another increasingly fast and tempo-switching breakdown that saw a tease of Umphrey Mcgee’s “Nothing Too Fancy.” I found by the end of the night that this is one of the areas in which all members of Cousin Earth shine together as a great live group, in being able to jump back and forth between rhythms and melodies in unison so succinctly and cleanly. 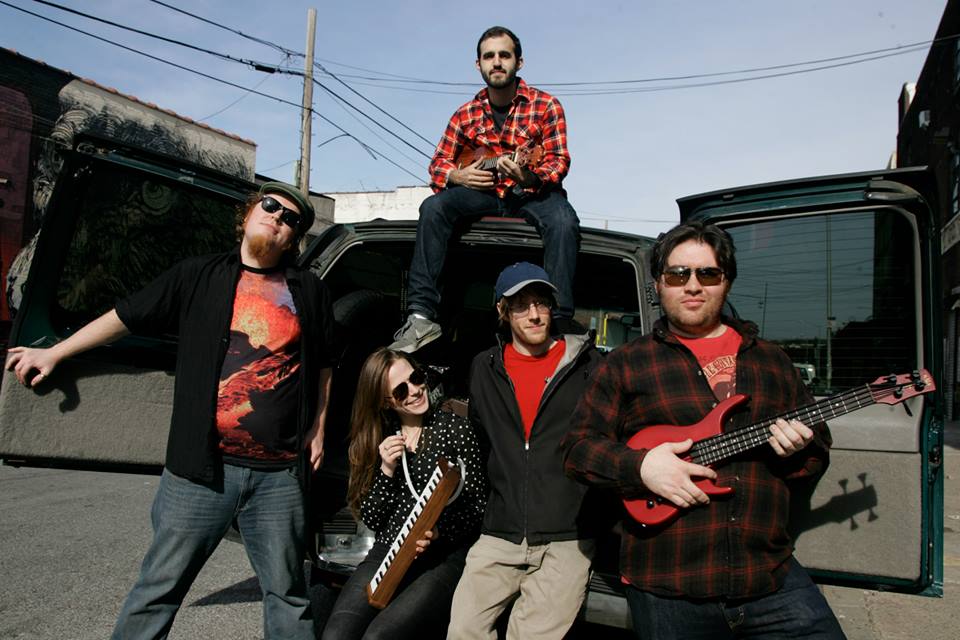 They certainly do this next, in the last scheduled tune of the night, “Point of No Return.” With Calfa again distorting the sound of his ukulele, Feldman again waa-ing up his groovy bass, and Lawton chiming away on xylophone again, the tune reached a first strong, rocking climax before retreating back into a reggae jam that was heavy on the funk. The crowd, dancing weirdly and wildly and wonderfully away, cheered on the musicians as they raged into a ukuele solo-inducing final climax.

After this ending, close friends and new fans alike all urged in unison for one or two or maybe four more encores. The band, after clearing it with the Garcia’s staff, received the “finger flippy roll-on thing,” as bassist Feldman called it-the go-ahead to send the grateful crowd off with one more knockout jam. Grateful indeed, as the encore ‘going out to Jerry,’ was a cover of the Dead’s “China-Rider,” and a shining one at that. China Cat was the perfect kind of funky to match Cousin’s Earth’s tropical sound, especially in regards to Calfa’s strumming which complimented the tune so nicely. Cheery strumming, however, melted into more extended, inspired solos, and here they really did seem a nod to Jerry as they were the most psychedelic of the night.

To the already blissful crowd’s delight and surprise, the China Cat into a groovy and improvisational jam before gliding into the much-anticipated second song. Previously, a band named Max Creek held the title for my favorite cover of “I Know You Rider,” but if you can believe it, as well you should, these folks blew that out of the water, with a version here that featured a seamless, almost slight-of hand transition from the China-jam, and never stopped intensifying until the last note of the night. The last special musical moment of the night was every member of the band and every audience member in Garcia’s small, musically enriched bar singing the beloved chorus in resolute unison to end the show.

From a long list of crowd-favorite covers that they handled supremely, to originals that were, at times, both silly and fun and funky and raging, Cousin Earth is an awesome new outfit that delivered the musical goods, in full party fashion.