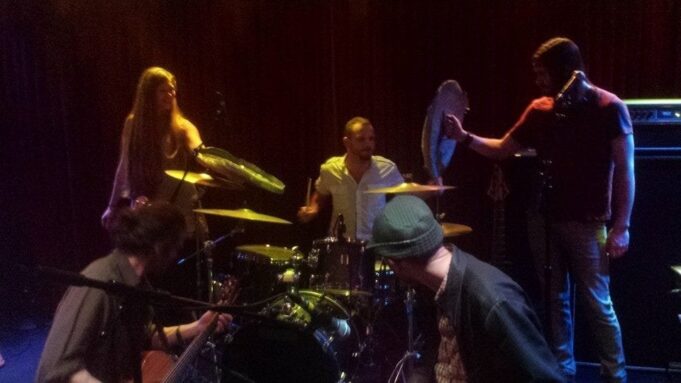 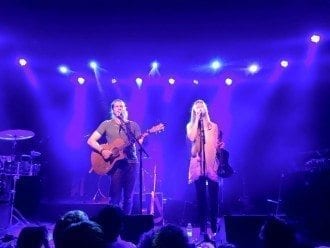 Some photos by Sandie Vanderpool

“Bitter”, being the sub-zero winds swirling around The Knickerbocker Café on Friday the 13th…and “Sweet”, being the reward for battling the elements that have encompassed New England for the past three weeks. In this case, that reward came in the form of an intimate night of seeing Adam Ezra Group perform. This was my fifth time catching the band at “The Knickerbocker”, so I knew I would be seeing a lot of familiar faces, and, most likely, making conversation with NEW faces! That’s exactly what you can expect when you attend any of their shows–Adam seems to have a way of bringing out the happier side of his audience, not only through his music…but, also in his interaction with the crowd.
Adam Ezra Group have announced their annual Boston harbor boat cruise for June 21, check out the facebook event for more information.  This is always a highlight of the year for AEG fans!
But this night has a different feel. A very “raw” feel in the air. As our group of four walked into The Knickerbocker, I think we were all in need of a night out….putting the monumental amounts of snow and freezing winds out of our heads just long enough to be near friends, a few drinks, and some incredible musicians! 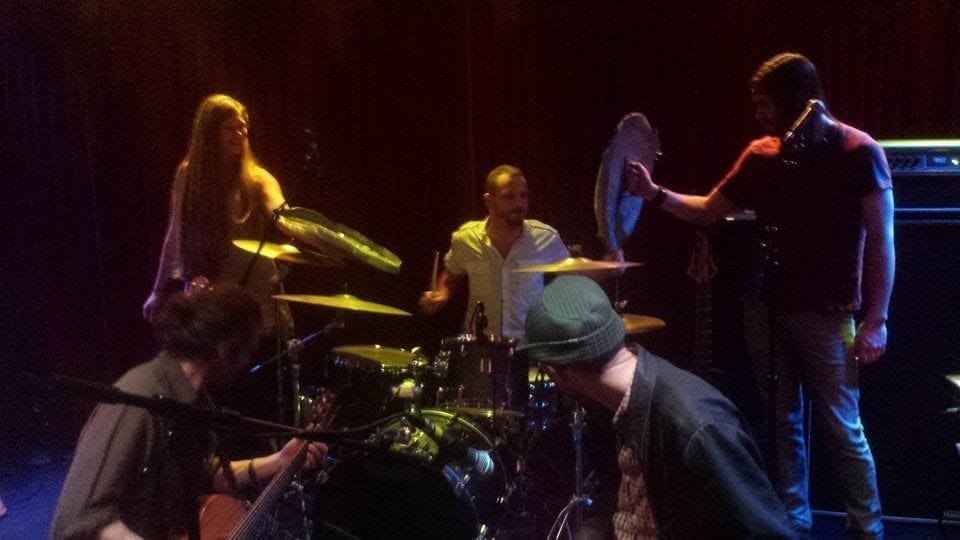 I expected there would be an opening act, and was not disappointed to hear Dylan Seavey and the Gentleman and watch them put on a very worthy performance. The night was off to a great start, and it was only a matter of minutes until Adam Ezra, Jeff “Turtle” Goulart, Josh Gold, Alex Lee Martin, Francis Hickey, and Corinna Smith would stake their claim on the stage. In typical fashion, all of the members of the band were hanging with the crowd, saying “hello” to friends before the show started. In reminiscing, we all cursed the weather in unison…but none of us were getting hung up on it tonight.

It didn’t take long for this crowd to be on their feet…with a solid mix of fan favorites and some more recent material…the songs had a fluid groove. Hearing Francis break out the funk with bass guitar on “Like A Thief” and “Hippie Girl“, from the band’s most recent CD, “Better Than Bootleg 2” it clearly garners the attention of the dance floor…and once you are there, it’s hard to find a reason NOT to stay there! Whether it be watching Adam, Jeff, and Alex storm the percussion and drums on “Devil’s Side“, or seeing Corinna splitting the horse hairs on her bow as she saws away at the fiddle on “Steal Your Daughter“, or staring in awe as Josh throws some truly remarkable stuff at you on “14 Days“…Adam Ezra Group invites you to absorb the music!!!
Check out Brian Willis’ review of Better Off Dead at the 8*10 in Baltimore MD.
As a fan, and a friend that has followed AEG for about 14 years, I have had the pleasure of seeing the band mature and grow. There is a simple, yet powerful display of this when you hear six part harmonies on “The Toast“, or the storytelling that mesmerizes you in songs like “The Portentous Beginnings of Daniel the Brave“, “Miss Hallelujah“, and “Soldier“…the last two stemming from their hugely successful “Ragtop Angel” CD. The beauty of this band is their humbleness. They play because they enjoy it….and they play because WE enjoy it. They truly WANT you to become a part of the celebration of moments…something that Adam speaks of at a majority of his shows while he interrupts his own song, “Burning Brightly“, by opening up to the audience with whatever is on his mind lately. All the while…the music still plays, as if it is a backdrop to the positive energy that will envelop you by the end of the song.
The Living Room reopens in NYC.
After the explosion of cheers as they finished “The Devil Came Up To Boston” (the lovely profane riddled parody)…and after a birthday boy in the audience took to the stage and joined Jeff on percussion during “Scandal” (Ode to local political corruption!!!)….it was nearly time for Adam to say “Goodnight” to the crowd. But  Adam had one more trick up his sleeve. In skipping all the bullshit formalities of an encore…Adam has recently been unplugging all of the instruments and walking into the crowd with his trusty acoustic guitar and his band mates by his side…encouraging the guests of the evening to circle around him, as if to sing songs by the campfire. Tonight….it was a special treat! He started with “Ease It Down Right“, from “Daniel The Brave“, and followed up with “Another Sunshine” from my personal favorite CD, “View From The Root“. (There was actually a third and final song….but, as tradition, Adam likes to surprise you with something NOT so traditional…guaranteed to have you talking about it the next day!)
So, as our night began….it will also end…but with a contentment that you tend to feel each and every time you witness Adam Ezra Group.
Bittersweet.
Check out the LMNR FB page for updates and photo galleries and  more!