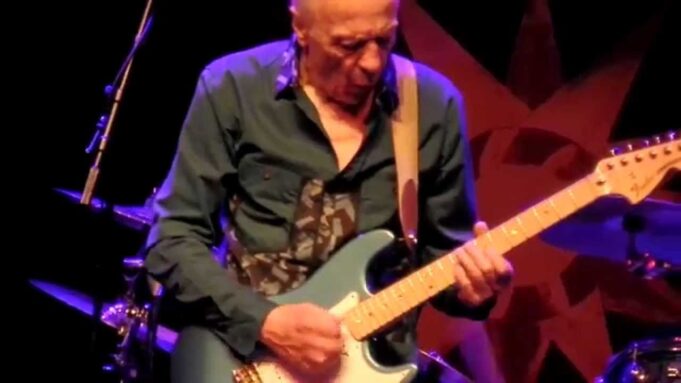 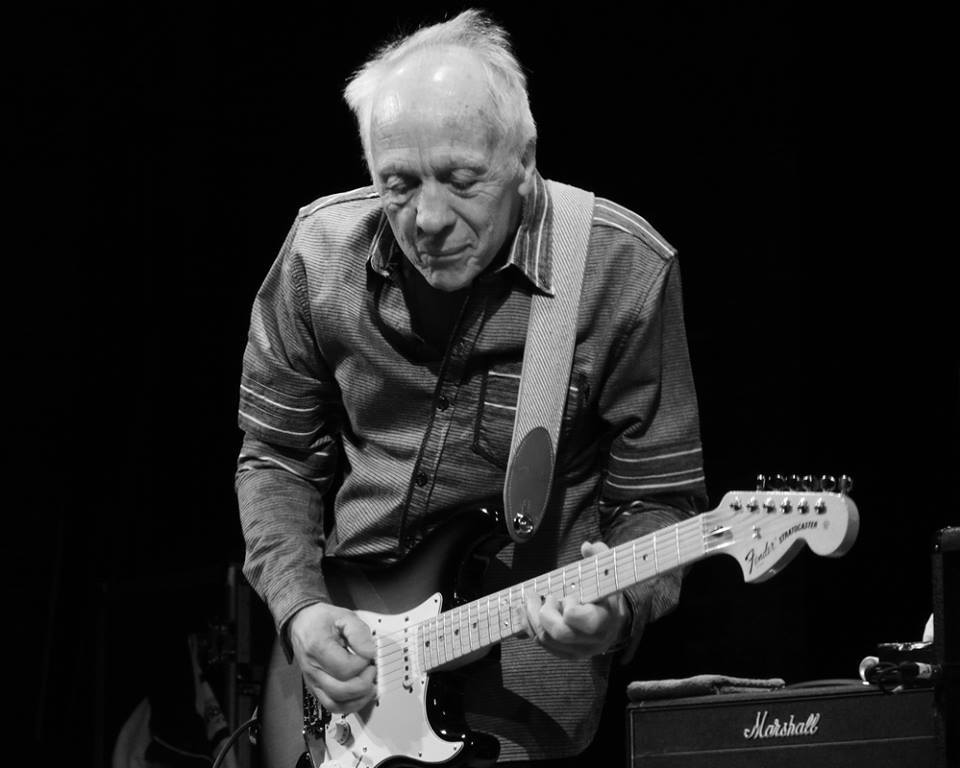 Born in South East London 1945, rock guitarist first achieved success with Procul Harum in the late 60’s, and then again as the bandleader of his own power trio the Robin Trower Band.  Trower grew up in the seaside resort of Southend-on-Sea, Essex. In 1962, Trower formed a group that became The Paramounts, later including fellow Southend High School pupil Gary Brooker. The Paramounts disbanded in 1966 to pursue individual projects. During this time, Trower created a local three-piece band called ‘The Jam’ – not to be confused with the later group with Paul Weller. Trower then joined Brooker’s new band Procol Harum in 1967, with whom he remained until 1972.

short-lived combo Jude. This outfit did not record and soon split up.

Trower retained as his bassist Dewar, who took on lead vocals as well, and recruited drummer Reg Isidore (later replaced by Bill Lordan) to form the Robin Trower Band in 1973.

Review of Robin Trower at The Egg

Starting with: “Somebody Calling,” the 1977 funk opener from In City Dreams; then, “thank you very much, thank yooou!” the now-familiar call as heard on every one of Robin Trower’s live albums released in the last couple of decades.  Time was when all we had was the 1975 LP, barely forty minutes long.  Next, a couple of latter-day numbers and then, “thank you very much, thank yooou!”

And now: “Daydream.”  Life is good!  While anyone might know Trower’s couple of classics from the Bridge of Sighs album, this song, from the first album a year earlier, may well be the true fan favorite.  Another 70’s -style art-rock, guitar-hero, space-rock anthem like BOS, and usually drawn out to ten or so minutes, this has always been a showcase song for the blues-based player’s lyrical solos with power chord sections, and poignant, almost tearful long-sustain notes toward the end.  This is a crowd pleaser, even though it wasn’t so much a radio song.  It has probably been in the set-list for every tour and show of Trower’s career.  And not a note of his trademark wah-wah, that particular tactic so often used to such good effect from the next year onward.

What we get next is the perennial favorite, “Lady Love.”  At this point the listener can rest assured that the young singer, Richard Watts is up to the task.  With a voice suitably reminiscent of Jimmy Dewar, throaty and airy, while

also coming in a bit higher like Davey Pattison, the voice works perfectly well for the material, current as well as nostalgic.  The drummer, Chris Taggart, another young-looking fellow, holds up (or down) his end just as admirably.  This is basically the “Roots and Branches” band, from last years’ blues covers album, though the pair has been in the studio circle since 2000.

“Day of the Eagle” and “Bridge of Sighs” come along next, paired as with the original album order (always a treat)…  this is, of course, the other absolute must-have in the set, and we’re maybe half-an-hour in, so what remains might be interesting.  “Thank you very much, you guys are great.  Thank yooou.”

“That’s Alright Mama,” the classic number, is done bluesy with a swang, but lasting for only two or three minutes before giving way to a 1975 track from For Earth Below.  Part single wanna-be and part ‘deep cut,’ this one that comes out of the vault less often than other classics.  It takes a strong vocalist to deliver on this one, as it was such a Dewar spotlight that one might expect them to leave it alone, but it’s obviously a fun one to play- and the gent pulls it off well.

It would seem that the house, The Egg at the Empire State Plaza in Albany, is pretty good to their press-passers.  I’m at third row, left of center, pretty perfect for a full view without being too close.  The lighting is about perfect,

with Tower in ‘real’ light while the others are held in hushed blue.  All is plenty visible, again without being ‘too much’ or too bright- in fact, all is in perfect balance: the light, the sound, the volume.  This is not really a light-show sort of event anyway; in fact an open venue without seats might be better for this solid-rock blues music.

This is my fourth (or third-and-a-half) time seeing Robin Trower.  The first time was at the old Katina’s with his 80’s band, the pretty polished four-piece.  The next was at Pearl Street with none other than Jim K opening with Guy DeVito & Billy Klock as Little Jimmy and the Bad Boys.  Finally, I drove down to CT somewhere to see the Liv Browne lineup in about 1990 or so, and my buddy got caught recording (!) and we all left.

Little Bit of Sympathy generally signals that the end is near.  After an obligatory pause for the band to step off and back as the audience stands, they return for “Too Rolling Stoned.”  Couldn’t forget that one!  Just as we hear a little something different and interesting, the Strat-master brings it back to the old, familiar coda; as the applause and the atmosphere settle, the hammer-on intro to “For Earth Below” oozes its way in.  Another ‘deep cut,’ and one that Trower just started resurrecting in the last decade or so, the vocals here again impress with their Dewar-ish delivery (and yet not overly much).

All in all, this is balanced show from mature and balanced artist.  The total time might have run just about an hour-and-a-half; not too long and not too short.  Nobody got carried away like back in the stadium days of the 70’s, but nobody fell asleep either.

Billing as the “Bridge of Sighs 40th Anniversary Tour” allows the artist to call up material from his entire catalog without the need to support a ‘new’ album.  And so the material, as with the band and the sound, is all in good balance.