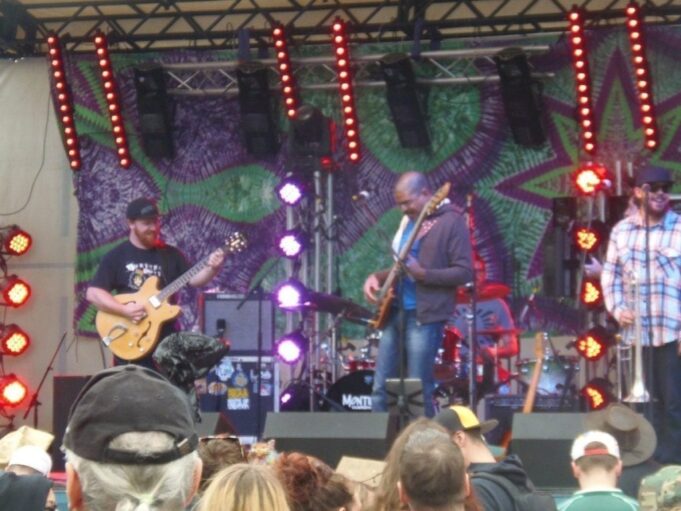 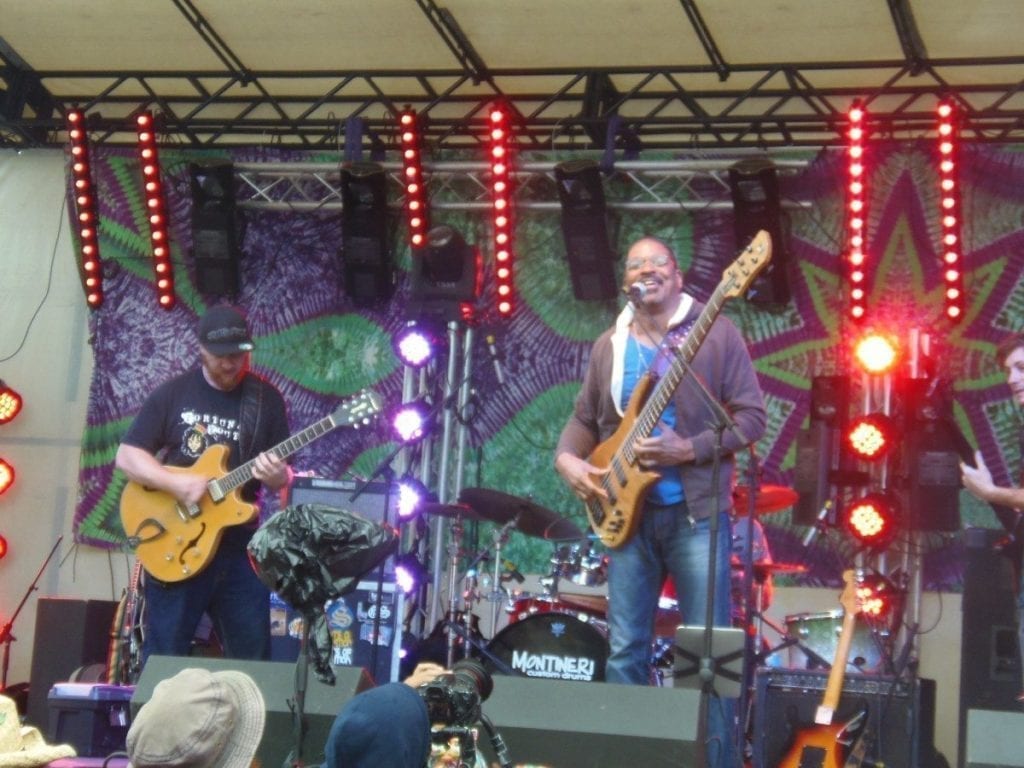 We have just recently returned from an awesome weekend at Wormtown in Greenfield.  What an amazing festival!  They must have had over 100 bands on four stages and in two cabins, and just an amazing amount of fun and love and music was shared by the thousands in attendance.

There seems to be a theme that develops at the Wormtown fests, something you just feel- sometimes it’s funk, other times it’s been bluegrass.  This festival the theme was clear:  Oteil Burbridge was the Artist at Large and he sat in with 11 bands over the weekend.

Arriving on Friday afternoon myself I walked from my car with all of my clothes still in my hand when I ran into the Vernville stage with Flux Capacitor on it.  They were visiting Wormtown for the first time, and they were in the process of committing bloody murder on stage when I arrived at Vernville.  I mean they were killing it.  The jams were in mid flight, and it wasn’t until the jam broke and they set into the vocals “The Judge Decreed It, the Clerk He Wrote It” that I realized that they were playing Viola Lee Blues.  It’s a testament to the quality of their jam that a song that I have heard hundreds of times wasn’tobvious to me, as in their capable and creative hands they had twisted it, turned it, and set it into the stratosphere.

I got a report that Lovewhip kicked it off in one of the cabins on Thursday night.  They appearently had some special guests including the sax player from Goose Pimp Orchestra.  They have grown really accustomed to that THU night kickoff party that they do in the cabins, and festy attendees are making it a habit to gather there at the start of their Worm experiences.

Roots of Creation with Oteil Burbridge at Wormtown festival SEP  13 2014 SUGAREE- Main Stage Despite the roughness of the sound in the beginning, stick with it. The solos and other aspects of this video make it worthwhile, the sound mellows out after a few minutes.

To continue on the Oteil theme:  I heard Roots of Creation start as the drops started to fall from the sky on Saturday afternoon.  Some bands, especially at an event like Wormtown, are hard to pin down- but the first moments you hear Roots of Creation you know it’s them.  Oteil joined them for an amazing version of the Grateful Dead’s Sugaree.  Everybody took a turn on the solo, and they explored every nook and cranny of that song.  After Burbridge departed the band continued to kill it, and the crowds stuck with them despite the increasing weather.

Bill Carbone was the special guest drummer that day, and he not only managed to fill Mike Chadinha’s role without a problem, but also brought a bit of his own energy to the table, too.  I asked Brett Wilson how it came about that Bill Carbone sat in, how the band felt about it and how it was different than Mike. In response, he said, “RoC had a blast jammin with Bill Carbone supporting Max Creek this year multiple times and at Camp Creek he invited me to sit in with his super jam (Scott Murawski, Ed Mann, Bill Carbone, Beau Sasser), which was so much fun. So when we needed someone to take the throne at Wormtown (since Mike had a wedding obligation), he was a natural choice. It didn’t hurt that he was already going to be there either. I have been a fan of his drumming since the Miracle Orchestra days. All everyone in the band kept saying after was “Pocket” Lots of smiles from the worms groovin’ and Oteil on bass. I’d say it was one of my festival musical highlights of the summer. Although no one could replace Mike’s ten years of touring with the band and Spicy Chorizo infused Reggae/Rock Rhythms, Bill added his own flavor and crushed it with no rehearsal.”

The rest of the set filled out with Roots of Creation classics including Oh Lord which stuck out to me as a great version. The band in addition to Brett Wilson on lead vocals and guitar had the standard guys other than Carbone on drums: Tal Pearson on keys, Andrew Riordan on sax and samples and keyboards, Nick Mini on bass, and Billy Kottage on trombone. The horn section vibe  was a full frontal assault, and it helped to frame this show in the big festival perspective that we were all expecting and needed with the rain growing steadily more hearty. 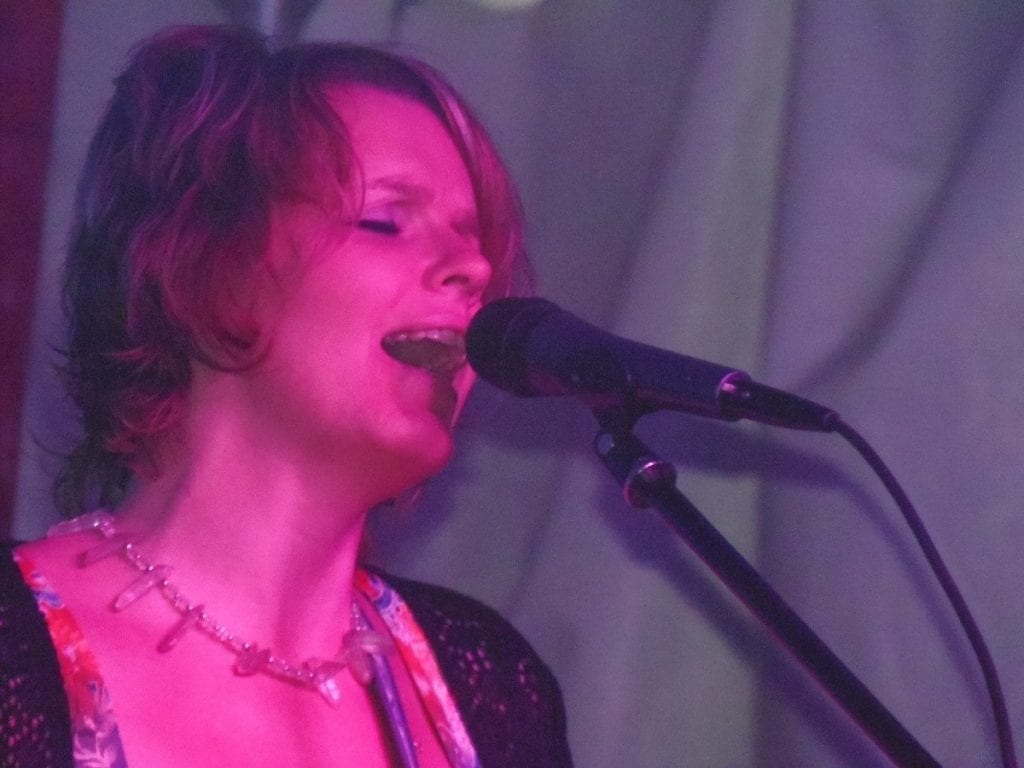 Saturday evening found me back at Vernville for the second Wormtown appearance of Jamestown New York’s Big Leg Emma.  The rain was steady, but declining, and there was a crowd forming for them.  Burbridge joined them onstage for Sing to Me and the next 14 minutes of music that came off that stage could be describe only as sublime.  Each band member took it to new heights with a 60-90 second solo from drums to guitar to Charity Nuse on a vocal solo.  But the highlight of the instrumental section was a bass solo turned into bass battle between Burbridge and BLE bassist Miguel Morales.  Back and forth between Oteil and Morales, amazing licks, rhythms and harmonies on their axes.  Morales seemed to stick in the funk slap realm, with Burbridge hanging in the bass chords and harmonies and vocalizations world for which he is famous.  It was amazing, and I am so happy to have caught what was definitely a moment.  That’s what this whole Artist at Large concept is all about, no? 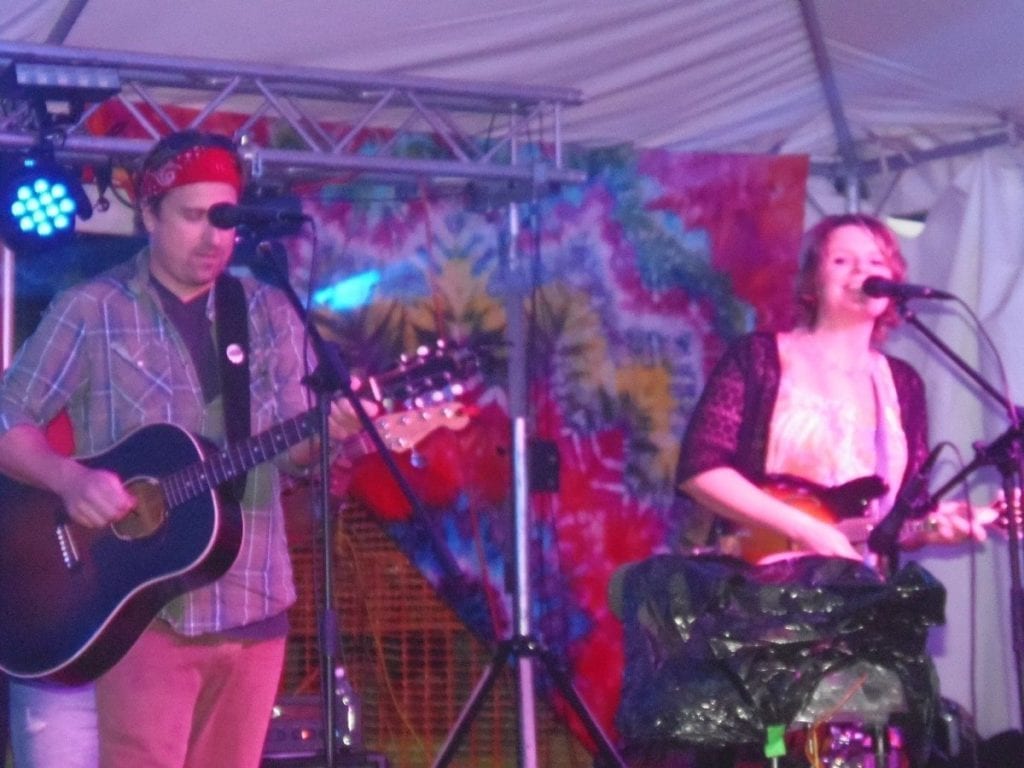 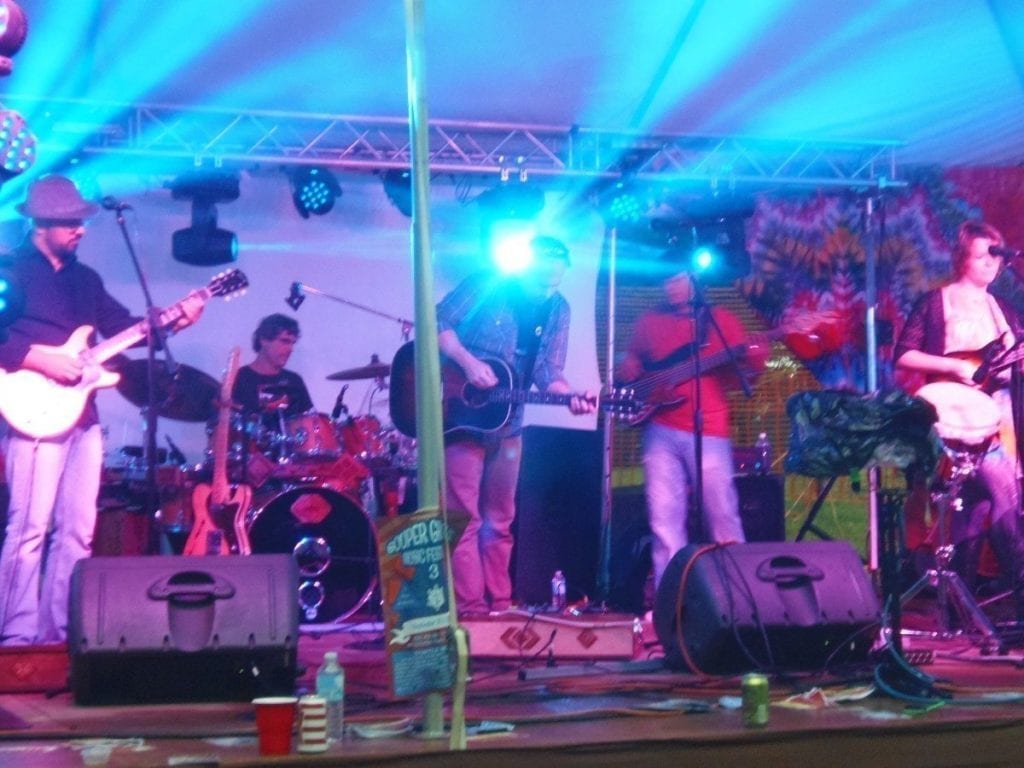 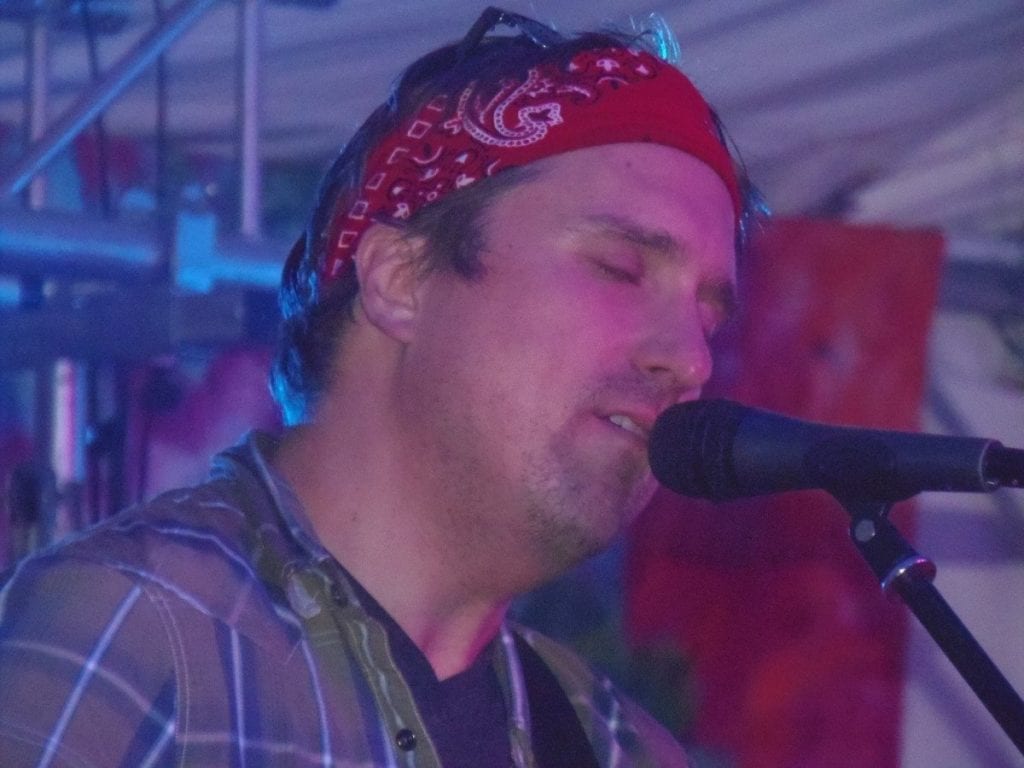 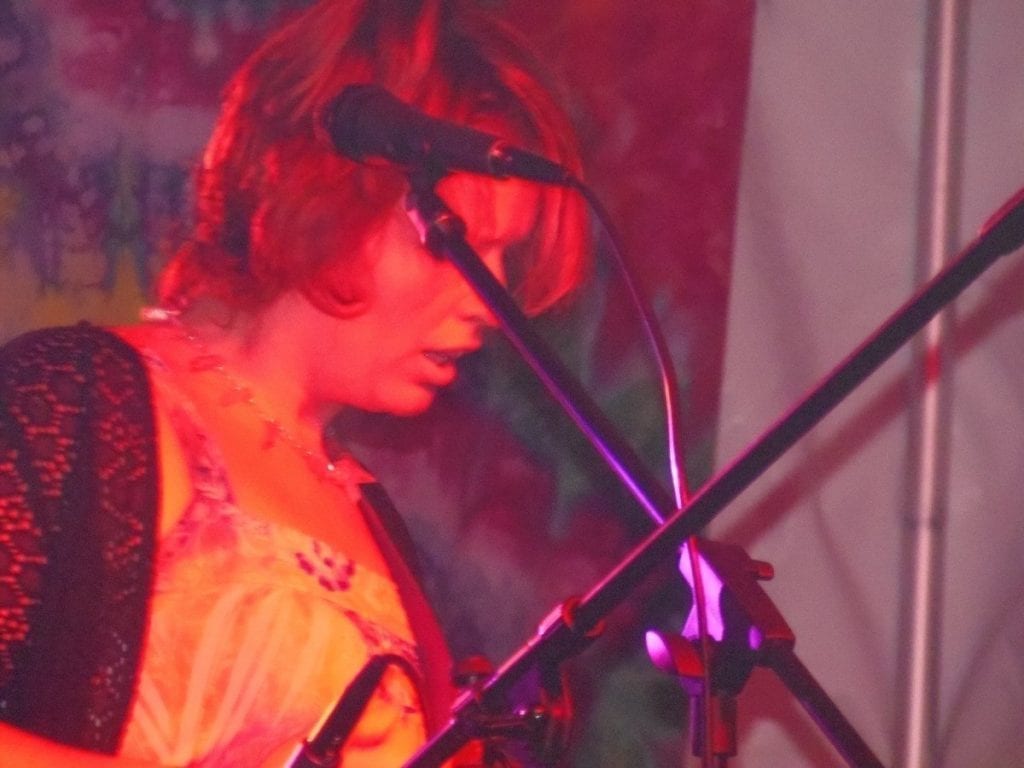 Sunday afternoon Start Making Sense took the stage for the first time  at Wormtown. It did take them a minute to warm up, as you could tell it was early in the day for them. 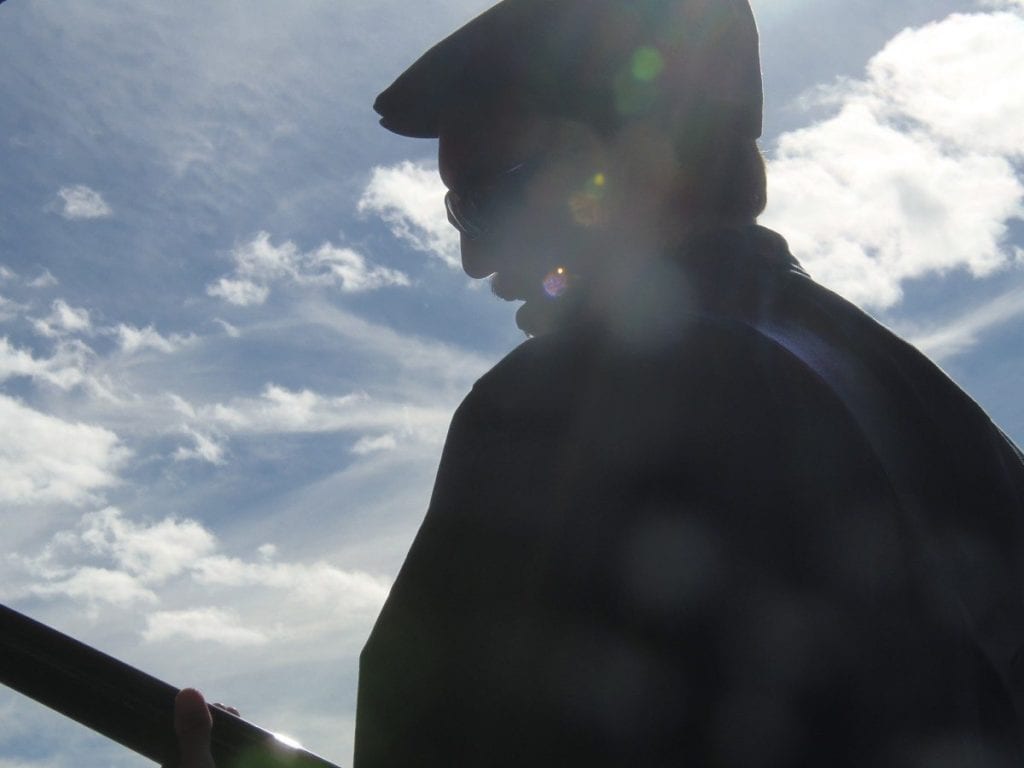 After a few songs the band was warmed up, the sound was dialed in, and the field started to fill up fast. My friend overheard someone run up and scream “This exceeds my wildest expectations!”

Now I’ve seen SMS now about ten times including last weekend in Boston. The band is ridiculously awesome. They are also bringing something to this festival that few other bands are- a stage show. Now, hear me out, this is not an indictment of other bands- The Dead didn’t do a stage show either. Start Making Sense isn’t choreographed to the nth degree, either. But having someone in costume- not the whole band but the lead singer Jon Braun as David Byrne, is awesome. During parts of the show the band moves as one, and the energy level coming off of Braun is infectious and undeniable. 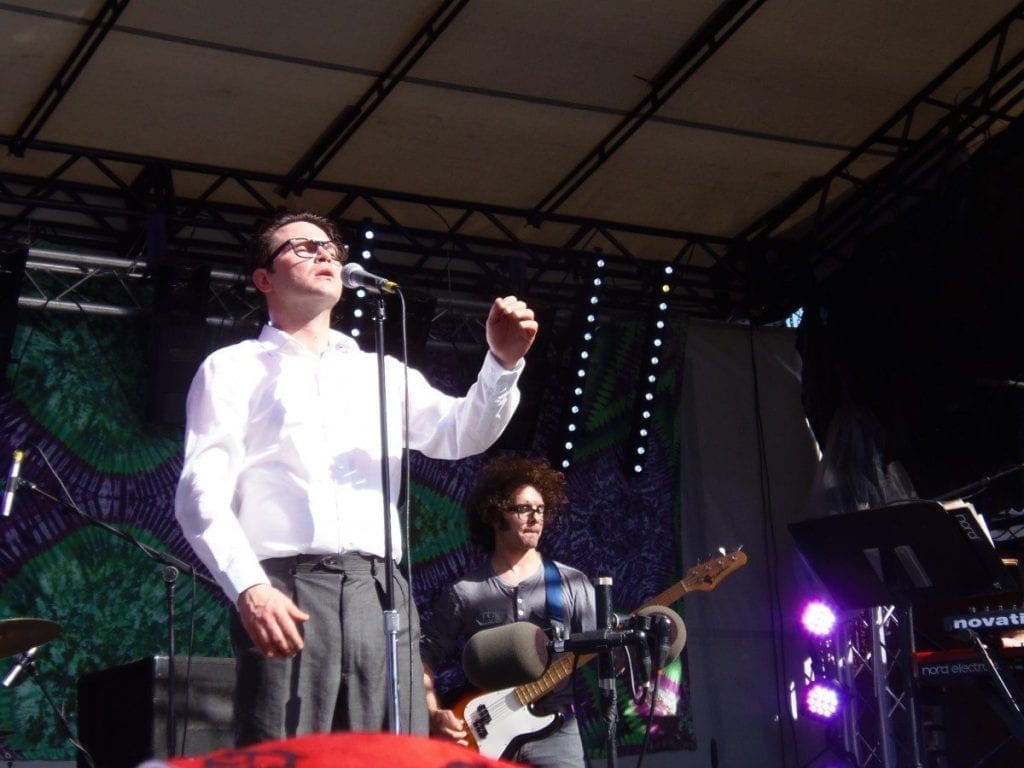 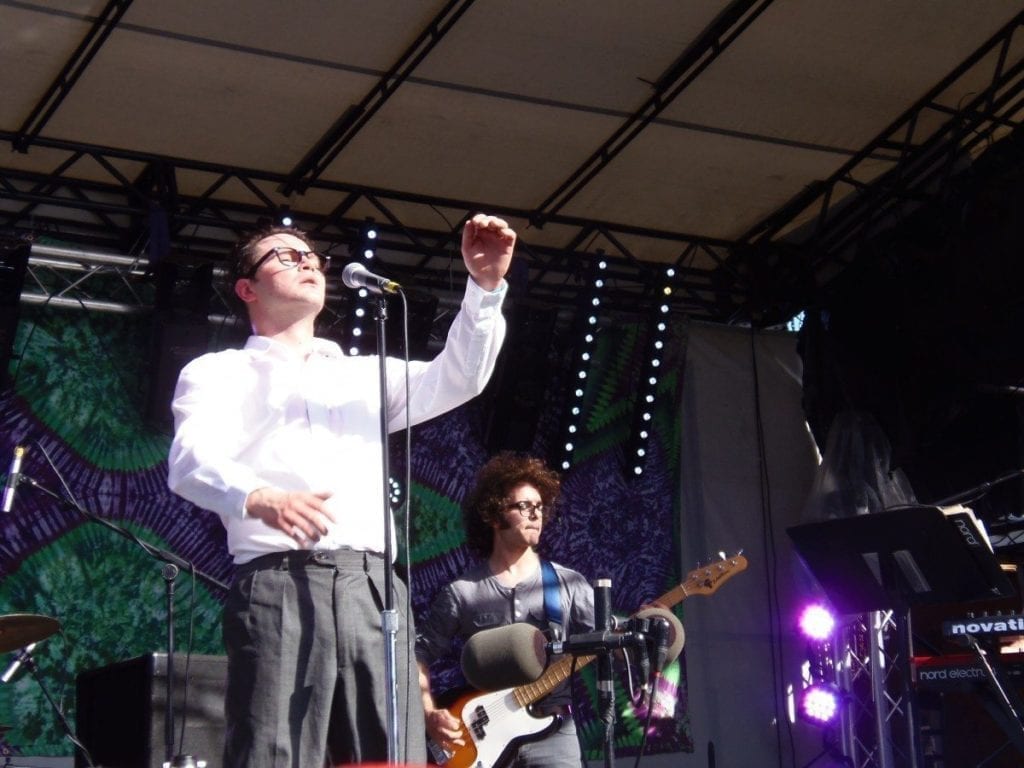 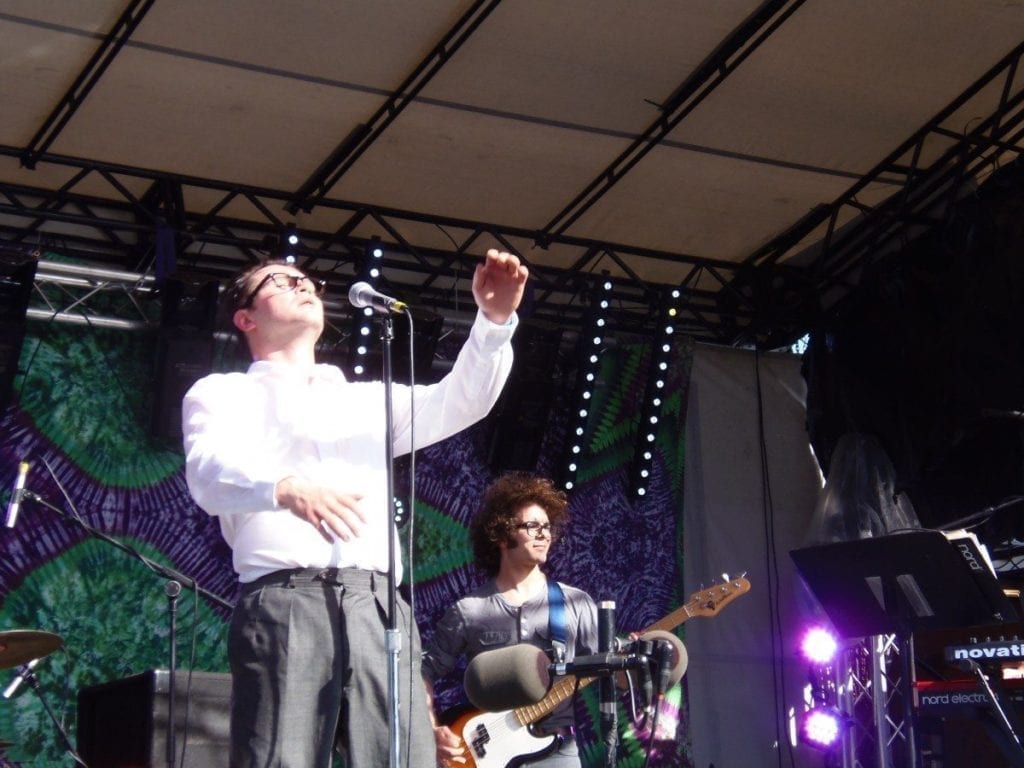 Start Making Sense One in a Lifetime Wormtown SEP 14 2014


Start Making Sense set list: Thank You Angel, Slippery People, And She Was, Cities, Born Under Punches (And the Heat Goes On), Naive Melody, Psycho Killer, Making Flippy Floppy (with guest drummer Jon Morgan Kimock), Nothing But Flowers, Life After Wartime, Once in a Lifetime, Crosseyed and Painless


This portion of the Review was written by guest contributors: 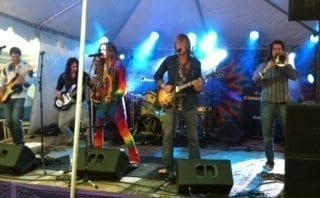 My biggest pleasant surprise of the weekend was Gang of Thieves, who played the Riverworm stage Friday at 2.  I don’t think I’ve seen a group more into what they are doing in a long time.  These guys had energy and passion!  Even when they weren’t playing, they were grooving (I loved the trombone player Nate Reit’s facial expressions as he danced through the set).  But it was main vocalist and violin player Michael Reit who stole the show. My God, could he play, and sing, and dance, and jump! The band’s brand of funky, dirty rock and roll got me dancin’, but mostly had be enthralled. Can’t wait to see these guys again! – Kara Kharmah

We will be adding reports as they come in. There is a ton of videos and photos and reporting that will be coming to you on this page, check back in often!

Be sure to check out the latest News article on the John K. band performing their new EP “Liquid Silver Live.”