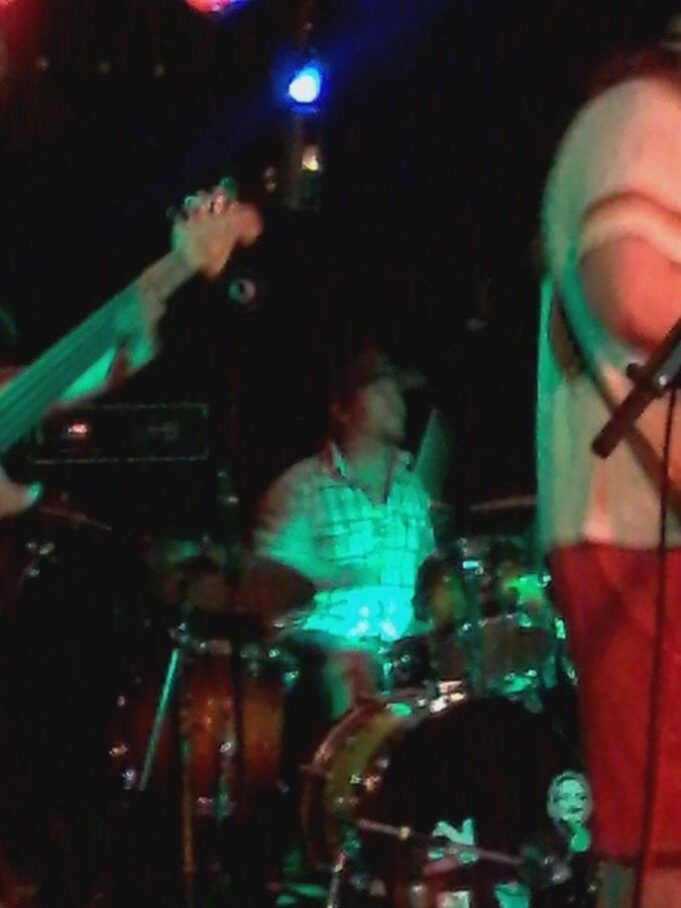 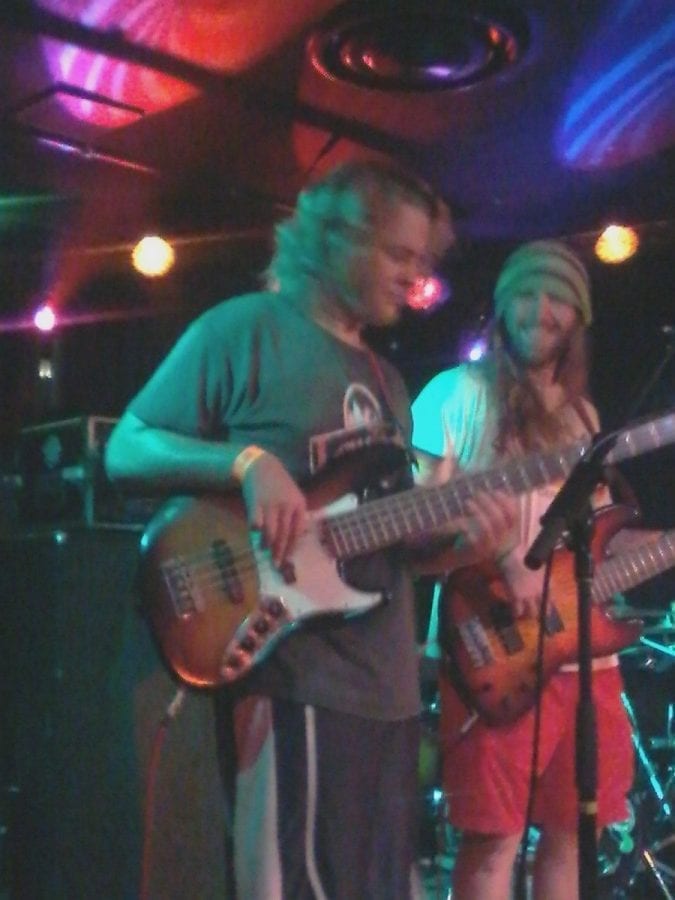 This is Art- Living Art.  Monsta’ Party brings the funk and does it with engagingly creative and almost entirely improvisational energy.  I’m pretty sure there’s nothing else like them.  Comparisons might be made to 70’s fusion, but only inasmuch as unbridled adventurousness reigns supreme, and not because this music necessarily ‘sounds like’ that post- Bitches Brew melting pot of skill and styles.

I got myself a double dose of Monsta Party this week- almost triple, in fact… I had just seen them at Whiskey Dick’s in Bondville VT on a sunny summer Sunday, then Tuesday at Nectar’s in Burlington and again the next night at Putnam Den in Saratoga Springs NY.  These venues are both frequented by parent band Twiddle; in fact fellow spin-off Gubbilidis sometimes shares their calendar with this new Twiddle-related offshoot, but this is a whole ‘other animal entirely.  The band at hand is half or three-quarters of Twiddle, depending on how you slice it, and much closer to the funk-jam improve origins of the parental unit.  Gubbilidis, of course, is the pairing of singer-songwriter guitar-wiz Mihali Souvalidis with bassist extraordinaire Zdenek Gubb.  In Monsta’ Party, Zdenek and Twiddle drummer Brook Jordan join with Billy “Billstock Bangstafunk” Comstock and Ben Bivens, bass player and guitarist for another Vermont band, Brickdrop.  So, yes, this band sports two basses.

Here’s where it gets interesting: Billy was Twiddle’s original bass player, so what we have here is a jammy summit of sorts, with three of five possible Twiddlers in the mix.  And the second of these two nights, they even brought along keyboard player Ryan Dempsey, from -you guessed it- that other band! 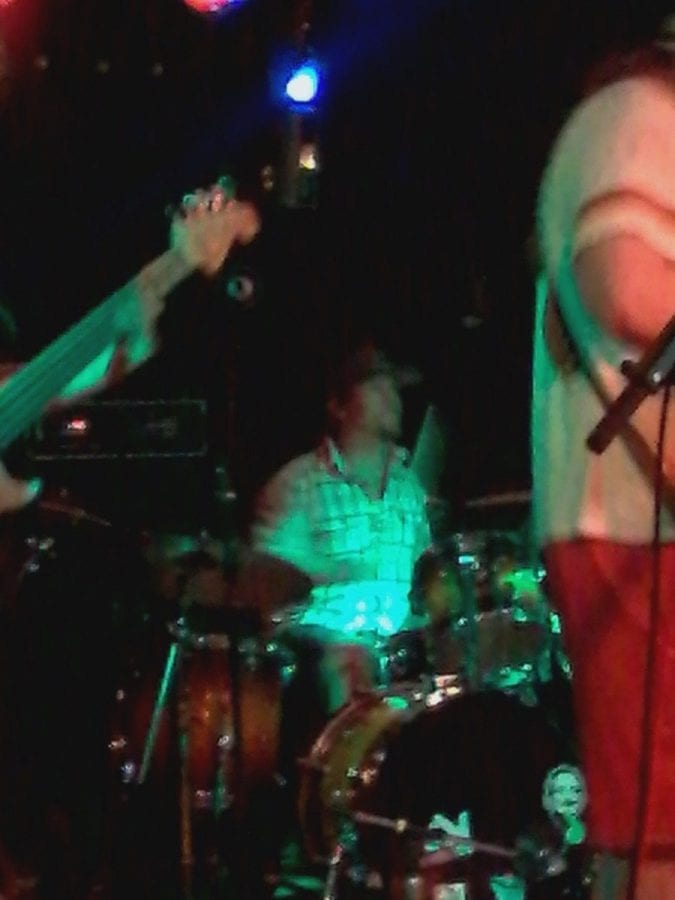 The first of these two nights, at Nectar’s, damn near turned out to be a rager.  Anything Twiddle-related is sure to pack ’em in at Nectar’s; I have actually been in fear of the roof caving in more than once when Mickey and Friends or Gubbilidis had sessions there.  Having seen Monsta’ Party their very first night together, when they launched into unrehearsed jams at the Fishtail in Bomoseen VT, and having missed the six or eight further experiments they’ve conducted in the meantime, it is apparent that the improvs are becoming compositions… almost.

As Zdenek explained it to me one night, they have some basic forms that are the basis for improvising.  The advantage of this approach would seem to be complete freedom to go off the charts while minimizing the potential to just fall apart.  They will often laugh together as a piece ends, as they are more aware of or sensitive to imperfections than the average listener is likely to be.

So, this night at Nectar’s really seemed to catch them at their best, with all the planets in alignment, as it were.  They are now warmed-up or rehearsed-in to their music so that they can begin to let muscle memory take over to some extent and enjoy flexing with less conscious thought.  Plus, the room was charged with enthusiasm.  Everyone in the door at the start was there to see this band, some for their first time.  The buzz has been building.  The crowd had about doubled by the time they reached the half-way point, some arriving early for the following Dead Set, but many coming in just because they liked what they heard from out on the street.  The guys were still standing more towards each other than facing out, although the next night they seemed to be more aware of the performance aspect of their art- or maybe one of their Mom’s gave ’em a talking-to. 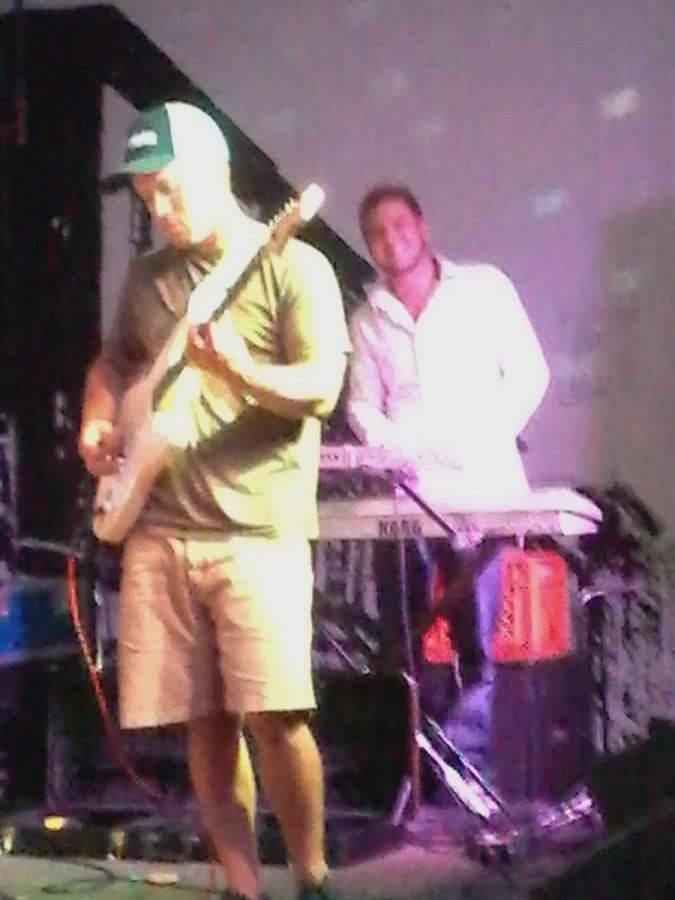 By the end of this show, though, they were all charged up and obviously engaged in the reciprocal flow of energy, feeding off the audience and bringing it back.  Ben, the only non-Twiddler in the mix, was especially demonstrative of this two-way flow.  I thought I was witnessing a ‘coming out (or up)’ in the guitarist’s manner, as he has progressively come more to the fore, but he assures me that it’s all about the energy in the room.  Still, though… we saw a lot more lead-work and solos in this show; at first he had kept it all atmospheric and stayed with artful backwashes and almost-ambient supporting sounds.  At the very end of their set tonight, the guy got downright feisty as he hollered the band into what is becoming their closing number, a jammed-up “Electric Avenue.”

The next night at Putnam Den in Saratoga Springs what a bit of a different story.  This is a less-familiar venue and no more Twiddle-centric than any other, and on a Wednesday, it’s going to be a crapshoot whether many folks will come in the door.  The place probably got to about half-capacity or so, but after the vibe and energy of the previous night, it would be easy to understand how the band might come away feeling like a kid who has unwrapped all his presents, and… hmm, well,,,

Not that the music was in any way lacking, especially with the sometime-addition of keyboards.  The second set started off with friend Bud playing harp so that, along with Ryan’s soulful organ, they took on an almost War-ish or Weather Report -kind of sound. 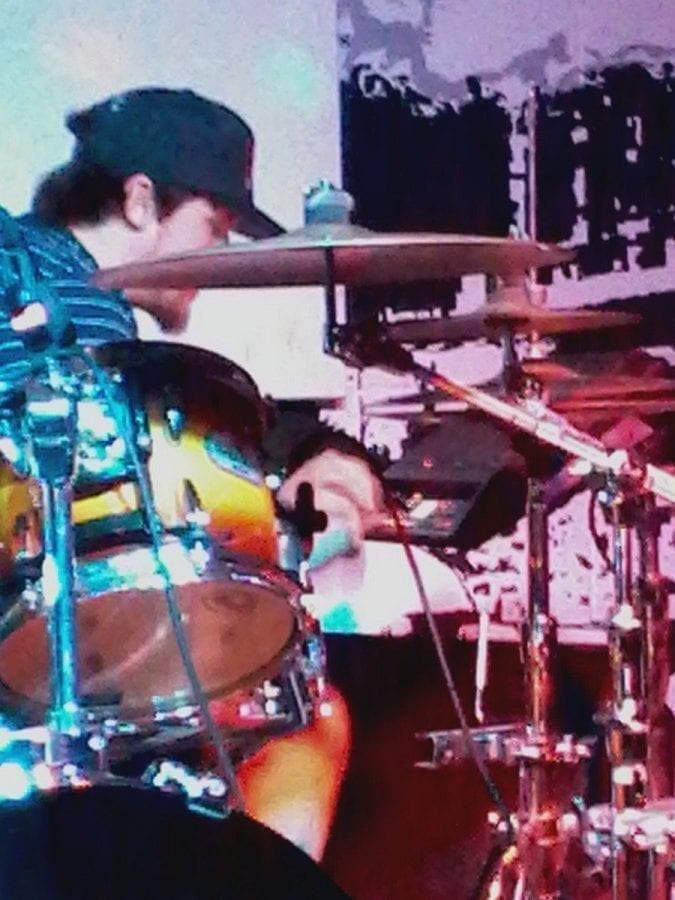 They rocked and fused their collective way through a solid set, playing to an enthusiastic house, however full that house might have been.  All present were clearly enjoying this fusion of doubly-bassed jazz and instrumental rock.  The guys are obviously enjoying themselves, too, as they glance back and forth at each other and out into the audience to read their cues on the fly.  A quick hand-signal between Zdenek and Billy lets them know that they’re ready to swap roles between the ‘bottom’ and the ‘top’ or lead bass-line.

The show ended with a much shorter “Electric Avenue” than the night before, and the guys seemed less-favorably disposed to giving up an encore, but the crowd insisted.  They made us work for it a bit, but it was worth it… of course.  They jammed for another ten or so minutes before they were reluctantly let off the hook.  Those fortunate enough to have made it here this night all seemed satisfied and excited, whether they were ‘friends’ or familiar with the band, or first-timers come to check it out, or even strays and stragglers happen-stantially wandering in upon hearing this original music.

I do believe this is Art.  This is Living Art.  It is interesting, engaging and entirely original.  Even that one version gets a treatment that makes it feel almost unfamiliar, but only for a couple of minutes before the listener realizes that this is Monsta’ Party’s good-natured way of saying ‘goodnight.’