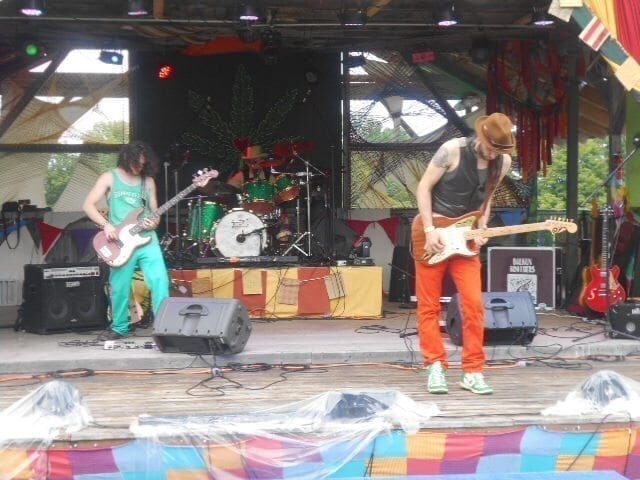 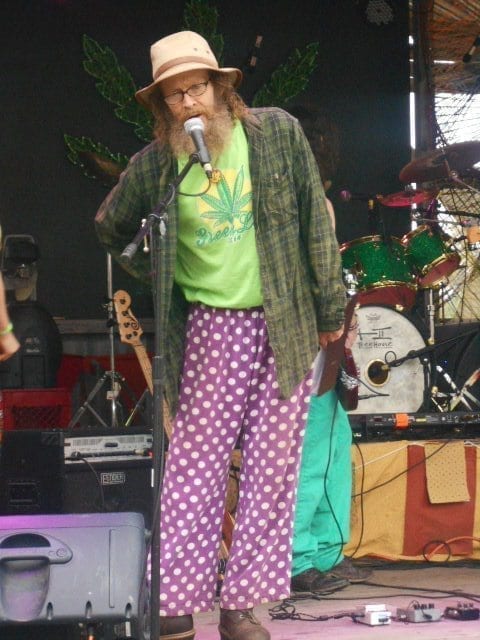 Now, that is a great idea!  What I thought was a Native American drumming troupe is playing between bands at the 24th Annual Green Love Festival on Harry Brown’s Hill in Starks, Maine.  They are on the ground in front of the stage, sounding much better than the house music!  The sound system for the bands is fine, but the recorded stuff… not so much.  This Arab percussion ensemble sounds great, especially when the next band up plays in as a bit of warm-up.  First the bass played along, just a bit, then the guitar, then a little of this and that, like some horn, maybe a sax. 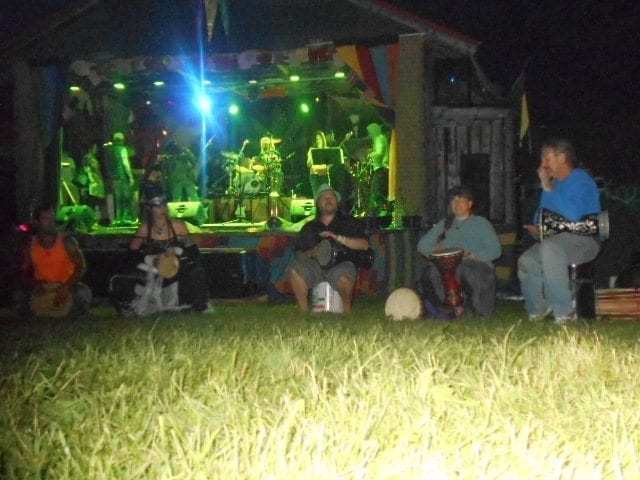 But they didn’t take over; Dark Follies, the precussors at hand, played on unhindered.  The overall effect, spontaneous and enchanting, was just plain sweet.  Dark Follies, from Portland, who are actually a variety show a la traveling minstrels, normally have a violin and flute in their group, but tonight they are going with just percussion.

The festival started at noon with Terrafunk, featuring Nicole Henley at the Tiny Mic.  They played about the smoothest set I’ve seen from them yet, which is no small accomplishment, as smooth is what they do.  They glided through a solid set of Motown, soul, and R&B material, much of it tending toward less well-known (but no less classic), and including a couple of specialty numbers like “Take Me to the River.” 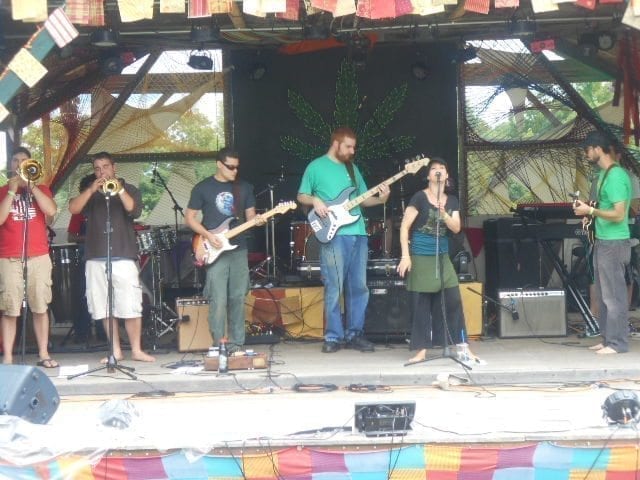 The second act, Jordan Giangreco & Friends, sounded real nice… from my tent, that is!  Rain started just before the band, and I had left my futon on the roof of my car.  I scurried back to my camp-site and finished moving in; once I laid out the futon, and having come up short on sleep the night before (what with driving from Concord in the wee hours) there was nothing for it but to put the padding to use.  This band played nice and easy, just right for lulling one to sleep, so all was right with the world…  I ran into the drummer (Dave?) a little later; I had to chat with him to ascertain whether he had any connection to Dopapod, which band features this guy’s doppelganger on guitar.  I introduced myself, owning up to my transgression and assuring him that what I heard was most pleasing indeed, including sweet singing from Hannah, who I recognized from backstage beforehand, and we all had a laugh as my apprehensions were laid to rest.

Reader’s Note:  Bobbie Davis  Eyes was kind enough to drop us a note,  “The name of drummer in Jordan Giangreco and friends band is Chris Andrews. (He totally looks like the dude from Dopapod) He drums for The Sticky Greens, Brothers Donovan and Desert Rain. Jordan is from The Breakfast, Hobo Congress and Viral Sound. 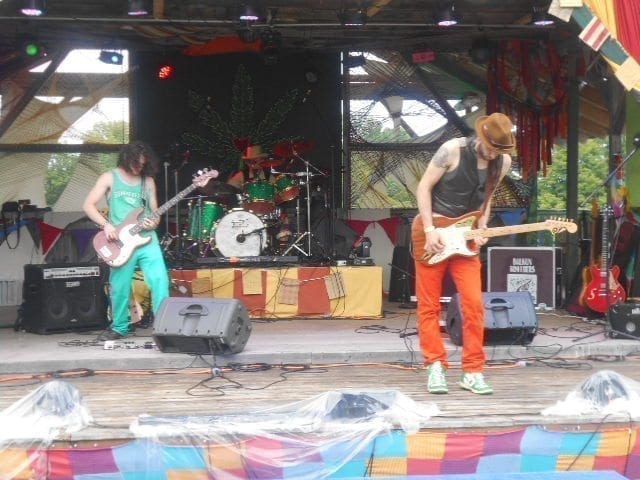 The Balkun Brothers took the next set for Funk Friday, going for more soulful takes on their hard-rocking blues style.  One is reminded of Hendrix, Trower and Stevie Ray, and other Strat-masters, as the leads, licks, power chords and wah-wah effects from brother Steve Belkun issue forth with smooth and sharp, jazz-inflected agility.  With Caleb, their new bass player (who was their original bassist, actually), and Nick, the other brother, on drums, The Balkun power trio showed a lot of drive and style, especially with Steve owning the stage from all directions.  I could easily imagine these guys kicking ass in any of the numerous watering holes and gin mills (and other, more ‘proper’ venues too) which they play in around New York and New England, as well as plenty of other metro areas across the much of eastern half of the country.  Chatting with the guitarist beforehand, he explained that tomorrow’s set would be more true to their primary interest (more blues and less funk) and went on to discuss the philosophy of diversity and the advantages of being able to adapt to a variety of listeners’ needs- all very realistic and reasonable standards for the working musician nowadays. 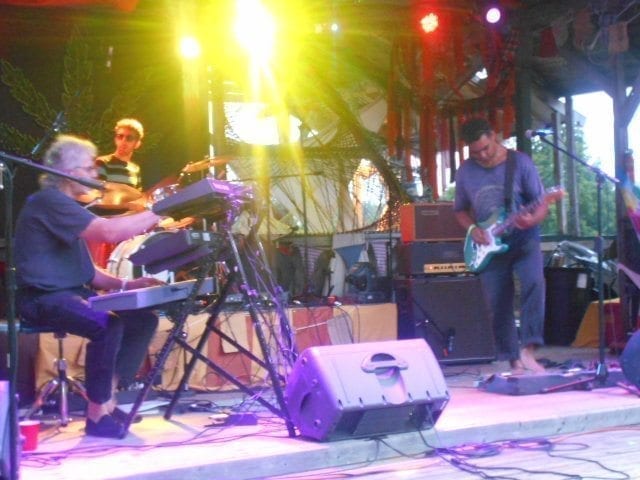 Chronic Funk played a set of highly pleasurable, highly instrumental, funked-up fusion-jazz.  The vocals, sprinkled tastefully around the compositions, almost smacked of Steve Winwood in the latter-day Traffic period.  Another trio, the bass parts were handled by the keyboard player- I had to look several times to be sure; the bass sounded that genuine!

Announcements came at various points, this time with a poetry reading by “Storm.”  As with the opening proceedings, the owner of the property, Harry Brown, a long-time activist and proponent of marijuana legalization (hence the festival’s name: “Green Love”) came onstage with some enthusiastic rallying cries and appeals for activism and social awareness or involvement, calling up paisley days of yore. 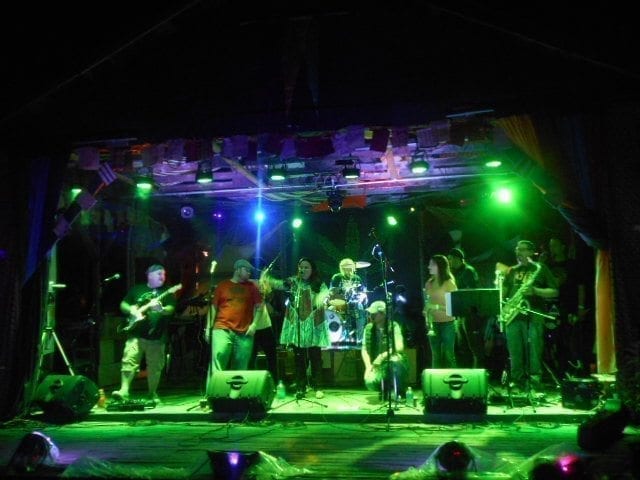 Big ol’ Dirty Bucket was the headliner, or perhaps the piece-de-resistance.   They are many in number, filling the stage with one more than even Terrafunk’s nine bodies, plus the Barefoot Truth Dance Company.  They sing, swing, and rap their way through a massive set of hearty party music.  I mean, REAL hearty music.  Trying to think of Earth, Wind and Fire mixed with Chicago might give some indication of the mass of this monster, but there’s so much more going on here.  I’m tempted to say they’re an “everything” band.

By the time The Bucket done, there ain’t one musical genre that hasn’t been touched.  Except for maybe classical, but even there the comparison can be made to the big, orchestral scope of this beast of a band.  Sure, they stay mostly within the jazz/funk/New-Orleans-Goes-National boundaries, as wide as that sweep is, but at some point in their set any and every type of listener will have heard something to their liking.  Diverse, inclusive, and… surprising!  Even as strains of Led Zeppelin crept into an extended mash-up and the guitarist wailed away like a metal-head, I did not see it coming when they went to the last half of “Stairway to Heaven” – THAT is an accomplishment!

And, on top of all that, …here’s where it gets a little weird… the singer, an otherwise unprepossessing woman with full, strong vocal chords, has certain mannerisms, mostly in her facial expressions and hair-tosses, that seem to channel Ozzy Osborne and Alice Cooper.  Add in an element of Broadway or even Vaudeville by way of the dramatic (but not bombastic) expanse of the arrangements and stage presence of them all, and you’ve got one hell of an exciting production.

Up next, Jordan Kaulback plays mostly acoustic guitar, augmented by loops and effects, and at the end of his solo set he switches to piano for a mellow couple of closers; most of his time was spent on entertaining, up-tempo, often reggae-beat numbers.  His voice reminds one of lots of others; an ongoing discussion during his set was which singer he sounded like at the moment.  Mihali Souvalidis, Twiddle’s talented singer-songwriter and axeman, does a similar thing solo and with his duo, Gubilidis.

New York Funk Exchange, another soulful band with a big sound and seven members on stage, closed out the night.  Two more acts go on in “The Big Tent,” but not for me.  I’m going to bed!  The roster for tomorrow looks just as impressive as today; it is with no small sense of regret that I remember my else-wise obligations for the day.  The plan is to leave my tent-site set up and come back for the last day on Sunday.  I’m hoping to try a burrito from the taco truck- the taco was good enough to get me back, and a couple of other food vendors might have an offering or two for me. 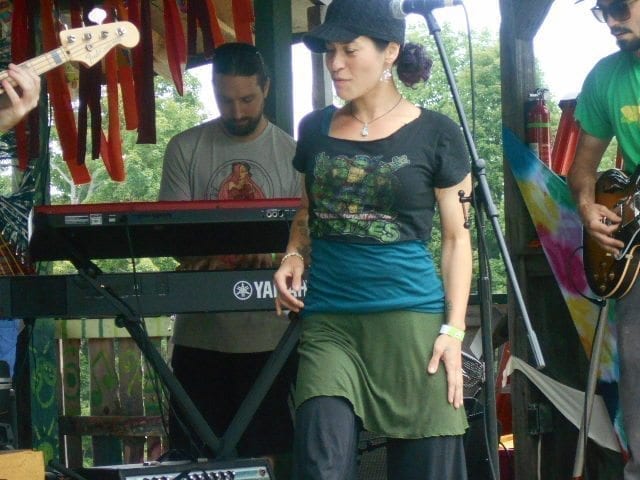 This is only my second festival ever, except for Winterhawk Bluegrass Festival back in the 80’s.  This one may be a fair bit smaller than Disc Jam (it’s more quaint), but it’s no less well-organized.  There are just enough food vendors, and plenty of other retailers, all arranged in a circle, more or less, with openings for passers-thru.  Security seems adequate and then some, and a water supply is placed in front of the medical hut.  Having arrived early, I was able to secure a choice campsite with my car alongside.  I positioned myself up along the very back row, atop “Harry’s Hill,” so that I would be able to leave early Saturday morning and return in the wee hours (some twenty of them later, in fact) without driving thru the grounds and disturbing other campers.

I noticed that there not a lot of pictures being taken.  I snapped a few shots of each band, of course, but whenever I turned in another direction, I just kind-of got the feeling that that’s not how things are done here.  Maybe it’s the wee hint of an empath in me; nobody said anything.  It was just a feeling.  After a while, though, when I was going to capture a double-hoop dancer, I asked.  She said, “Umm, yeah, it’s a little weird.”  Turns out she’s “milady” to one of the fellows I’d been chatting with through the weekend.  Oops!

Sunday’s music was decidedly more acoustic.  This seemed a fitting was to wind-down a weekend festival.  One duo switched between guitars, drums and devices, finally finishing with piano, for a mighty fine rasta-variety show.  The female lead, Hanna Field, played some really fine lead guitar here and there, without ever making that the point of the exercise; this feature was as in service to the overall presentation as the rest.

Some manner of awards were to be given out in the mid-afternoon, but by this time I really had to get packing.  I would have liked to stay for whatever closing comments were scheduled, but… really, I had a five- or six-hour drive ahead of me.  I drove home with a feeling of being charged-up from my experience over the weekend.  While the Saturday of ‘else-wise activities’ took me across the state to hang with another band (the Van Burens at Carmen Veranda in Bar Harbor), that very social activity, and meeting new people at the club, became in turn part of the total experience.  The weekend was one of human contact and connection- possibly even more so than my earlier festival encounter.  Not that other situations are unfriendly, it’s just that the folks at Green Love seemed especially relaxed and ‘mellow.’  I’m sure there must be a reason for that…?

When I first got to Harry’s, I was really concerned about getting just the right campsite, because of my Saturday wanderings.  The volunteers working these events have the job of managing such things- ‘human logistics,’ shall we say?  I eyed a couple of spots and tried a couple of discussions, and I could tell that I was becoming what might be called a ‘tough customer.’  I was uptight.  Hard to imagine, I’m sure.  Well, this one particular fellow got stuck with me for a series of interactions, and I could tell that I was getting on his nerves.  I tried cajolery and thinly-veiled sarcasm, but he had to stick to his guns on a couple of points.  He did his best to do right for all, but sometimes I just keep at it when I ought to relax.  There came a point my needs were met, but before that happened, this guy seemed to lighten his manner and consciously decide that I was OK.  This came from in him and not by anything I did.  This, in turn, opened me up within my own being and attitude, and allowed me to relax and enjoy Green Love.