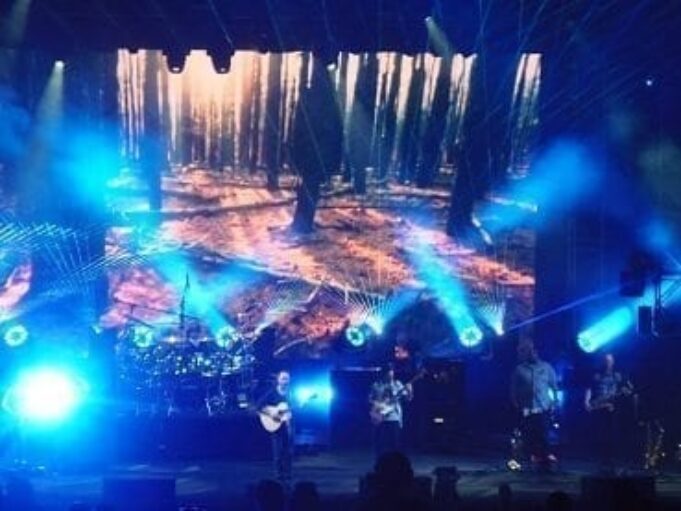 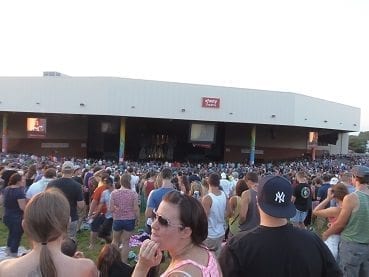 Well, I was trying to figure out how to tell my wife that the vacation we were planning was not going to work out because of some prior commitments I’d made, when I got the email from one service or another saying, “Get Dave Matthews Tickets for this Saturday!!”  Aha, there’s the pillow to follow the “no vacation” punch.  I jumped online, went to Stub Hub, and got two GA tickets to the show in Hartford.  Dave Matthews being one of my wife’s favorite bands, and a band I like too, made for a great date night.

We cruised into the concert area without a problem, and chose a $25 unofficial parking lot not far from the stadium lots.  We chilled with the super cool people who were next to us, chowed down a sandwich and some bourbon, and set off to find our friends in the lot.  They were found easily enough and we had a great tailgate session before heading inside.  We borrowed a blanket to sit on from some friends, and waited in the orderly but lengthy admission line.

So I get up to the front and security dude says to me, “You can’t bring that blanket inside.”  I replied with a bold faced lie, “The Website says you can bring in blankets.” His response was “They’ve changed the policies” creating a beautiful ambiguity with which I could work.  I said, dude it says so on the website that I can bring this inside- and he said that I could go put it over there and get it later.  So I took a step in the indicated direction, and then went straight forward with my borrowed blanket inside.  The security two step completed, we went to go stake our territorial claim.

I’ve been to this venue under at least three different names to see Rush twice, Phish, and now my second time seeing Dave Matthews in as many summers.  It’s a standard amphitheatre bowl-  expensive interior seating and affordable lawn seating.  We chose a perfect spot for listening and viewing and settled in.  We made friends with the genial folks all around us and were stoked for the show to start. 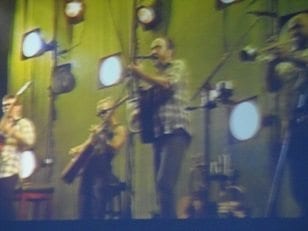 So I was born in 1970.  I’m a man not necessarily in between generations, but we’re older than 90% of the folks at the DMB show, most of whom were CT youngsters in the 20-27 year old bracket, with money to spare and little tolerance for alcohol it seems.  So I was super hot, it was 90 degrees, so I took my shirt off to cool down and hopefully dry off the sweat.  I noticed that this was a move that was drawing attention.  Random young blonde hottie came up and was saying “where’s your shirt?”  I noticed people in the audience pointing me out..  Now I’m not bare chested activist, and certainly the FTN revolution aside, I didn’t think that this was a big deal. But I started to look around- and of the 20,000 people inside, I didn’t see one other dude with his shirt off.  Now I’m no model, and not obese either, just a regular dude, so it was weird.  Has society changed so much that I didn’t know that there was a rule against taking off your shirt when it’s 90 degrees and you’re at a concert?  Nobody hassled me, and after a while I just put it back on, and everything was fine.  I am a tad perplexed though.

We had heard that the show would start with an acoustic set with Dave and Tim Reynolds, so I was not surprised.  They opened with Bartender which had the evocative darkness you’d expect, even in this acou

stic version.  I was however surprised when the band took the stage soon after and they went right into Two Step.  From there they kept up the energy with a cover of Sixto Rodriguez’ Sugar Man, which seemed to make Matthews very happy to play.  The rest of set one included some newer material like the song Sweet from Matthews’ last record, “Way from the World,” as well as classic DMB material like the rousing set closer, Ants Marching.

We palled around our little concert neighborhood, and shared in the good vibes while we waited for the short set break to end.  Now I knew from our last time seeing DMB in this venue, that the second set on that night had featured a ton of special guests.  That was interesting and all, and Dave must have some connection to people in CT as there is an abundance of guest musicians for him here.  But I was in the mood for some solid DMB, and the first set had super delivered on that end of things.

Set two started just as I had wished with a rousing version of Dancin Nancies.  Another cut from “Way of the World” followed with Rooftop, quickly followed by classics One Sweet World and Seven.   You Never Know from the album “Busted Stuff” came next and was super solid.  The set just got better and better as the band powered forth full steam ahead with Crush, Grave Digger  and Jimi Thing.  The band was cooking big time, and the solid lineup of Carter Beauford on drums, Dave on guitar and vocals, Tim Reynolds on lead guitar, Stefan Lessard on bass, Jeff Coffin on saxophones, and Rashawn Ross on trumpet.

The epic jam that was coming out of Jimi Thing was when the guests started to arrive.  This can be a good thing, and can also challenge the audience members if the guests are more to amuse the artists than to amuse the audience.  Out came guest trumpet player Billy Fanning who apparently plays in Coffin’s other band, the Mu’Tet.  He absolutely killed on his solo, spending several minutes stretching out and illustrating his considerable talents.  The band got off on his presence too, and you could really feel them reaching for another gear and collectively they maneuvered slyly into Prince’s Sexy MotherF*cker.. 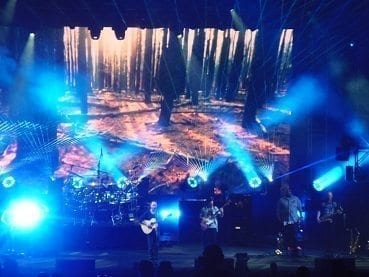 I was nervous however when The Lovely Ladies came out, a trio of female backing vocalists.  It was quite difficult to hear the introductions as Matthews’ diction when not singing is not quite what it could be, but it seemed like the three ladies were named Candace Anderson, Cheri Bryant and Tewala Agee, but as noted in other reviews it could have been other folks as well.  The Lovely Ladies toured with the DMB back a good decade or more ago, and would provide some interesting guest appearances throughout this summer tour.

The new super packed stage ensemble went through Drunken Soldier,  and You and Me before cascading into a fascinating Lizzy Frizzell cover Long Black Veil which allowed the Ladies to stretch out considerably.  At this point I was thinking that for sure the band would go into the most obvious song for these ladies to sing, and they did, absolutely crushing “Before These Crowded Street” single Stay (Wasting Time).  The vocal vamp and interchange between Matthews and the Ladies was stellar and they just really took the vocals to an amazingly high level.  The problem that I had feared regarding meandering music because of special guests was not a problem here, as the Ladies were well versed in DMB material clearly, and really helped the band stay on course through well charted territory, but enabling them to hit the stratospheres.  Perfect guest, they are welcome any time in my opinion.
It would not have surprised me one bit for that to have been the set closer, as the audience and the band had hit such a high already.  But then the opening notes, the distinctive guitar and keyboard lines unfolding, of the Talking Heads Burnin Down the House started to trickle over us, and I wasn’t sure if it was a tease of the real thing.  Another perfect choice for the ladies as the band absolutely killed it, despite this being the first time in some three years that the band has performed this particular classic.  With that, they ended the second set, and proved that the DMB is one of the finest touring bands.
There was a fairly long break before the band came out for their encore, after Carter B tossed out what seemed to be an unending supply of drum sticks to the crowd.  The audience expected the encore, but didn’t do a lot to encourage it-  seemingly more of a tennis crowd than concert crowd, they just milled, expecting the artist to just come out and provide them with their encore!  The DMB weren’t insulted though, and came out for a good twenty minute encore sans guests including So Much to Say, Anyone Seen the Bridge, and finally Halloween. There was even a little fake of Too Much in there.
Let it be said that the stage show really added to the music, with great lights, screens, and movement on stage.  All of it was tasteful and matched both the vibe and the songbook, flashy and fancy, without going overboard at all.  Here is the only criticism I have- and it has nothing to do with DMB.  Xfinity Center, I am calling you out!!  I’ve been going to shows there for ten years.  And for ten years, the video screen for the lawn, second from left out of five, has had a major malfunction.  I quickly calculated that since I first noticed it, some 1 million concert tickets have been sold for the venue. I even pointed this out in my interview of shows in the past.  Fix the stupid screen, will ya?
All in all, a very excellent show.  By my rough count it’s the fourth DMB show for me, spread out over some 13 years. It was by far the best one, filled with excitement, classic DMB material and some new things for me to learn.  The band is at the top of their game, and anyone who remotely likes the band should not hesitate to go and see them. 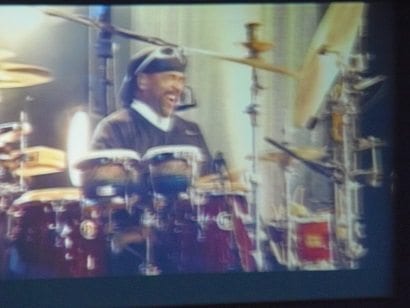 Encore:
So Much to Say
Anyone Seen the Bridge
Too Much (fake)
Halloween